Iowa and Tennessee both appear to have underperformed their talent levels this season. As a result, they will fight to the death tonight for the final spot in The Big Dance.

Share All sharing options for: PRE-GAME FRANALYSIS: IOWA VS. TENNESSEE

Here's your statistical preview for the Tennessee game. I recommend using it to supplement Pat's Franimal Planet preview, which will be up later.

According to just about every website that uses advanced metrics, this is a battle between two Top 25 teams playing for a spot in the NCAA Tournament. Think about that for a moment. That's pretty crazy, right? Just off the top of my head, I was thinking this had to be the highest-rated matchup between two teams (according to advanced statistics) to enter the tournament since the field expanded to 68 teams in 2011. Since the play-in round is so new, I figured it would be pretty easy to figure that out, so I took a look at past play-in games to see how the prestige of this game compared to others past. The results are as follows:

Looks like my initial reaction to this game proved true, as the average combined ranking of both teams based on THOR and Kenpom rank inside the Top 20. The next closest was Middle Tennessee vs. Saint Mary's last year, where both teams averaged out to about #34 in the nation.

So, both Iowa and Tennessee are highly rated by advanced stats, yet both are playing just for the opportunity to make it into the NCAA Tournament? How does that work, you may ask? Well, both teams (according to the numbers) have been unlucky/underperformed their true talent level this season. To show that, here are the fifteen unluckiest teams in the nation based on THOR: 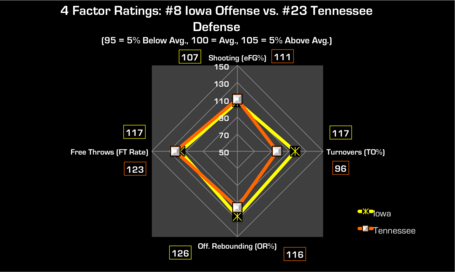 The Volunteers are very solid on the defensive side of the ball, ranking #23 in the nation with a 10% above average DE+ according to THOR. Iowa's offense is, of course, the most dangerous part of their squad, coming in at #8 in the nation with an OE+ of +15%. Really, Tennessee seems pretty well-suited for Iowa's brand of basketball. They block a lot of shots near the basket, they don't foul, and they are good at limiting offensive rebounds. Iowa does rate out higher in the offensive rebounding here, though, so this category would be even more important for Iowa if they aren't hitting their shots or getting to the free throw line. As for turnovers, Tennessee doesn't really force them and Iowa doesn't really give the ball away all that often.

Both teams have advantages in two categories here. Iowa's do seem to be slightly bigger than Tennessee's, though, so I'll give Iowa the slight nod here.

When Tennessee Has the Ball 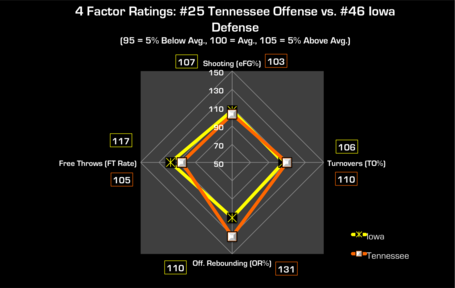 I'll be honest, I have no idea what to expect on this side of the ball. Iowa's defense dropped again after the Northwestern loss (probably not far enough, though), but still has an DE+ of +8%. Tennessee's offense sits at +11%, but does so by essentially not really turning the ball over and by being an offensive-rebounding juggernaut. Their offensive rebounding is 5th in the nation thanks largely to Jarnell Stokes and Jeronne Maymon, who both grab about 15% of all available offensive boards when they are on the court. For context, both are within the Top 20 in the country in offensive rebounding (among eligible players), according to Kenpom.

When it comes to shooting and free throws, however, the Volunteers are a little above average. Iowa is good at keeping teams off the charity stripe, but their weakness lately has been the other teams putting the ball in the cylinder at a ridiculous rate; most of that coming from long range. If it's any consolation to Iowa, this Tennessee team may be a good matchup for them because they aren't huge into three pointers. They don't shoot them all that often and they don't make them all that often. Northwestern was a poor three point shooting team until they went up against Iowa, but they were notorious for jacking up threes all game. That's not the style of this Tennessee team, so let's hope that can help this Iowa defense get something going on this side of the ball.

Of course, there is no way I can pick this Iowa defense to win for the rest of the season. So... 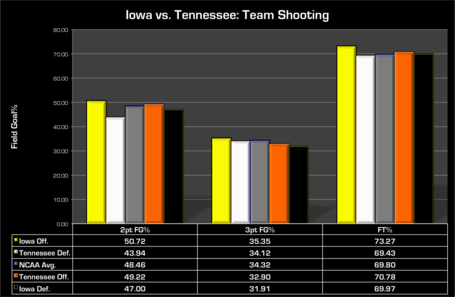 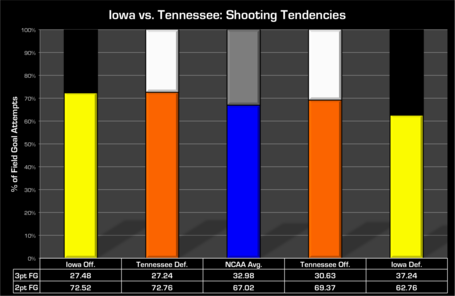 Here, let's hope, is the silver lining for the Hawkeyes. The Volunteers aren't quite as two point-heavy as Iowa is offensively, but they do take about 2% more of their field goal attempts from inside the arc than the average Division-I team. And, if Tennessee is hitting their shots against Iowa, the Hawkeyes have a better chance if they are only giving up twos instead of threes. That is, unless Jordan McRae goes off from long range. 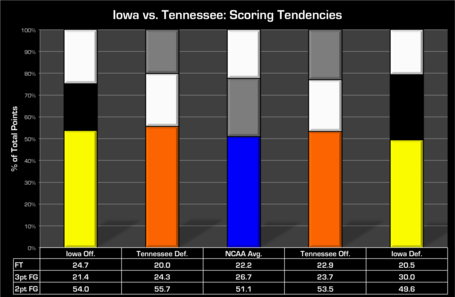 Finally, Tennessee gets their points in a similar manner to Iowa. The only real difference is that Iowa's ability to draw fouls and their tendency to shoot fewer threes has led them to get a larger percentage of their points from free throws, instead of from beyond the arc.

Now, for the dreaded projection... Yes, you are reading that correctly. These teams are so closely rated (111 THOR rating each), that the model is projecting Iowa by 0.43 points on a neutral court. And, once again, I have no idea what to expect in this game. I'm praying for a win, but with the way Iowa has played against lesser teams as of late, this game scares the crap out of me.

For some other projections, Kenpom has Iowa losing 73-75 with a 42% win probability. The Power Rank has a similar projection to mine, picking Iowa by 0.60 and giving the Hawkeyes a 52% win probability. The NCAA Game Simulator seems to like Iowa as well, and actually has them beating UMass and moving on to the Round of 32. And, last but not least, the newly-launched website FiveThirtyEight gives Iowa a 48% chance of beating Tennessee, and if you look at the table, they give probabilities for the Hawkeyes moving on to each round. (I should probably also mention that the Huffington Post has a pretty cool March Madness bracket tool, too.)

Anyway, each projection seems to fit what my main point from above: Who the hell knows what will happen? Per usual, let's just hope Iowa can figure something out for this game. If not, they get no more chances to right this ship.