Is Northwestern's offensive ineptitude just what the doctor ordered for an ailing Iowa defense?

Share All sharing options for: PRE-GAME FRANALYSIS: IOWA VS. NORTHWESTERN

Here's your statistical preview for the Illinois game. I recommend using it to supplement Pat's Franimal Planet preview, which will be up later. 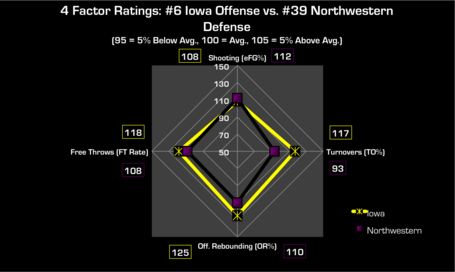 This side of the ball gives us the match up of Iowa's 15% above average offense against Northwestern's 8% above average defense. Northwestern's defense has done everything well this year, except for forcing turnovers. Their ability to pull off upsets this season has been related to their ability to slow down the game on offense and keep their opponents from putting the ball in the basket at the other end. In their 6 Big Ten wins this season, they held the opposing team to less than 60 points in four of them and exactly 60 in one of them. In those games their opponents shot the ball dreadfully from the field, and that includes holding Wisconsin (of all freaking teams) to a 29.23% eFG%.

Needless to say, both times Iowa has faced the Wildcats this year, the Hawkeyes shot 65% and 56% and averaged 1.27 PPP and 1.17 PPP. As for tempo, the first game was more Iowa's speed (74 possessions), while the second was more Northwestern's (65 possessions). Overall, Northwestern's defense is solid this season, but I'm not sure they have an answer for Iowa's offense.

When Northwestern Has the Ball 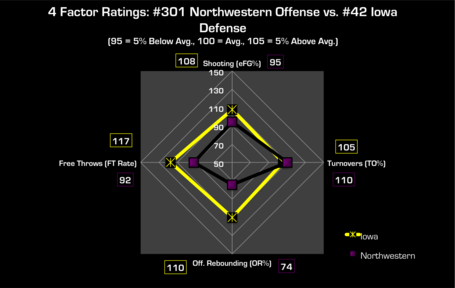 I know that many people see a similarity between this Northwestern team and the Illinois team that spoiled Iowa's Senior Day last Sunday. I get the comparison, but, really, Northwestern's offense is much, much worse. I mean, like eye-bleeding painfully bad, or 8% below the D-1 average, according to THOR. And while Iowa's defense has been quite the eyesore lately, their DE+ is still 8% better than the D-1 norm.

This Wildcat offense sports the 313th quickest average possession time in the nation and shoots the 20th most threes in the country. In other words, it's reminiscent of Iowa's Lickliter years, where they would drain the shot clock and throw up a contested three point shot every possession. And similar to those Lickliter years, the Wildcats don't particularly connect from downtown very often. Both times Iowa played them this year, Northwestern made 43% (eFG%) and 40% of their field goal attempts and came away with 0.91 and 0.77 PPP. If this Iowa defense continues to suffer from fatigue or whatever it is that has been ailing them, those numbers could go up. However, with as bad as Northwestern's offense is this year, I still think this is the best chance for Iowa to finally stop their opponent's streak of averaging more than 1.00 PPP against them at 11 games. 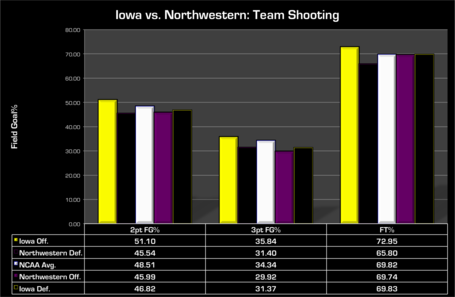 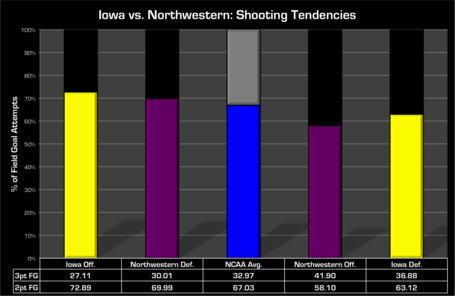 Another game, another team that plays a completely opposite style of basketball than the Hawkeyes do. 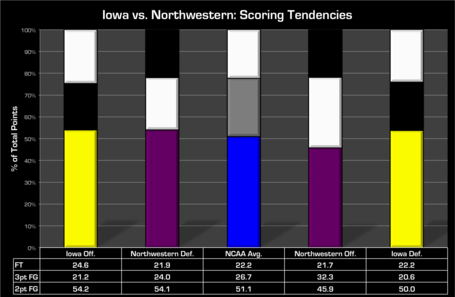 Like I said, it's almost like watching Iowa play an earlier version of themselves under Lickliter, but even he never had an offense rate quite this bad. Although, that 2008 team wasn't too far off... /has PTSD flashback

Northwestern's strategy for this game will be to slow the tempo and pray that some three pointers fall for them. If they can limit Iowa's possessions and hit some of their long range jumpers, they have a chance of making this a game. They still have Drew Crawford, who before being somewhat broken this year was quite the shooter and scorer. And after the way Iowa has played defense in recent times, I wouldn't be totally surprised to see him go off for a career high.

But that being said, I still like Iowa because Northwestern really has nobody else on offense. The extreme offensive ineptitude will hopefully be just what the doctor ordered for this debilitated Hawkeye defense. That won't be the case if the Hawkeyes advance to the second round, as there will be no more offenses they could face that are quite this impaired for the rest of the season. However, we can worry about that on Friday. First, let's hope Iowa doesn't leave us with that painful feeling in our gut yet again.