FRANALYSIS: IOWA CONTINUES FAMILIAR PATTERN, BLOWS IT IN SECOND HALF

Iowa led at halftime, only to throw it away in the second half. Raise your hand if this sounds familiar.

Share All sharing options for: FRANALYSIS: IOWA CONTINUES FAMILIAR PATTERN, BLOWS IT IN SECOND HALF

This team makes my head hurt: 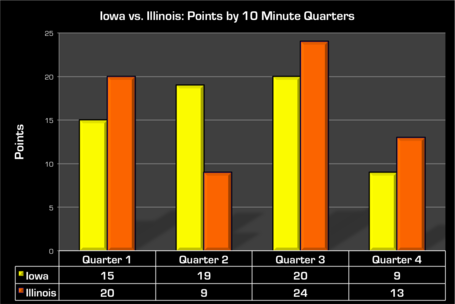 Despite a very sluggish start, Iowa charged back from being down 20-6 and took a 5 point halftime lead. Of course, after the intermission, Iowa was outscored 37-29 for the rest of the game. Essentially, Iowa just flat out lost the second half. They were stuck on 54 points from the 11:17 mark in the second half until the clock reached 6:11. That's a five minute scoring drought where they went from being ahead by 6, to being down by 5, until an Adam Woodbury field goal in the paint made it a three-point deficit.

Iowa was able to tie the game with 0:40 left, as Illinois seemed to be terrified of winning the basketball game. Of course, that was all for show, as Jon Ekey hit Iowa with a theatrical punch-in-the-gut three pointer with 0.5 seconds left. You can't really curse the defense on the play. Aaron White did what you're taught, and had a hand all up in Ekey's face to contest the shot without fouling. If there was anything particularly bad about the last defensive possession, it was Gesell's reach-in foul. This restarted the shot clock and gave Illinois a chance for the final shot. A final shot that they would not miss.

And if it seems like the whole lead-at-halftime-and-lose-the-second-half thing is a pattern in losses this year, you're not just imagining it: 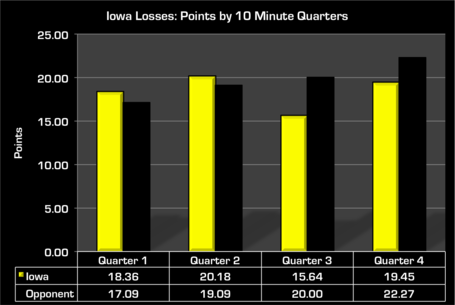 In their 11 regular season losses, Iowa averaged a 38-36 lead in the first half. After coming out of the locker room, though, they were outscored by an average of 34-42; the largest gap coming straight out of halftime. One wonders if it's just coincidence, or if other teams are making halftime adjustments and Iowa can't seem to adjust to these adjustments? Even if we look at just the conference schedule and include the games Iowa won into the equation, their opponents still score slightly more points as the game goes on. The basic pattern seems to be that Iowa' defense gets worse as the game goes on. And for a team that only lost one player from a great defensive squad last year, I find this defensive issue to be incomprehensible. 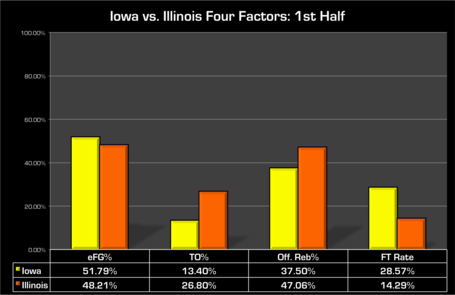 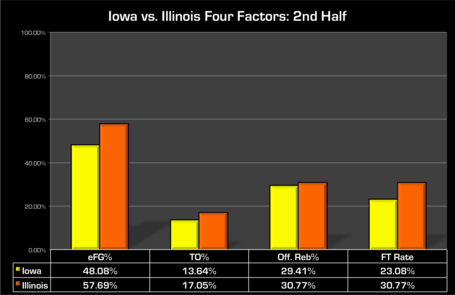 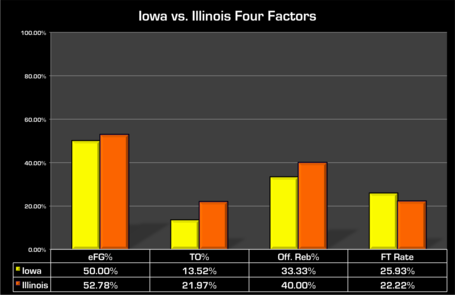 Illinois did a great job of slowing down Iowa's fast-paced offense, limiting them to just 59 possessions. The first time all year that Iowa had been held under 60, and something I said was a big deal for the Illini coming into this game.

Iowa's not a lights out shooting team by any means, but there is no reason they should ever lose a shooting battle to this Illinois team. This is the same Illinois that is 309th in the country and 11th in Big Ten play in eFG%. The Hawkeyes won this battle in the first half and even held Illinois to 0.97 PPP in that period of time. Then came the stupid second half, where Illinois put up an eFG% that was eleven percentage points higher than their season norm and averaged 0.26 PPP more than their season average. I mean, 1.26 PPP to this Illinois offense after halftime is just inexcusable. But we can't just blame the defense in this one either; the offense came away with only 0.99 PPP in the second half thanks to that gigantic scoring drought.

In other words, it took a team effort on both sides of the ball to lose this category.

Turnovers were big for Iowa in this game, as they scored 23 of their 63 points off of them. Unfortunately, there really isn't much more to say about them in this game. Winning this category wasn't enough to win the game.

The Hawkeyes could have really used some more offensive rebounds or even turnovers to try to help offset the shooting disparity in the second half. Unfortunately, that didn't happen.

Free throws aren't a huge part of Illinois' game, so this factor was more important to Iowa, who fell twenty percentage points below their season average in free throw rate against the Illini. As you may have guessed, that's a less than desirable outcome. This category, too, could have helped make up for the shooting disparity in the second half. But again -- nope. Like the other three factors, Illinois won this category after halftime, making it a clean sweep for them in the final twenty minutes of game time.

Technically Iowa won this battle, but they didn't win it by near enough to help them win the game. 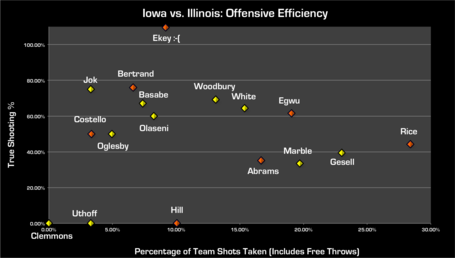 Roy Devyn Marble was held under double figures for the first time all year in Big Ten play. He had a rough night shooting, only making 3 of his 11 shot attempts and scoring just 8 points on about 12 scoring attempts (including free throw possessions). I won't put any blame on Marble, because he's done what he was supposed to for basically every other Big Ten game. It sucks that this was his last game at Carver, but he has nothing to be ashamed of this season.

Aaron White and Adam Woodbury were the most efficient and effective offensive players for the Hawkeyes in this game. White scored 12 points on about 9 scoring attempts. He also pulled down 8 boards, had 2 blocks, and threw down a very nice alley-oop where it looked like he hung in the air forever. If there were any negatives to his game, it was that he did give the ball away 3 times and he also needed 36 minutes on the floor to score his 12 points.

Woodbury, on the other hand, scored 11 points on about eight scoring attempts, four of which came on two (!!!) dunks. Woody scored 10 of those points in the paint, and looked very good doing so. If there was one thing to nitpick, it may have been that he only grabbed two rebounds in 20 minutes of play.

In the end, this game was a frustrating finish to a frustrating end of the regular season. So, it was fitting in a way. The offense bogging down wasn't ideal, but Illinois does have a very good defense this year. Instead, it's the defense that continues to be extremely worrisome as we move into tournament time. They finished the regular season giving up 1.06 PPP to Big Ten teams. They started off the season looking pretty damn good and just got progressively worse. Even in Big Ten play, they looked solid in January, but then February and March hit, and... I'll just let you take a look:

Defensive efficiency (PPP multiplied by 100 possessions) and defensive eFG% are supposed to change pretty dramatically from non-conference to conference play. That means that the December to January jump was expected. However, those numbers shouldn't continue to shoot up every month after that, especially when it's not like Iowa played a much harder schedule down the stretch of the season.

I just don't know what to expect going into March Madness. Right now, the offense has to look like a juggernaut on a regular basis to win anymore. The offense is definitely capable of living up to that billing with pretty frequent regularity, but the margin of error for Iowa has become extremely small. One slip-up or scoring drought and it's another heart-stomping one possession loss. And once the Big Dance starts, that combination of scoring drought and porous defense will mean the end of their season until next November. Right now, it's looking like Iowa is going to need a full-on offensive explosion to make any kind of run in the Big Ten or NCAA Tournaments. They are definitely capable of it, but it will probably require them to find a way to reverse their terrible luck in close games. 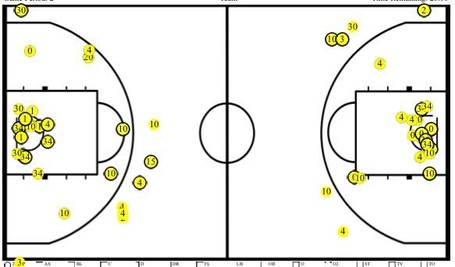 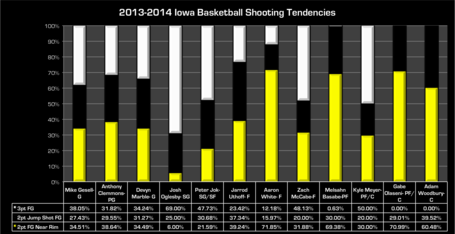 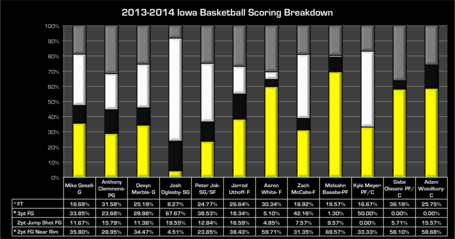