Raise your hand if you thought this would feel like a "must win" game last week?

Share All sharing options for: PRE-GAME FRANALYSIS: IOWA VS. PURDUE

Here's your statistical preview for the Minnesota game. I recommend using it to supplement Pat's Franimal Planet preview, which will be up later.

Yes, Iowa is still ranked #7 despite the recent implosion. Kenpom has them at #12, too. My ratings still seem to have a little more faith in their defense than his do, but looking at this chart, it's difficult not to be concerned: 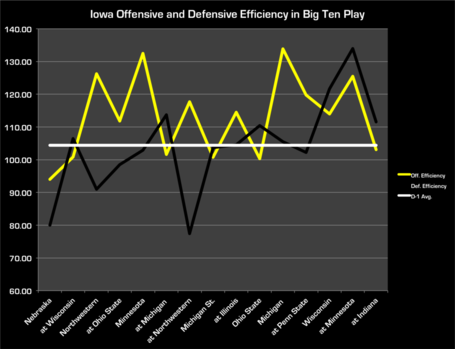 The yellow line is the offense and the black line is the defense. One of those in trending in the wrong direction. 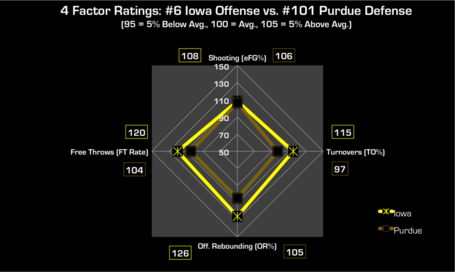 As has been the case recently, Iowa's offense should get their buckets with little issue. Purdue's defense isn't bad, by any means (they are above average), but they only come into this game sporting an adjusted defensive efficiency (DE+) 4% above average. The Hawkeyes, meanwhile, have an offense that rates out at +15% in OE+.

The Boilermakers contest shots well this season, as they are currently 25th in the nation in blocking shots. A.J. Hammons is the gatekeeper to the basket, and is very good at blocking off access to the rim. Unfortunately for Matt Painter and Co., the Hawkeyes seem to have the advantage in the other three categories. Purdue doesn't create many turnovers and the Hawkeyes don't turn the ball over much (the Indiana game aside). Iowa's one of the best teams in the country at offensive rebounding and getting to the free throw line (and the best in Big Ten play in both categories), while Purdue is only 5% above average in defensive rebounding and 4% above average in keeping opponents off the charity stripe.

Iowa should have little trouble on this side of the ball.

When Purdue Has the Ball 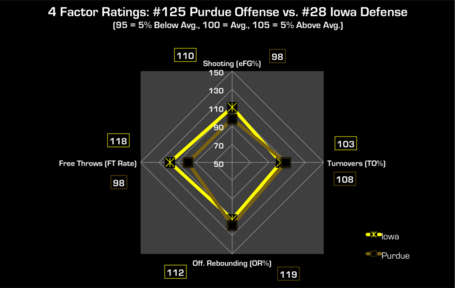 I know defense has been an issue lately, but if Iowa doesn't win this battle on Sunday, then it should be blatantly obvious that the Hawkeyes are some poor character in a Greek tragedy and the Big Ten Gods are just yanking them around like puppets. Purdue's offense quantifies to 3% above the Division I average, while Iowa's defense has fallen from #13 pre-Minnesota game to #28 with a 110 (10% above average) DE+ rating. Even with that drop, the Hawkeyes are still the better unit.

Starting with shooting, Purdue doesn't put the ball through the cylinder very well. Part of that has to do with the fact that they get a lot of their shots blocked compared to the national average, which should be good news for an Iowa team who is one of the best shot-blocking teams in the country. The Boilermakers don't seem able to make up for that poor shooting by drawing fouls, however, so they rely on grabbing a large chunk of their misses. And, actually, Purdue is second in Big Ten play (behind Iowa) in offensive rebounding rate. Iowa is a very good defensive rebounding team, though, so it will be interesting to see how Iowa matches up in this category. As for turnovers, I would expect Purdue to do a pretty decent job of hanging onto the ball.

The categories are split at two apiece, but Iowa's advantages are much larger than Purdue's. 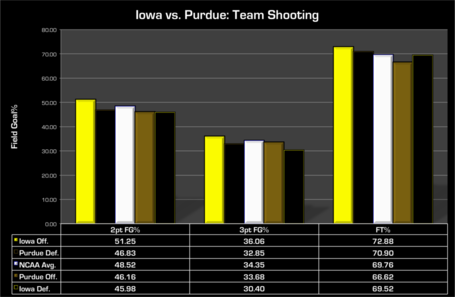 I've already mentioned how Purdue is a below average shooting team, and that even extends to the free throw line. Iowa has the advantage offensively and defensively here. 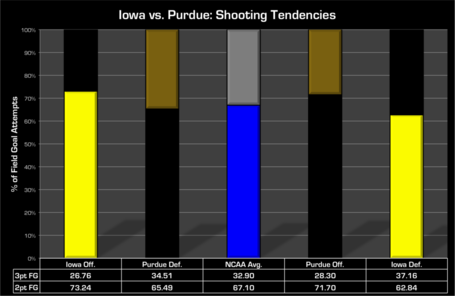 Purdue's offensive style compares pretty closely to Iowa's. Both teams are very heavy on two point baskets, rather than living beyond the perimeter. Even on defense, both teams' opponents have tended to be more three point heavy this season. 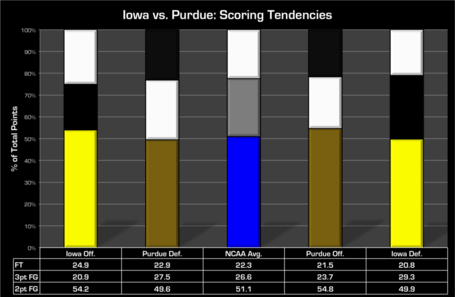 Both teams get about the same percentage of their points from two point range, but Iowa's ability to get to the line makes free throws a bigger part of their offense. In contrast, Purdue getting more of their points from downtown doesn't come from being a better three point shooting team. Instead, it comes from the fact that they shoot them slightly more often that Iowa does and because they just aren't very good at drawing fouls.

The last two games have been very uptempo (83 possessions in the Indiana game!), and this seems like it could be very similar in nature. We already know that Iowa is one of the fastest teams in the nation and is the fastest team in the Big Ten. Purdue's not as transition-oriented as Iowa, but they have had the third-fastest tempo in Big Ten play so far and the second quickest offensive possessions (behind Iowa), according to Kenpom. Hoop-Math, meanwhile, has Purdue fourth in the conference in the percentage of their shots that come in transition at 28.6%. Of course, Iowa is first in the conference with 37.4% of their shots coming in transition.

It will be interesting to see if the game breaks out into a track meet and if Iowa's defense will be able to play better transition defense than they have lately. It will also be interesting to see which obscure Purdue player will be the most recent opposing player to have a career night against this Hawkeye defense.

All kidding aside (kind of), I'm hoping this is the game is where Iowa decides to break out of their whatever-the-hell-this-is. They have a distinct talent advantage in this game, and there is absolutely no reason to lose this game. So, raise your beer and toast to Iowa righting the ship against Purdue. Hopefully, we'll all be drinking in victory and not because we're trying to erase two hours of our Sunday afternoon from our memory.