Name a statistical category, and Iowa won it on Saturday. It was beautiful.

This was as complete a team effort as Iowa has had all season. All year we've heard people talk about how deep the Hawkeyes are, and they really drove it home with this game. This was one of the few games where it didn't seem like any of Iowa's multiple lineups stalled the offense. Devyn Marble had 26 points, the other four starters had 35 points, and the bench even chipped in for 24 points. Iowa put up 43 in the first half and 42 in the second half, and they did it in pretty different fashion in both halves.

In the first half, they shot absolutely lights out from the field. And when that went away in the second half, they started forcing turnovers, continued to grab offensive rebounds, and started getting to the free throw line. Michigan was able to limit possessions like they wanted to, but Iowa countered that by having 11 more scoring opportunities on the day (including free throws), en route to an 18 point victory. And when you couple 11 extra scoring attempts with a 59.48% true shooting percentage (like eFG% but includes free throw shooting), it's not hard to explain how Iowa won in a blowout. 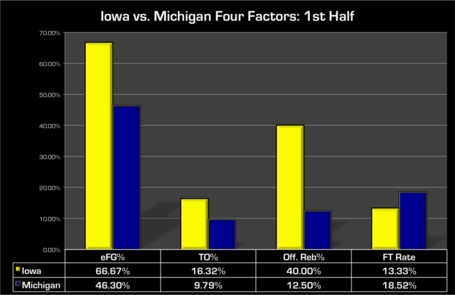 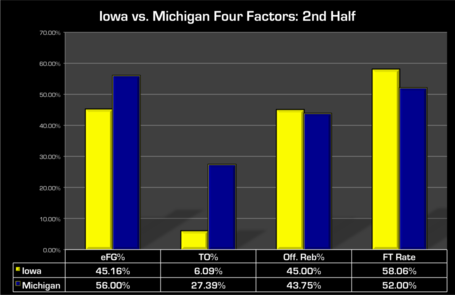 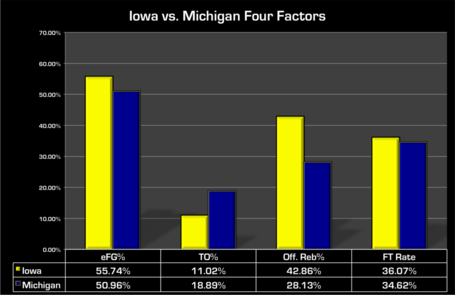 Iowa's 1.34 points per possession is their best mark in Big Ten play so far, just ahead of 1.33 vs. Minnesota last month. For comparison's sake, their third best PPP total was 1.26 vs. Northwestern at home.

This was an extremely odd shooting performance for the Hawkeyes. In the first half, they lit up Michigan with a barrage of three-pointers, thanks to Devyn Marble going 6-9 from downtown, and they finished the first half with a 66.67% eFG% and 1.40 points per possession. That hot shooting performance didn't quite carry over to the second half, but Iowa was able to do enough other things well enough that losing the second half shooting battle still never really made this a game. But overall this was still a crazy shooting performance for Iowa because their 55.74% eFG% was bolstered by 10-17 (58.82%) shooting from long range, which helped make up for going 19-44 (43.18%) from inside the arc.

Also weird (and impressive) was the fact that Iowa held Michigan to a 50.96% eFG%. The maize and blue are one of the best shooting teams in the nation and Iowa held them to about 5% below their season average. Michigan struggled to get things going in the first half, as Iowa was defending the Wolverine high ball screens beautifully. Iowa's bigs were hedging and not allowing Michigan's perimeter guys to get open looks at threes or drive the lane. This allowed Iowa's perimeter defenders to fight through the screen, and then Iowa's bigs were able to recover to their man because the rest of Iowa's defense did a good job of shading toward the roll man off the screen. I wasn't paying as much attention in the second half, but in the first half, the Hawkeyes' defense played extremely well together as a unit and it showed, as they held Michigan to 0.95 points per possession on a 46.30% eFG%. Michigan was able to improve on that in the second half, but Iowa still won the points per possession battle in the final 20 minutes 1.28 to 1.16, thanks to the other three factors.

There were more oddities within the turnover battle, too. We knew coming into this game that Michigan didn't turn the ball over much or force a whole lot of turnovers on defense, so it wasn't much of a shock when halftime came and Iowa only had five turnovers and Michigan had three. Really, it was the second half that seemed like an alternate universe, as Iowa coughed the ball up only twice in the final 20 minutes, while Michigan lost it nine times. That's a lot for a team that ranks in the top 25 in turnover rate in the nation. It also helped mitigate the fact that Michigan was shooting more up to par in the second half and Iowa wasn't. Those 9 second half turnovers left Michigan with 9 fewer possessions to chip away at the Iowa lead.

And, really, I'm not sure what the bigger surprise in this game was: Iowa outshooting Michigan or Iowa turning the ball over less?

The one category that didn't really have any abnormal outcomes was offensive rebounding. I mean, Michigan suddenly started coming away with more offensive rebounds in the second half, but it didn't really matter since they couldn't do the same on the defensive boards. Iowa was expected to take care of business on the offensive glass, and that is just what they did. The Hawks struggled a bit on the defensive glass in the second half, but the bigger picture ended up going according to plan.

In the first half, Iowa attempted 4 free throws and 11 three pointers... And they were winning by 14 at halftime!

Let that sink in for a moment. Go ahead, I'll wait. /plays Jeopardy music

If I would have presented those free throw attempts and three point attempts to you before the game, there's no way anybody would have told me that Iowa would be winning at halftime, let alone by 14. Hell, if someone had predicted that to me before the game, I would have had them drug tested. But while free throws didn't matter much in the first half for either team, they were important for Iowa in the second half, as their 14-18 shooting was able to help offset their 45% eFG%. The increased free throw rate, plus the domination of the turnover battle and continuing to grab a good percentage of their misses made it so Michigan was never able to claw their way back into this game in the second half. 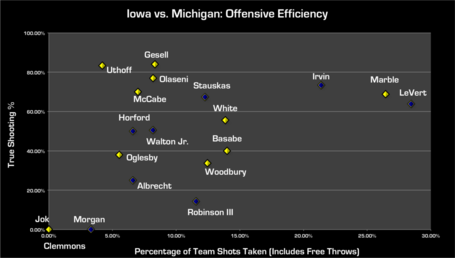 Iowa had 6 players with true shooting percentages (TS%) of 55% or better on the day. Devyn Marble put on a show in the first half, scoring 22 points on just 13 shots, which was good for an 84.6% TS% and 1.69 points per scoring attempt. For reference, Marble is averaging 1.07 points per scoring attempt this season. And while Iowa's points were more evenly distributed in the second half, Marble still finished the game with 26 points in 31 minutes, which was good for his second best points per minute total of the season, 0.84. (He had an unimaginable 1.35 against Abilene Christian.) Like I've said before, anything over 0.50 is star-level, so 0.84 against a team that isn't Abilene Christian is pretty damn insane. Not to mention that his 0.57 overall mark in Big Ten play isn't too shabby, either.

After Marble, the rest of the team contributed to this blowout pretty evenly. Mike Gesell had 10 points, dished 8 assists (only 1 turnover!), and made both of his three point attempts. Gabe Olaseni continued to show why we're all screaming like schoolgirls when we remember that we get to watch him for one more year, as he put up 9 points, 4 rebounds, 3 blocks, and matched 6 free throw attempts (5 makes!) with 3 field goal attempts. And Aaron White also had a solid 11 point, 8 rebound effort, and even threw down a patented ALLEY OOP L'ORANGE.

Even Melsahn Basabe and Adam Woodbury, who both struggled from the floor (including a really strange/hilarious missed dunk attempt by Basabe), still finished with 14 combined points, 14 total rebounds (8 offensive!), and were responsible for 4 of Iowa's 5 made dunks. Jarrod Uthoff and Zach McCabe both knocked down a majority of the shots they took and Josh Oglesby, who didn't do much on offense, played great perimeter defense on Nik Stauskas and Co. In fact, the Canadian prodigy finished with more turnovers (4) than made field goals (3). He had 10 points in total, but limiting him to 1-3 from long range was a huge key to winning this game.

Overall, this was probably my favorite game of the season. (At Ohio State is a close second.) This performance was this team living up to their hype. When some fans and pundits were thinking about jumping off the bandwagon, this victory pulled them back in and attached them firmly to their rumble seats. The Hawkeyes may not win the Big Ten regular season title this year, but make no mistake, this is a top tier team. This team can play with anybody in the country on any given night. And, after this game, they showed they can win against those teams, too. 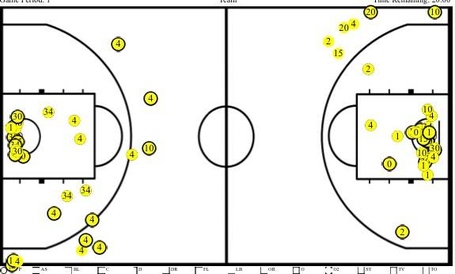 Edit: First half is on left, second half on right. Makes outlined in black, while misses have no outline.