Iowa looks for revenge Saturday, as the Michigan fightin' Beileins come to town.

Share All sharing options for: Pre-Game Franalysis: Iowa vs. Michigan

Here's your statistical preview for the Michigan game. I recommend using it to supplement Pat's Franimal Planet preview, which will be up later.

Also, I should give you a quick primer on how to read the four factor charts below. 100 is equal to the Division I average with each point above or below 100 being equal to 1% above or below the national average. For example: A rating of 105 = 5% above average and a rating of 95 = 5% below average. Basically, the higher the number is above 100 the better a team is in that category. Also, all ratings are adjusted for strength of schedule. 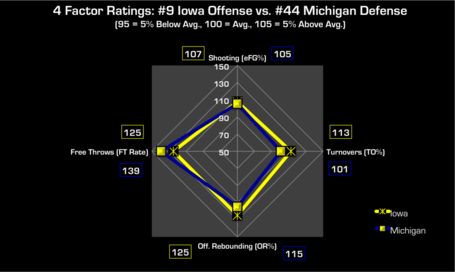 Iowa has at least a slight advantage in three out of the four factors, outside of getting to the free throw line. When these two teams faced off in Ann Arbor a few weeks ago, Michigan held Iowa below their season average in free throw rate, but also did so in effective field goal percentage and offensive rebounding. The Wolverines also forced the Hawkeyes to turn the ball over more than their season average, too. In other words, if Iowa wants to win this game, they need to win the offensive categories they are favored in.

When Michigan Has the Ball 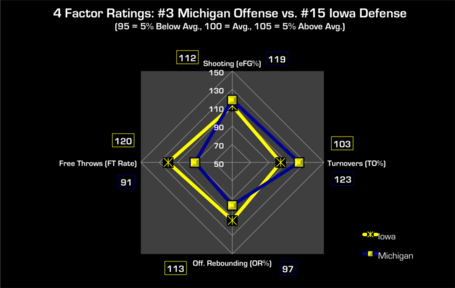 Michigan's offense is pretty damn fascinating. They are #3 in the nation on offense (by my ratings), yet are still below average in two of the four factors. How does that work? Well, they shoot lights out from the field and they never turn the ball over. That's their recipe for success.

Last time around, this match-up shook out just about as expected. Iowa held Michigan to a slightly lower than usual (by Michigan's absurd standards) shooting performance. In addition, Michigan didn't turn the ball over much, didn't get to the free throw line much, and hauled in basically their season average in offensive rebounds. Essentially, Iowa didn't lose the game on this side of the ball. 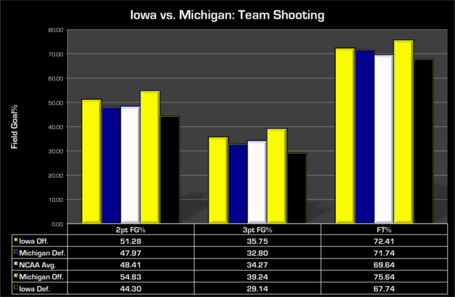 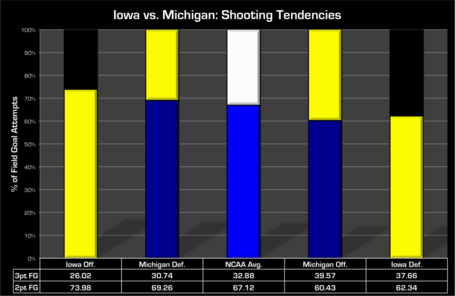 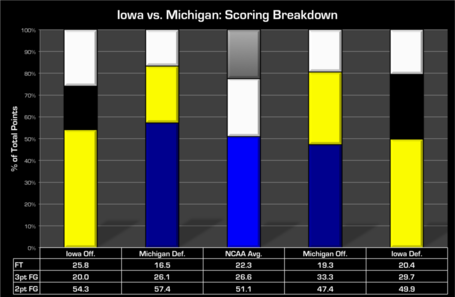 Besides the obviously important three point battle when Michigan has the ball, it's also important to observe how many fewer points than average Michigan's opponents score from the free throw line this year. As we all know, an above-average chunk of Iowa's offensive output comes at the charity stripe. If they can't get to the line against Michigan, they better be shooting well from the field or at least collecting their misses and capitalizing on second chances.

Even though the numbers favor Iowa due to the home court advantage (including Kenpom's numbers), this game still makes me nervous. I'm sure the recent Ohio State game has something to do with that. However, if Iowa wants to win, they most likely can't afford to get into a three point shooting contest, the way they did against Ohio State. They need to stick to their game plan of scoring in transition, attacking the basket, and defending the perimeter on defense. If they can do that, they can win this game. If not, this could be another frustrating home loss.