Franalysis: Iowa Plays Out of Their Element, Predictably Loses

Iowa's blueprint for success this year has been getting to the free throw line and defending the three. They did neither of those things Tuesday night.

Share All sharing options for: Franalysis: Iowa Plays Out of Their Element, Predictably Loses

I'm not going to lie, I was really hoping that this wouldn't be my second Tuesday night  in a row where I stay up late documenting a heart-breaking loss. But, alas, I have terrible luck.

This game had some familiar frustrations for the Hawkeyes (missed free throws), but it also had some unfamiliar ones, too (a lack of free throw attempts, an excess of three point attempts, and an inability to guard the perimeter). And, as much as the familiar frustrations hurt Iowa, I think the unfamiliar ones were what really did Iowa in against Ohio State. 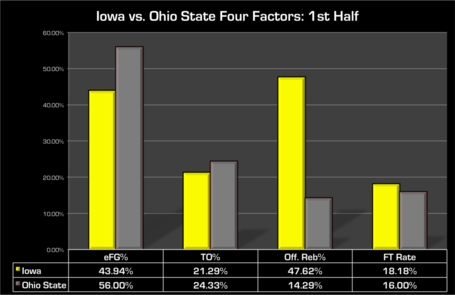 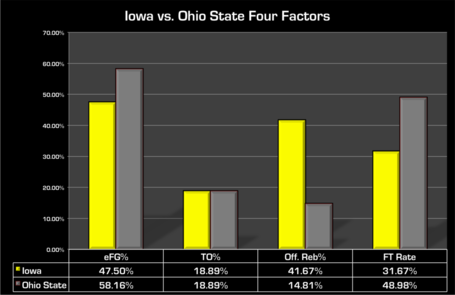 Iowa was able to shoot the ball better in the second half, but it may be a surprise to you just how they did that. In both halves, Iowa was just fine from two point range, shooting 59% and 61%, respectively. In the second half, they mainly improved their shooting from the field by taking fewer threes. In the first half, the Hawkeyes were an ice cold 1-11 from beyond the arc, and while they were only 2-9 in the second half, that was a big improvement in their game plan because it allowed them to play their usual brand of basketball more often. Iowa is not a three-point shooting team, so the fact that they decided to take a third of their shots from downtown (8% more than their season average coming into the game) against Ohio State, who has the best three-point defense in the nation, doesn't make a whole lot of sense. And it really doesn't make a whole lot of sense when you consider that Iowa had the length advantage and it was on display when Iowa wasn't bricking three pointers, with Olaseni putting on a first half clinic and Iowa scoring 40 points in the paint (70% of their non-free throw point total!).

As for the defensive side of the ball, Iowa was able to withstand a 4/8 three-point shooting show from the Buckeyes in the first half and hold them to 0.94 points per possession on a very good 56% eFG% at halftime. The second half was different, though.  Instead of combining a bad points per possession total with a nice shooting performance, Ohio State decided to upgrade to a nice points per possession total and a nice shooting performance. Now, I should mention that Iowa's second half defense wasn't quite as heinous as the 1.27 second half points per possession they allowed. Ohio State's bevy of free throws at the end of the game inflated that number to 1.27 in the second half, but it was roughly 1.04 by my count with about one minute left in the game. But 1.04 PPP is still too much for a defense like Iowa's to give up to an Ohio State team who came into this game with an offense that was mediocre at best. The fact that Craft, Williams, Scott, and Thompson all took at least 8% of Ohio State's shots and had true shooting percentages above 80% reflects poorly on Iowa's defense in this one.

Both teams ended the game with 13 turnovers. Ohio State was more aggressive and physical on defense, and it showed with 10 steals on 13 Iowa turnovers. And for as much crap as Aaron Craft gets anywhere that isn't the state of Ohio, he did have 6 steals (and a lot of other good numbers in his stat line) in this one, and fully lived up to his narrative.

This is the one category Iowa won consistently all game. Ohio State is not a great rebounding team, Iowa is, and that's how it played out. In the first half, the second chances from offensive rebounds were responsible for allowing Iowa to average 1 point per possession while putting up a lousy effective field goal percentage and not getting to the free throw line. In the second half, it was still helpful, but Ohio State found a way to minimize it a bit more. One thing's for sure, though: rebounding didn't cost Iowa this game.

However, you could certainly argue that free throws did help Iowa lose this game. In addition to going 12-19 from the line and missing some crucial ones that might have helped them get back into the game at the end, Iowa's 32% free throw rate was well below their season average of 50% and their Big Ten average of 53%. Iowa's decision to shoot so many threes played like a trade-off of free throw attempts for three point attempts. That's the opposite of what a Fran McCaffery-coached Hawkeye team usually does on offense. Iowa generally does shoot better than 15% from long range, and Minnesota was another game where Iowa shot 20 threes (and, coincidentally, the threes also comprised 33% of their field goal attempts in that game) and made 9 of them. However, the Gophers allow three point baskets to fall 7% more often than the Buckeyes do, so it makes a bit more sense to hoist so many threes against them.

On the other hand, Ohio State is one of the best teams in the nation at keeping opponents off the free throw line. So, really, the Buckeye defense posed a whole host of problems coming into this game for Iowa. I just think that sticking to their normal offensive game plan would have been more beneficial for the Hawkeyes.

Overall: Iowa Won 1 out of the Four Factors 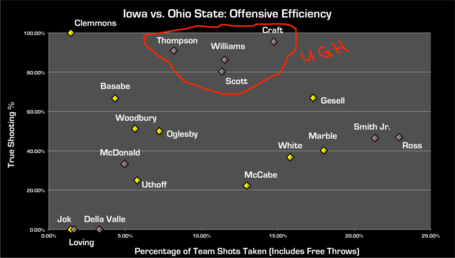 As I mentioned above, the fact that Ohio State had four guys who took 8% or more of the team's shots and made 80% or more of them (including field goals) is a huge disappointment for this Iowa defense. And that's not even counting the fact that LaQuinton Ross and Lenzelle Smith Jr. were also able to score in double figures with a little more effort. This chart does not speak well for Iowa's defense in this game.

Offensively, Gabe Olaseni and Mike Gesell were the main guys for Iowa. Olaseni's 14 points on 5-5 from the field and 4-4 from the line was so efficient that he's literally off the chart. Picture him between Ohio State's Thompson and Williams, having taken 10% of Iowa's shots, but slightly above Clemmons, putting up a 101. 45% true shooting percentage. Gabe was amazing in this one, as he didn't just get buckets his standard way of cleaning up after others' misses. Instead, he showed he was quick enough to take his defender off the dribble and he even showed off a nice 10 foot jumper. In his 19 minutes on the court, he also pulled down 6 rebounds (1 offensive) and blocked 2 shots. How he only spent 7 minutes on the court in the second half... I have literally no idea.

As for Gesell, he was quiet in the first half, going 1-3 from the field, with 3 points. However, in the second half, he was the one guy on offense who tried his damnedest to will Iowa to a win. In the second half, Gesell made 6 of his 8 field goals for 13 points, and, while he may have missed the front end of a one-and-one, he was responsible for 11 of Iowa's final 20 points.

As for Iowa's star players, Marble and White both took their fair share of shots, but just couldn't convert, as you can see on the chart. In the end, White was able to score 8 points and Marble 10, but in 32 and 36 minutes on the court, that is just not enough for players of their caliber.

Also, Zach McCabe played 22 minutes against Ohio State and shot 1-8 from the field, including 1-6 from three point land. Why? Don't get me wrong, I love McCabe to death, but he's not on the court for his defense, and he clearly wasn't providing any offense against this Ohio State defense. To be fair, Fran cut his minutes in the second half from 14 to 8, but Olaseni only played 7 despite the fact that he was actually providing Iowa with offense. McCabe is clearly struggling right now (37.74 eFG% and 24 3FG% in Big Ten play), and Gabe is doing the opposite (63.16 eFG% and 95% free throw rate in Big Ten play), so I don't see why the one playing better isn't getting rewarded as often. I know they don't exactly play the same position, but Gabe's raw athleticism is blooming into basketball talent before our eyes, and it would be a shame if he didn't get more playing time for it.

Okay, that's plenty of words for this game. Iowa didn't play their normal game of basketball (getting to the free throw line and defending the perimeter) and got beat because of it. I caution everyone not to overreact to this loss. Yes, it hurts, but it's not a gigantic upset. Adam had a piece last week about how tough the Big Ten is this year, and a majority of the comments were in agreement that the Big Ten is indeed full of blood and spiders this year. Kenpom continues to have the Big Ten listed as the toughest conference in college basketball this year and many of the remaining games that Iowa plays are probably going to be a little closer than would be our preference. So I suggest that we all keep that in mind. This loss definitely sucks, but it's just another reminder of the cannibalistic nature of the Big Ten this year. 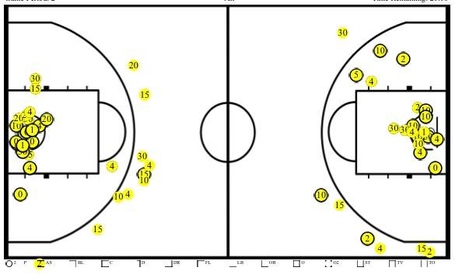 First half on left, second half on right. Makes outlined in black, misses have no outline.