With Aaron Craft and the Buckeyes coming to town Tuesday night, the numbers project the grittiness factor to be off the charts in Carver-Hawkeye Arena.

Here's your statistical preview for the Ohio State game. I recommend using it to supplement Pat's Franimal Planet preview.

Also, I should give you a quick primer on how to read the four factor charts below. 100 is equal to the Division I average with each point above or below 100 being equal to 1% above or below the national average. For example: A rating of 105 = 5% above average and a rating of 95 = 5% below average. Basically, the higher the number is above 100 the better a team is in that category. Also, all ratings are adjusted for strength of schedule.

Due to formatting issues for mobile phones last time, the infographic is available here. 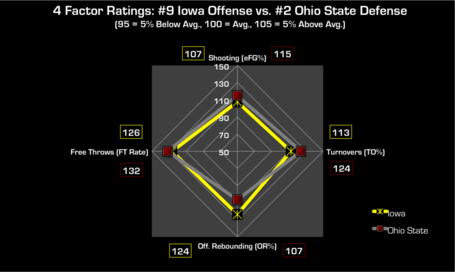 This side of the ball is Ohio State's strength. They are well above average in all four factors, and are higher rated than Iowa in all but rebounding. Don't be surprised if Iowa doesn't score their usual lot of points in this one.

When Ohio State Has the Ball 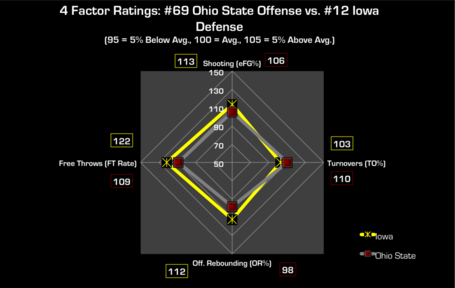 This is where Iowa should win the game. #69 in the nation on offense isn't bad, but it's not what we are used to seeing from Ohio State in recent years. Iowa may not force many turnovers, but they have the advantage in shooting, rebounding, and free throw rate. 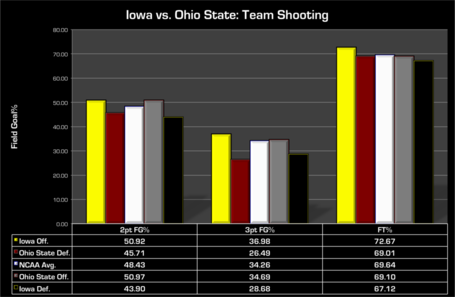 You can see why this could be a defensive battle. Both teams are very good at not allowing their opponents to shoot a high percentage. 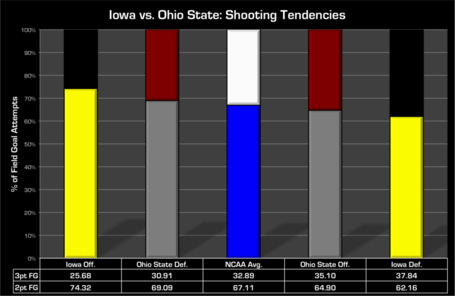 Another game, another team that is more perimeter-oriented than the Hawkeyes. (Again, not a bad thing.) 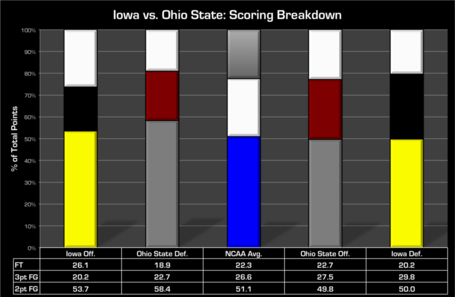 Because both teams have very good defenses, the numbers project under 1 point per possession for both teams. However, because Iowa has the better offense of the two teams, they should be able to put up more points. It also doesn't hurt that the game will be played in Iowa City, either.