Monday means new polls and new polls means new POLL WATCH.  What happened to Iowa after losing an OT heartbreaker against Michigan State in mid-week and then beating the Big Ten's worst team on the road on Saturday?

Iowa moved down two spots in the AP Poll, dropping to 17th from 15th after their loss to Sparty.  The biggest gainers at Iowa's expense were Duke (up 6 spots thanks to a dominant road win over Pitt and a did-you-see-THAT OT loss at Syracuse), Creighton (up 8 spots after a narrow home win over St. John's; perhaps a delayed reaction to Creighton obliterating Villanova a few weeks ago?  News from Omaha takes a while to reach the coasts.), and Saint Louis (up 6 spots after home wins over Richmond and George Mason last week).

Noticeably absent from the AP Poll?  B1G teams.  Outside of Michigan State, Michigan, and Iowa, the poll is bereft of Big Ten teams; perhaps the never-ending cannibalism that's going on in conference play among the Big Ten's middle class this year has finally caused pollsters to throw up their hands in despair when it comes to assessing the nation's toughest conference.

Iowa fell just one spot in the Coaches Poll, dropping from 12th to 13th.  Duke and Creighton again hopped ahead of them in that poll, as did Cincinnati (up 8 spots after a road win over Louisville and a home win over South Florida).  The Coaches aren't willing to quit the Big Ten's middle class just yet, though, as Wisconsin and Ohio State are clinging to the last two spots in the top 25 this week. 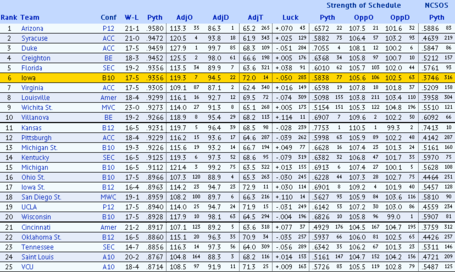 Iowa dipped slightly there as well -- from 4th to 6th -- but they still have a very lofty ranking.  Meanwhile, five B1G teams (Iowa, Michigan State, Michigan, Ohio State, and Wisconsin) continue to sit in the top 20 of his ratings, just ahead of the ACC, who has four teams in the top 20 (although they have the edge at the top, with all four teams ranking in the top 12 of the most recent ratings).

And in the rankings that truly matter in terms of NCAA Tournament placement, Iowa dipped slightly in the RPI rankings: 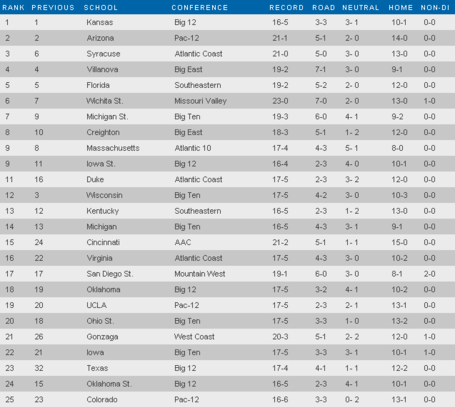 Iowa dropped just slightly -- from 21st to 22nd.  This week brings a pair of games against RPI Top 20 opponents (Ohio State and Michigan) so wins in those games should pull Iowa up these rankings.

Also, in terms of Iowa's records versus certain groups within the RPI rankings...

Iowa's wins over Xavier and Notre Dame lost RPI luster this week, but those two wins over Northwestern look better and better and UTEP is moving up the RPI rankings as well, which is nice for Iowa.  Again, it sure would be nice to add a few more wins over RPI Top 25 teams this week so we could improve that 1-5 mark.