Iowa had no idea, but they were walking into a buzz saw when they stepped into Williams Arena Tuesday night.

Richard Pitino is a genius! Genius, I tell you! The man is brilliant!

After failing to score more than 54 points in any of their last three games, the Gophers exploded for almost double that against Iowa on Tuesday night. How did they do it? Well, Pitino, being the basketball prodigy that he is, decided to have his team tank the previous three games (and still beat Northwestern, of course) and conserve those reserve points for their upcoming game with Iowa. Why? Because Minnesota really hates Iowa. That's why. 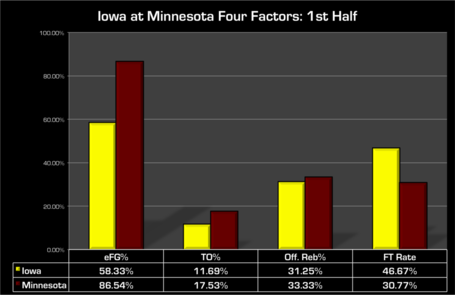 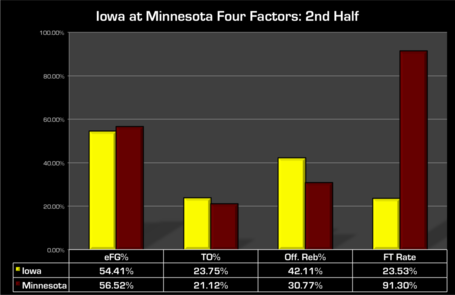 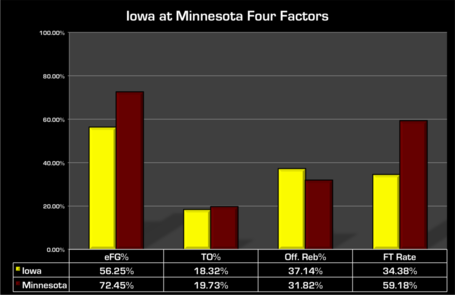 Honestly, I'm not sure I can summarize Minnesota's shooting performance without suffering Post-Traumatic Stress flashbacks. I'll give it a shot, though.

This game started off innocently enough. The first ten minutes saw Iowa leading 19-16. I mean, no big deal, right? Then, BOOM. Minnesota went off and exploded for 35 points to finish off the half: 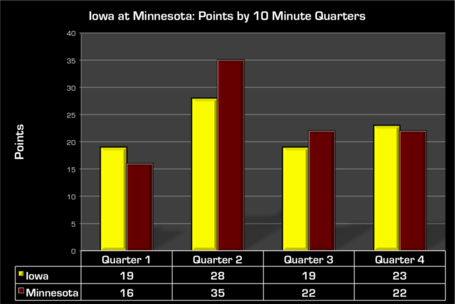 Sure, Iowa put up 28 points themselves, but Minnesota eventually took a 42-41 lead with 2:48 left in the first half, and they would not relinquish that lead for the rest of the game. Minnesota shot the ball extremely well all game, starting the contest 6-11 from the field in the first ten minutes of game time, with a 63.64% eFG%. However, what they did over the final ten minutes of the first half was just beyond belief. The Gophers finished the quarter by hitting 12 of their last 15 shots, including 7 of 9 three point attempts (Charles Buggs, LOL), for a ridiculous 103.33% eFG% (Yes, if you hit enough three balls, you can be over 100% in eFG%). Thanks to this NBA Jam-like on-fire shooting streak, the Gophers finished the first half with 1.49 points per possession (PPP), making Iowa's great-under-any-other-circumstances 1.37 PPP look unimpressive.

The Gophers would cool off in the second half, but that isn't saying much, as they still outshot Iowa from the field 56.52% to 54.41%.

Considering Minnesota put up 95 points on just about 12 fewer shots that Iowa (including free throw attempts), I'll let you go ahead and guess who was more efficient on the night.

In the first half, neither team turned the ball over a whole lot. In the second half, both teams upped their totals, but it seemed to affect Iowa more. Fran's crew struggled to get defensive stops against a Minnesota team that seemed to be under the influence of PEDs, and it seemed that every time they got a stop in the second half, the Hawkeyes would oblige by giving the ball back to the Gophers via a turnover. For instance, Zach McCabe pulled down a defensive rebound at one point and was immediately stripped by DeAndre Mathieu. Another example was Gabe Olaseni picking up offensive fouls on consecutive Iowa possessions, as he failed to get his feet set while trying to set a screen. Basically, the entire second half for Iowa seemed to go like this: Make a basket, give up a made basket. Get a defensive stop, promptly give the ball back via a turnover.

Iowa had one less turnover than Minnesota did, so they win this category overall. But Iowa's second half turnover problem was a bigger issue for them, considering they weren't the team shooting over 70% from the field.

I don't have a whole lot to say about this category. Both teams shot the ball really well, so offensive rebounding wasn't quite as as important as it would have been otherwise. But it was definitely more important to the Hawkeyes, who needed those second chance opportunities to hang with the hot-shooting Gophers.

The Hawkeyes did win this category, but I think they still missed Melsahn Basabe's presence on the boards. If Basabe wasn't under the weather, I think Iowa would have won the rebounding battle more convincingly than they did. But, again, that doesn't really matter when the opposing team shoots better than 70% from the floor.

Per usual, free throw rate is the category that is the most easily inflated of the four factors, and this game is no exception to that rule. Iowa had the upper hand in the first half, and looked like they would have little trouble getting themselves to the charity stripe for the rest of the game. Then, the second half tipped off, and they only saw themselves at the line 8 times after halftime. Of course, I should mention that Minnesota took 14 free throw attempts in the final 1:10 of regulation, so their second half free throw rate was closer to 30% as opposed to the 91% that you see above. That means that Iowa most likely would have won this category had they not been in the position to have to foul at the end of the game. But that's how the game goes, and Minnesota wins the free throw battle. 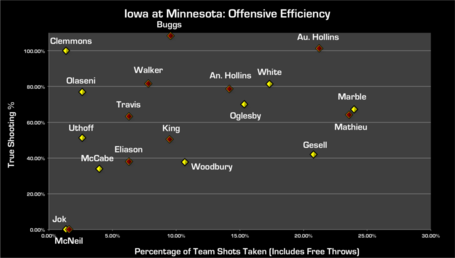 I apologize if the chart gives you painful flashbacks, but it's necessary to explain that, as a team, Minnesota finished the game with a 75.67% true shooting percentage (TS% is like eFG%, but includes free throw shooting). Austin Hollins put up the best offensive performance I've seen all year, as he was responsible for 21% of Minnesota's shots and came away with a 101.31% TS%. Hollins killed Iowa from outside, going 4-6 from downtown, but was also able to get to the basket and get to the line, finishing 7-7 from the free throw line.

In addition, DeAndre Mathieu was a genuine pain in Iowa's backside as well. The speedy guard constantly found himself breaking down Iowa's defense off the dribble, penetrating into the paint, where he scored 12 of his 19 points. Anthony Clemmons may have proved more effective one-on-one with Mathieu than Mike Gesell, but Iowa couldn't afford to give away offensive points with the way Minnesota was shooting.

Now a few words about the Iowa players. Let's start with Devyn Marble, who had a Minnesota-like first half, scoring 19 points on 7-11 shooting and 4-6 shooting from beyond the arc. Marble was quieter in the second half, but still finished the game with 24 points and 6 assists. He had a couple of turnovers in the last four minutes of the game that were particularly hurtful to Iowa's comeback attempt, but he wasn't the only Hawkeye bitten by the turnover bug toward the end of the game.  And, despite the turnovers, it should be noted that the second generation Hawkeye is now averaging 0.57 points per minute in conference play (remember, anything over 0.50 is star-level) and is averaging 18.29 points per game in Big Ten play, up from 15.31 points per game in non-conference play. In other words, Marble is the heart and soul of this team.

Aaron White bounced back from a rough game against Wisconsin, finishing this one with 21 points on 8-11 shooting from the court (1-1 from three point land) and 4-4 from the line. He also came away with 9 rebounds (4 offensive) and three steals, all of which ended in a fast break lay up, a fast break dunk, and a Devyn Marble three pointer. White had fallen from star-level to solid production for Iowa in February, so it was nice to see him get back to being the ginger ninja that we all know and love.

Josh Oglesby continued his hot shooting in this one, scoring 16 points on 5-10 shooting (4-9 from long range) and even came away with two steals on defense. With a 63.46% eFG% and 46.94% 3pt FG% on the season, I think it's time that we acknowledge that Oglesby is a starter on next year's team. Now, I say that because last year most of us would have thought that if he was a starter, it would be because he was a senior and Iowa had nobody better. Instead, Oglesby will be the starting shooting guard next year because he is a damn good player. He looks like he could be an Iowa version of Blake Hoffarber or, if he develops even further, Jon Diebler. That makes Iowa a pretty interesting team come next season.

Mike Gesell took a good percentage of Iowa's shots in this one, and while he may not have been the most efficient with them, he did put up 13 points on 6-15 shooting. He struggled from deep, going 1-5 from three point distance, but was able to slice and dice his way into the lane and make layup after layup on the Gophers. He was also responsible for 6 of Iowa's 17 assists on the night. He's still young, but Gesell has made huge strides at getting to the rim this season. Last season he was more of a perimeter player, but this year he seems to be fully embracing Fran's run-and-gun style, and looks like a great fit for this system. I, for one, am glad we have two more seasons to watch him do his thing.

Finally, the rest of the team didn't do much offensively. Anthony Clemmons, Peter Jok, and Jarrod Uthoff played limited minutes. Gabe Olaseni failed to make much of a mark on this game, minus the two consecutive offensive fouls he had called on him in the last seven minutes of game time. Meanwhile, Adam Woodbury went 2-7 from basically right at the rim (although he did continue to hit his free throws, at least) and Zach McCabe continued to struggle with shooting the ball and not getting called for fouls.

All in all, I'm not upset about losing this game the way I was when Iowa lost to Wisconsin. Iowa's offense played just about how we all expected them to, while the defense seemed to be the recipient of some extremely bad luck. I mean, yes, the defense continued their streak of allowing their opponents to average more than 1.00 PPP in the month of February. And, yes, DeAndre Mathieu consistently embarrassed Iowa off the dribble. However, 11-19 from downtown is just a wee-bit lucky, especially that whole 7-9 from long range in the final ten minutes of the first half for Minnesota. Iowa's offense did their job, but their defense was just in the wrong place at the wrong time.

Most Big Ten teams have experienced tough times at least once this season, and this seems to be Iowa's turn to face a bump in the road. Unfortunately, the Hawkeyes' time seems to have come at the end of the regular season, which is probably the worst time to have a hiccup in their performance. 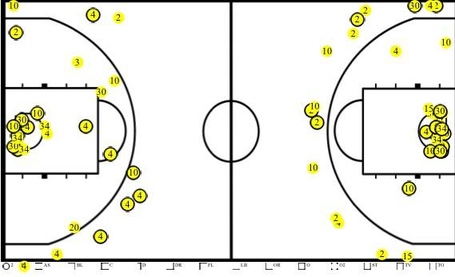 Makes outlined in black, misses have no outline. First half on the left, second half on the right.