After Saturday, a Big Ten title is no longer in the cards for the Hawkeyes, but they are still playing for a high seed come tournament time. Can they avoid another Tuesday night let down?

Share All sharing options for: Pre-Game Franalysis: Iowa at Minnesota

Here's your statistical preview for the Minnesota game. I recommend using it to supplement Pat's Franimal Planet preview, which will be up later. 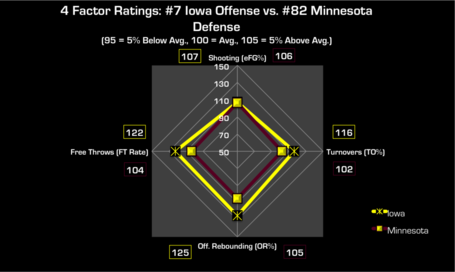 The offensive side of the ball is where the Hawkeyes hold the real upper hand against the Gophers Tuesday night. Iowa's offense comes into the game at 15% above average in adjusted offensive efficiency (OE+), while Minnesota owns a 5% above average adjusted defensive efficiency rating (DE+). The maroon and gold match up with Iowa fairly well in the shooting category, but Iowa has significant advantages in the the other three factors. The Hawkeyes should be able to get to the free throw line, come down with offensive rebounds (depending somewhat on Basabe's health), and shouldn't give the ball away all that much.

Overall, this is the side of the ball I feel most comfortable with.

When Minnesota Has the Ball 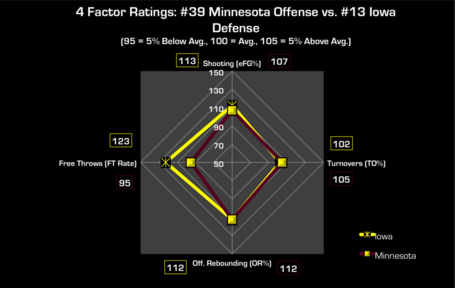 Flipping over to the other side of the court, the matchup gets a little closer. Minnesota's offense is better than their defensive alter ego, grading out at 8% above the D-I average in OE+. Iowa's defense still rates higher, though, with a +12% DE+.

Richard Pitino and his wild pack of rodents are much more deliberate on offense than the Hawkeyes are, ranking 278th in the nation in tempo and 206th in average offensive possession time this season, according to Kenpom. Additionally, 27% of their shots this year have come in transition, as opposed to Iowa's 37% (Now that I realize not every stat at Hoop-Math is subscriber-only this year, I will probably be quoting it a lot more). And when Minnesota does get out in transition, 40% of their shot attempts are threes, compared to only 31% for Iowa. So, the style of play may at least partially explain why the Gophers are 5% below average when it comes to getting to the free throw line.

Minus the free throw battle, though, the other three factors seem pretty close. Iowa's main advantage is being one of the best team's in the country at contesting shots this season. If that holds up, and they battle the Gophers to a draw on the defensive glass, they have a good chance at winning the fight on this side of the ball. I already documented how Iowa's defense has been trending in the wrong direction this month, but even so, I still think Iowa has the edge here. 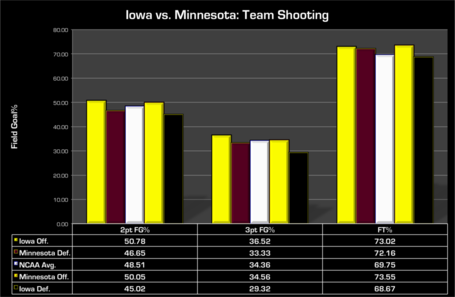 Taking a glance at the shooting chart, we see that both teams shoot and defend better than the national average inside the arc. The same goes from beyond the three point line, but Minnesota seems to be closer to average, while the Hawkeyes are further above the national norm. 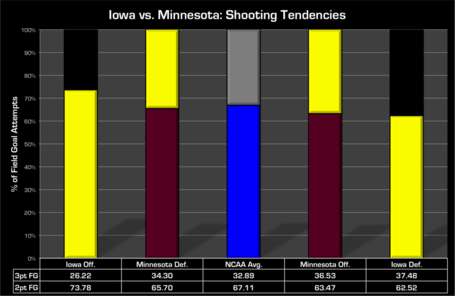 Due to the difference in tempo, you can see the difference in shot selection by both teams. Minnesota attempts a three pointer on about 4% more of their shots from the field this season than the average D-1 college basketball team. Iowa, of course, likes the run and gun style of play, preferring layups to threes. 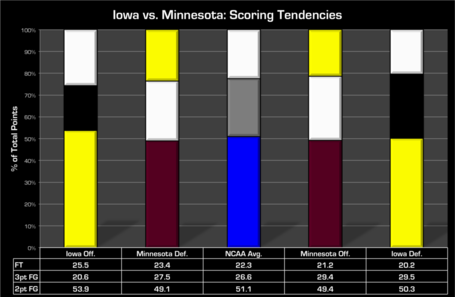 And, per usual, because of the difference in shooting tendencies, the scoring tendencies pretty much follow suit.

The last time these two teams saw each other, Iowa was able to take Minnesota out of their half-court element. The game ended with 71 possessions between the two squads, which compared to Minnesota's season average of 62.3 per game in conference play, that's something Richard Pitino wants to avoid at all costs this time around.

Minnesota's hit a bit of a rough stretch lately and doesn't look quite as scary as they did early on in Big Ten play. Needless to say, that doesn't mean the Hawkeyes should take anyone for granted, especially nobody in the cannibalistic Big Ten this season, and especially on the road. But, home court advantage for the Gophers aside, I still like Iowa to bounce back after a tough loss over the weekend. I don't think they will keep Minnesota to under the projected 1.00 PPP (although, that would make me very, very happy), but I do think they play just enough defense that the ever-reliable offense carries them to the win.