The Iowa/Wisconsin rivalry is currently at an all-time high, and based on how last month's game in Madison played out, I'm sure Fran and the Hawkeyes are ready for round two.

Share All sharing options for: Pre-Game Franalysis: Iowa vs. Wisconsin

Here's your statistical preview for the Wisconsin game. I recommend using it to supplement Pat's Franimal Planet preview, which will be up later.

When: Saturday, February 22nd, 11:00 AM CT
Where: Carver-Hawkeye Arena 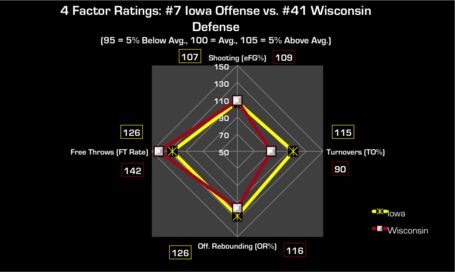 This season Wisconsin isn't quite the defensive juggernaut they've been over the past couple of years, but they're still nothing to dismiss, either. Bo's crew comes into Saturday's game #41 in the nation with an 8% above average adjusted defensive efficiency (DE+), with their only real hole being that they don't force turnovers. Seeing how Bo Ryan defenses traditionally don't force turnovers all that much anyway, this is nothing new. 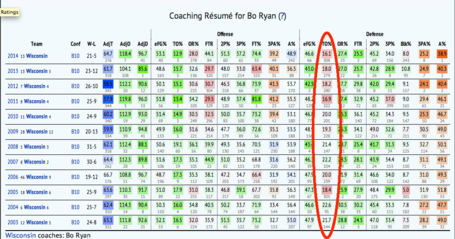 Meanwhile, Iowa's 7th ranked offense (15% above average OE+) doesn't really turn the ball over, meaning the Hawkeyes should have more possessions to try to convert into points. And with Wisconsin's defense matching up with Iowa pretty well in the shooting and free throws categories, Iowa's superiority in turnovers and rebounding should be enough to give them the edge on this side of the ball.

When Wisconsin Has the Ball 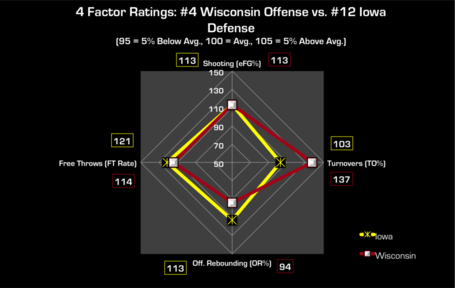 While Iowa is projected to win the battle when they have the ball, the fight gets extremely competitive when Wisconsin is dribbling the rock. The Badger offense currently owns a 116 OE+ rating (16% above average), while the Hawkeye defense sports a 112 DE+ rating. Wisconsin puts up big offensive numbers by shooting a high percentage from the field, drawing fouls, and basically never turning the ball over. They don't haul in offensive rebounds all that well, but, like Michigan, they make up for it by rarely missing.

Luckily for Iowa, the Hawkeyes match up pretty well in the shooting category, so if Wisconsin's shot isn't falling, they should have little trouble pulling down the misses. They also match up with Wisconsin well in the free throw rate battle too, so while Wisconsin may have the slightly higher-ranked unit overall, I think this battle may be too close to call with the game being played in Iowa City. 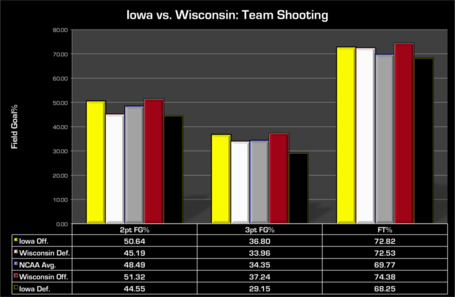 Both teams bring high-powered offenses into this game. Wisconsin, though, is the superior shooting team, while the Hawkeyes have been stingier when it comes to allowing points this season. 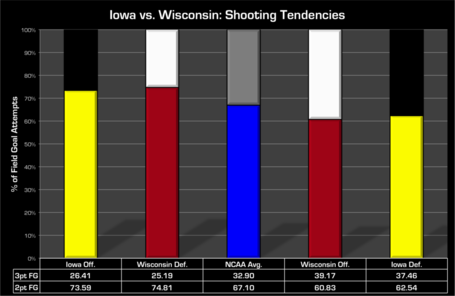 I really like this chart because both teams' offenses appear to personify the defensive tendencies of each other. On the season, Wisconsin's average opponent has leaned toward scoring more from two point range, like Iowa has. The Hawkeyes' opponents, on the other hand, have been more perimeter-oriented, like the Badgers. 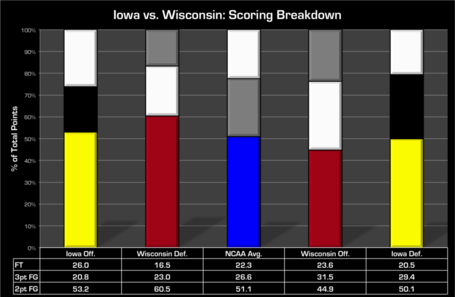 The scoring profiles do differ, however, as Wisconsin's lack of fouling really comes through on this chart, showing just how difficult it may be for Iowa to get to the line in this one. But Wisconsin's effort to funnel everything inside the three point line seems to be right up Iowa's alley, while Iowa's effort on defense to do the same thing may not be exactly what the Badger offense has in mind.

With this game being at Carver I feel more comfortable than I probably should, considering how Iowa played against Michigan State and Ohio State at home. With that being said, though, those two teams had top 15 defenses (Ohio State #2, Michigan State #15 by my ratings) and they were able to frustrate Iowa's offense in ways I don't think Wisconsin will be able to do. I think Iowa's offense should be just fine in this one, and I think Iowa's defense will be the key to this game. If they are able to contest Wisconsin's shots, they have the advantage on the defensive glass. Missed shots will be important since Wisconsin doesn't turn the ball over (ever), and guarding the perimeter is especially important against a team that loves to shoot the three and makes them at a very efficient rate.

If Iowa can hold Wisconsin to a shooting performance that is a little below their norm and keep them off the free throw line, I wouldn't be surprised if we saw Iowa come away with a double-digit victory. However, if Wisconsin is their normal three point-draining, foul-drawing selves, this could go down to the wire or even be another heart-breaking home loss for the Hawkeyes. So, let's all hope for the former, yeah?