Franalysis: Iowa Grinds Out a Win in Champaign

The first ten minutes and the last ten minutes were pretty much what was expected. That middle part, though...let's agree to never speak of that again.

Share All sharing options for: Franalysis: Iowa Grinds Out a Win in Champaign 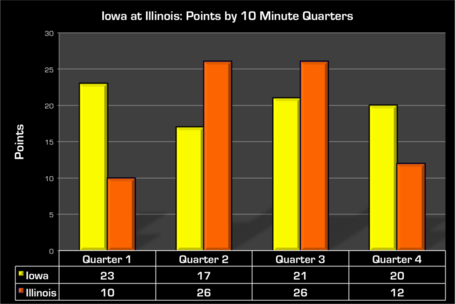 This was (pretty much) a game of four quarters. Iowa was fairly consistent on offense in all four quarters, but they paired a nice offensive performance with a bipolar defensive one on the other side of the ball. At the beginning and the end of the game, everything went as expected; Iowa played good defense and Illinois was absolutely terrible on offense. The middle part of the game, though... Well, that was something alright. Something that I highly doubt Fran would use nice words to describe. 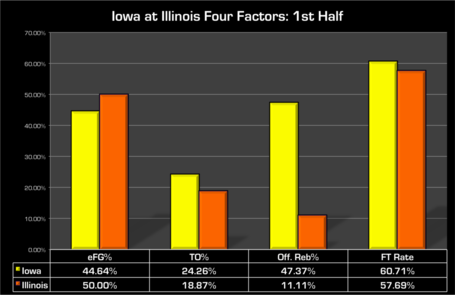 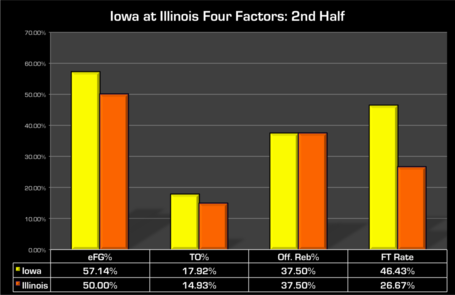 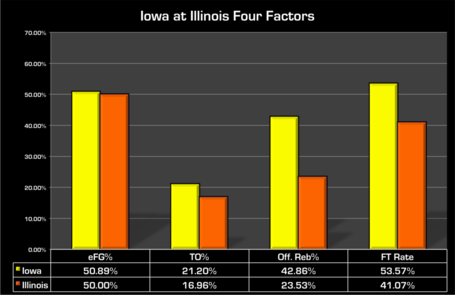 "The BTN announcers referred to this as an Iowa blitzkrieg, and they were right. Iowa was bombing the hell out of Champaign."

After halftime, Illinois came out on fire and, with 8 minutes left in the game, grabbed the lead and also reached their peak effective field goal percentage of 60% and their peak points per possession of 1.18. However, as Pat already mentioned after the game, Illinois finished the game 1-10 from the field which lowered both their effective field goal percentage to 50% and their points per possession to 1.05 for the game. Iowa, on the other hand, finished strong and ended the game with 1.14 points per possession and a 50.89% eFG% thanks to a second half shooting performance of 57.14%. More importantly, of course, they also finished with more points. Analysis! Advantage: Iowa (By a Hair)

Turnovers were a bit of an issue in the first half for the Hawks. They were able to cut them down in the second half, as was Illinois. But, while Illinois may have won the turnover battle in general, they probably had the two most costly turnovers of the game.

The first came with 4:27 left in the game with Iowa trailing 68-70, when Illinois fumbled an inbound pass and Mike Gesell found Devyn Marble for a layup to tie the game. (He was also fouled, but missed the free throw.) This turnover was particularly significant because it would be the last time Illinois would hold the lead. The next big turnover came a few minutes later when Illinois' Bertrand tried to kick it back out to Rice on the perimeter. Marble, though, was playing the passing lane, swatted it away, and took off for the fast break layup and the foul. (He made this free throw!) That turnover was huge because it extended Iowa's lead from 1 to 4 with 1:39 left in the game, and basically put the game out of reach for Illinois. So, yes, Illinois did technically win this category, but two of their turnovers were more costly than any of Iowa's. Advantage: Illinois

In the first half, Iowa dominated the rebounding battle, grabbing 9-19 available offensive rebounds (47.37%) and 16-18 available defensive rebounds (88.89%). The second half ended up being a draw with each team hauling in 6 offensive boards and 10 defensive boards. The first half was enough to give Iowa the overall advantage, though. Advantage: Iowa

This was actually pretty even throughout the entire game. Iowa's second half free throw rate is a bit inflated due to Iowa shooting 6 free throws in the final minute of the game. Really, Illinois, one of the worst team's in the nation at getting to the free throw line, hung with Iowa, one of the best teams in the nation at getting to the free throw line. Throughout the game, Iowa struggled to keep Illinois' quick guards out of the paint, which, in addition to allowing Illinois to be nearly even in points in the paint with Iowa, it also led to their guards and big men getting to the free throw line at a decent clip. Of course, in the end, Iowa did come out the winner in this category. Although, the fact that this category was so close was pretty surprising from a pre-game standpoint. Advantage: Iowa

Overall: Iowa Won 3 out of the 4 Factors 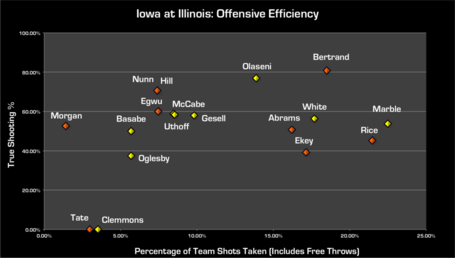 (Note: Woodbury isn't listed on the chart due to the fact that his true shooting percentage was 101.69%. Picture him basically where Clemmons is at, only off the chart. Also, that rare dunk we saw last night, was the first of the year for him and the fifth of his career. 3.94% of his career baskets have been dunks. Let's do that more often, Adam.)

Olaseni finished the game with 15 points (9-10 from the line!), 12 rebounds (6 offensive!), and 2 blocks. Olaseni was important to Iowa's offense in the first half when Marble went scoreless, coming away with 4 offensive rebounds and getting to the line 10 times in the first half, knocking down 9 of them. He also had the biggest offensive rebound of the game, as he was able to pull in a missed Josh Oglesby 3 when Iowa was up 4 with 0:54 seconds left, forcing Illinois to foul and to put the game on ice. Gabe had a great game and it was made even better by the fact that Fran actually didn't pull him in the second half when the game was on the line.

Devyn Marble went scoreless in the first half going 0-4 from the field and not getting to the charity stripe. Fortunately, he was able to flip the switch (as he seems to be able to do so easily) in the second half, as he shot 5-8 from the floor and 6-8 from the line, on his way to a 17 point second half. He did turn the ball over 6 times in this one, but he also continued to prove why Kenpom has him at #47 in the nation in steal rate, as he was responsible for a team high 3 takeaways on the night. Actually, 10 of Illinois' 12 turnovers came on steals by the Hawkeyes.

As for Senor L'Orange, he showed off a variety of skills on the offensive side of the floor. He finished with 14 points on 6-11 shooting from the field and hit 2-3 free ones. 3 of his 6 makes came on dunks, while 1 came on a nice little turn around jump hook, and another came on an absolutely beautiful up and under move that got his defender in the air. In addition, White rounded out that performance with 6 rebounds, 2 assists, and 1 block. And he did all that in 24 minutes, which was 6 fewer minutes per game than he has averaged in Big Ten play so far.

Overall, I'm happy with this win. I think the fact that Iowa blew a gigantic lead kind of spoils the fact that they ended up winning by a margin very close to what they were projected to win by. My numbers projected an 8 point victory, as did Kenpom's. They won by 7. Not terrible at all. Considering how difficult it has been for Iowa to win at Illinois for the past couple of decades, I will more than happily take this win. It was also nice to see them show the resolve to pull out a tough win on the road. And, with the way the Big Ten is playing right now, I highly doubt this will be their last. 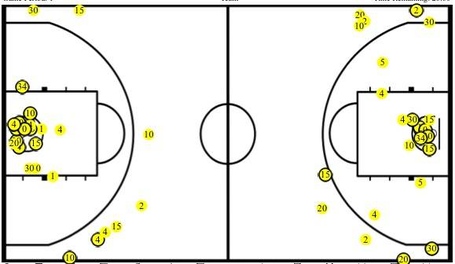 First half is on the left, second half is on the right. Made field goals are outlined in black, while misses have no outline. Also, no, Iowa did not attempt any shots from out of bounds. Doing this on my cell phone, the screen is tiny and my fingers are big.