Big Ten Basketball Championship Race: So You're Telling Me There's a Chance...

Iowa was on the outside looking in at a two-horse Big Ten race. And then Sunday happened.

Share All sharing options for: Big Ten Basketball Championship Race: So You're Telling Me There's a Chance...

Two huge results over the weekend threw the Big Ten basketball title race wide open. Wisconsin's win over Michigan and Michigan State's stunning home loss to Nebraska Sunday brought both frontrunners back to the pack and moved the teams otherwise fighting for a mere Big Ten tournament first round bye back into the picture. With each team having five or six games remaining on the schedule, where do we sit?

Michigan's earlier road losses to Indiana and Iowa were easily excusable, as most Big Ten road losses are. The Wolverines simply had a bad shooting performance in Assembly Hall and ran into a buzzsaw in Iowa City. Carry on, carry on.

The B1G Week Ahead 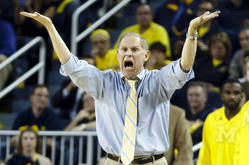 This week's full schedule is available at BHGP, your one-stop shop for Big Ten title race supplies and accessories.

The home loss against Wisconsin Sunday throws all of that into flux. Michigan shot just 20/50 from the field and 6/16 from behind the arc. The Wolverines were also uncharacteristically foul-happy: They sent Wisconsin to the free throw line 21 times despite being one of the nation's least foul-prone teams.

So much of Michigan's offensive efficiency comes from Nik Stauskas, who has faltered in recent weeks. Through January, Stauskas was averaging 18.4 points per game. In five February games, he's averaged just 10.1 points. More damning for the sophomore guard: He's scoring just 9.0 points per game in Michigan's last five losses.

If Stauskas emerges from his funk and kickstarts the Michigan offense again, they could well run the table. The Wolverines get a week off before Sunday's crucial home game against Michigan State, but then finish with four games against the bottom half of the conference. If they hold serve, they win the title. But with three losses in their last five and the shooting going south, that's far easier said than done.

When Michigan State's eleven-game win streak was snapped in a home loss to rival Michigan, it was explained as the inevitable byproduct of an injury-plagued team going up against one that was red hot from the field, and that is somewhat true. MSU has played much of the last month without its best post player (Adreian Payne) or its fourth-leading scorer (Branden Dawson), and one of the Spartans' top guards (Keith Appling) has missed three games, struggled to stay on the court in others, and might be done until the Big Ten Tournament:

And yet, with all that said, there's really no excuse for losing at home to Nebraska. Sunday's victory was Nebrasketball's second road win of the season (the other coming at Northwestern), and it's not as if the Huskers were blazing hot from the field (35.8 FG%). The killer stat: Michigan State has not won a game in regulation against a team in the Big Ten's current top seven. Sparty has overtime wins against OSU, Minnesota, and Iowa, and losses to Michigan, Wisconsin, and Nebraska.

That slate on the way to the clubhouse is not easy, either. Three games against the conference's top five teams, two of which are on the road? It's strange to say this about a team that's tied for first and coached by Tom Izzo, but Sparty's chances might have died Sunday.

Three Saturday home games and three midweek road trips are all that stands between Iowa and the Big Ten Tournament. Iowa is 70 percent to win or better in three of its next four games, but neither a visit from Wisconsin nor a trip to The Barn is ever easy. After a midseason hiccup, FU BO is rolling again, and even though McCaffery's teams have been particularly inhospitable to the Badgers, this is a dangerous team playing for its own claim to the Big Ten crown. As for the Gophers, Iowa dominated Minnesota at home last season but lost close in Dinkytown, and there's little to suggest that a similar fate is out of the picture.

Even if the Hawkeyes come out of that four-game stretch unscathed -- a more difficult proposition than it looks when you consider that Iowa is the only Big Ten team that hasn't lost to a squad in the bottom half of the current standings -- a road trip to East Lansing looms. Iowa hasn't won at Michigan State since the Franklin Pierce administration, and Sparty will be no more banged up than it was when it won in Iowa City on January 28. At the end of the day, the Hawkeyes are going to have to win that game if they want a share of the title, and even then will need some help from the Wolverines (and an assist from Sparty in the Crisler Center). The dual losses by Michigan and MSU Sunday gave Iowa some options, but they are a long way from choosing their own adventure.

Here comes the dangerous one. Wisconsin, which started the season with 16 straight wins and then imploded through late January, looks back to its old terrifying self. The Badgers just went on the road and pounded Michigan, but get an unfortunate week off before making another road trip to Iowa City. Until a four-point win at the Kohl Center earlier this year, Bo Ryan had never beaten McCaffery's Hawkeyes in regulation. They got over that hurdle, but their entire title claim will be predicated on beating those Hawkeyes again Saturday. A loss there and, cupcake schedule or no, Wisconsin is out.