Franalysis: Iowa's Talent Advantage Shines Through in the End

Penn State hung tough with Iowa for a good portion of the game, but Iowa's talent and depth proved to be too much in the end.

Share All sharing options for: Franalysis: Iowa's Talent Advantage Shines Through in the End

That was an interesting game, wasn't it? Iowa started quickly out of the gates, going up 11-4 on Penn State, but that initial burst quickly faded as the first half went on and Iowa slogged toward halftime. The Hawkeyes scored just 12 points in the final 10 minutes of the first half, thanks to a terrible shooting performance from everybody not named "Melsahn Basabe." Then, after neither team was really called for many fouls in the first half, the second half opened to a symphony of whistles; most of which were initially blown against the Hawkeyes. Eventually Iowa's main guys woke up, started hitting their shots and took control with about 13 minutes to go in the game, allowing the black and gold to outscore Penn State 40-26 the rest of the way.

A good chunk of this game may not have been prettiest basketball that we've seen Iowa play this year, but a road win is a road win. And this ended up being a double-digit road win! Yeah, I'll take it. 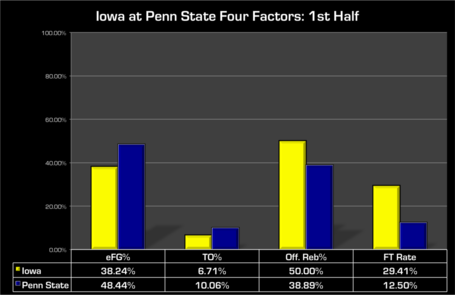 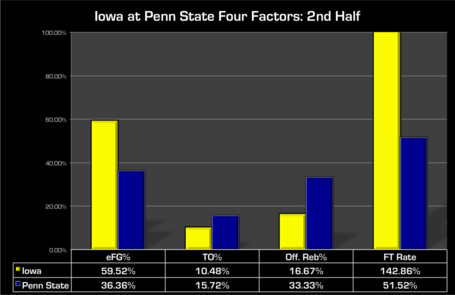 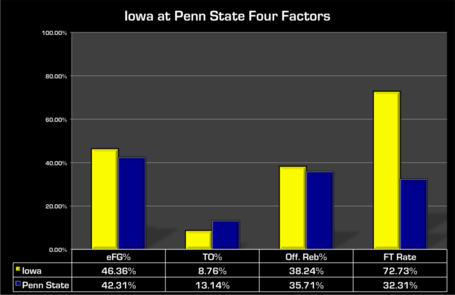 This game was a tale of two halves for Iowa, as they shot a miserable 38.24% in the first half and couldn't even connect much from the free throw line (5-10). Penn State, meanwhile, shot pretty average in the first half. Much of that had to do with the fact that they scored 22 points in the paint in the first 20 minutes. Penn State's ability to get to the rim (despite the fact that Iowa blocked 6 of their shots in that half) allowed them to take a 1.11 to 1.04 PPP lead (33-31 real score) into halftime.

The second half was a 180 degree twist for both teams in the shooting department. Iowa put up a 59.52% eFG% thanks to 5-10 shooting from three point range. Penn State, on the other hand, came away shooting 36.36% from the field in the final half of the game, bolstered by a 2-10 mark from downtown. Iowa's shooting was probably helped by the fact that they got to the free throw line 30 times (!) after halftime, as it only forced the Hawkeyes to take 21 field goal attempts compared to the 34 they had before halftime. Making 50% of their three pointers and taking 30 trips to the free throw line (with 26 makes!) allowed Iowa to win the PPP battle in the second half, 1.20 to 1.02.

Overall, Iowa's shooting performance in the second half, coupled with Penn State tanking from the field, gave Iowa the ultimate checkmark in this category.

In the first half, Iowa couldn't hit water from a boat on offense, but they managed to only be down by two points at halftime. How did they do that? Offensive rebounding. In the first half, Iowa had 22 misses and they were able to come up with 11 of them. (50%) And, though they only came away with 6 second chance points off of offensive rebounds, they were also able to extend those possessions by drawing fouls when they tried to put a shot back up.

Iowa's offensive rebounding dropped off after halftime, but it didn't really matter much. Even with Penn State being fairly consistent on the offensive boards in both halves, Iowa's extreme crashing of the offensive glass in the first half was enough to carry their low second half percentage to a win in this category.

We've talked about free throw rates being inflated at the end of games before, but this is a new level of inflated. In his effort to extend the game, Pat Chambers decided to intentionally foul Iowa on every possession from the under 3:00 minute mark until there were 0:55 seconds left in the game. In that two minute timespan, the Hawkeyes went 14-16 from the charity stripe. In the second half, Iowa went to the free throw line 30 times and made 26 of them. (!!!) Thanks to Chambers' hack-a-Hawk strategy, Iowa's free throw rate in the second half was an insane 142.86%. But even if we take those final 16 free throws out of the equation, Iowa would have still won the free throw rate battle 43.64% to 32.31%. 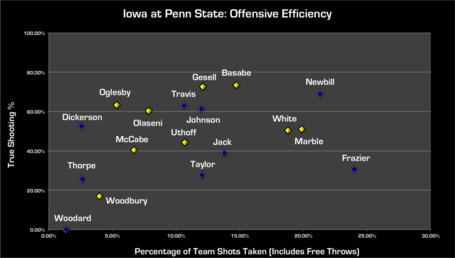 Melsahn Basabe had himself a nice game on Saturday. It wasn't anything fancy, as he didn't have any dunks or anything like that, but he battled down low all game long. Basabe put up 12 points and 2 blocks for the Hawkeyes in the first half, and while he only had 4 points after halftime, he grabbed 6 rebounds and swatted two more Nittany Kitty shots. He finished as the most efficient guy for Iowa, scoring 16 points on 11 shots. (Including free throws.)

Mike Gesell was huge for Iowa in the second half, as he... well, just look at his shot chart: 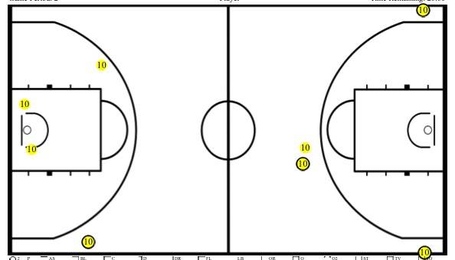 Iowa's point guard went 0-3 from two point range, but was able to connect on 4 of his 5 three point attempts. That includes him being responsible for 3 of Iowa's 5 makes from long range in the second half. I should also add that he dished out 7 assists and only had 2 turnovers. Another solid game for #10.

Iowa's main men, Devyn Marble and Aaron White, both started the game slow, but were able to pick up their play toward the end of the game. Marble scored 13 of his 15 points in the second half, and managed to salvage a rough 2-9 shooting performance by going 10-12 from the free throw line. White, meanwhile, had a very Aaron White type of game. Again, for evidence, let's take a look at his shot chart: 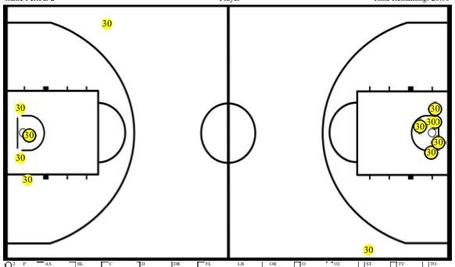 White did all of his damage in the paint, going 6-10 from close to the basket and missing both of his attempts from the outside. In fact, White was responsible for 12 of Iowa's 24 points in the paint and responsible for both of Iowa's dunks, including a nice alley-oop on a beautiful pass from Devyn Marble. Like Marble,White only had 2 points in the first half, but finished the game with 16 points and 7 rebounds.

Adam Woodbury was also very solid in his limited play against Penn State. He racked up 7 points on 7-8 free throw shooting and hauled in 4 rebounds in just 11 minutes on the court. And now a quick digression on the topic of Woodbury's athleticism.

Woody has taken a lot of crap in his first two years as a Hawkeye, considering we celebrate every one of his dunks like we're watching a rare meteorological event that we'll only see once in our lifetimes. Of course, some of that has been warranted, as he has gone through some growing pains learning to go up stronger with the ball when he is near the rim. One thing I don't think Woodbury can be knocked for, though, is his ability to run up and down the floor. I say this because I have seen this on Twitter recently in the last two games:

If Adam Woodbury beats you down the court I can only assume you're not trying.

I'm might be wrong, but Adam Woodbury isn't the most athletic player on Iowa's roster.

Both times this happened when Woodbury beat the Michigan and Penn State defenses down the court in transition, scoring easily on Michigan and earning a trip to the line against Penn State. Maybe opposing teams are falling into the trap of just thinking Woodbury isn't possibly athletic enough to get down the court before them, but Aaron White doesn't look like the athletic type either (he's said as much himself), and he's been beating his opponents down the court for three years now. Woodbury may not jump out of the gym like Dwight Howard, but he can run the court just fine, thank you very much.

And, finally, let's all take a moment to look at Tim Frazier's dot on the scatter plot. Iowa struggled to find an answer for D.J. Newbill, but Tim Frazier took 24% of Penn State's shots and came away with a 30.64% true shooting percentage on 4-17 shooting from the field and 2-2 shooting from the line. Frazier went 1-4 from three point land, so the fact that Iowa held him to 3-13 from inside the arc and only allowed him to get to the line for two free throw attempts should be considered a big victory for this defense.

In total, the first 30 minutes of this game may not have been the prettiest, but the end result was right around what was expected: Penn State played the Hawkeyes tough at home, but Iowa's talent and depth was able shine through in the end. It's a good win, and now it's time to go do the same thing in Bloomington. Go Hawks. 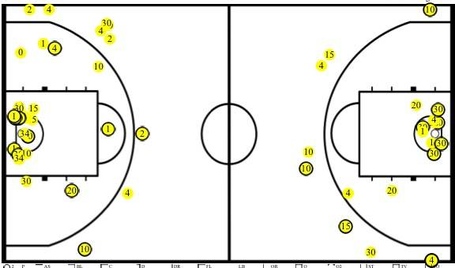