A stats and graphs look at the Iowa men's upcoming basketball game with the Penn State Nittany Lions.

Here's your statistical preview for the Penn State game. I recommend using it to supplement Pat's Franimal Planet preview, which will be up later. 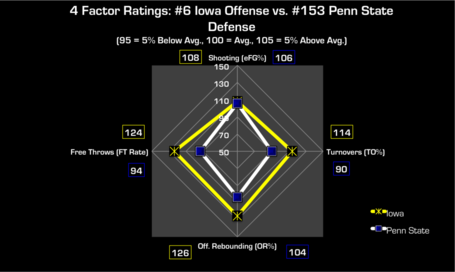 Penn State's defense is not great this year, but they are slightly above average with an adjusted defensive efficiency (DE+) at 1% above the national average. They pull that off by keeping their opponents from putting the ball in the hoop and not allowing them to collect their misses at pretty decent rates. However, Iowa has an adjusted offensive efficiency (OE+) that is 15% better than the Division I average this year, and has major advantages in three out of the four factors. Penn State may be able to battle Iowa to a draw in the shooting category, but the Hawkeyes should be able to get to the free throw line with little issue in this one.

When Penn State Has the Ball 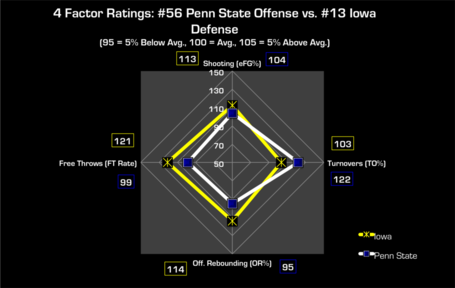 On offense, Penn State's OE+ so far this season is 7% above the national average, and they have done that mainly by not giving away possessions without at least getting a shot up. They don't necessarily shoot the ball lights out, but they are above average in shooting and their two best players, Tim Frazier and D.J. Newbill, can fill it up from anywhere on the court. Of course, Iowa's defense comes in rated almost as highly as their offense, with a DE+ that comes out to 13% above average. Iowa's main weakness (if you can call 3% above average "a weakness") is the fact that they are just slightly above average in forcing turnovers. So, don't expect Iowa to force a lot of them against this Penn State team. Other than that, though, Iowa should have a rather large advantage on defense. 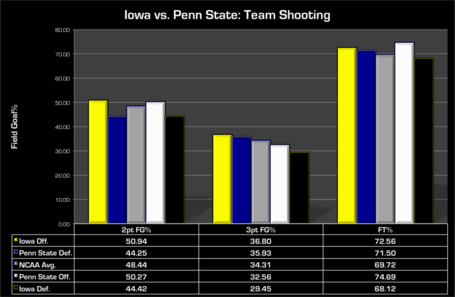 Iowa has out-shot Penn State from both inside and beyond the arc this season, but Penn State has hit their free throws at a better clip. As for defense, we can see that a big part of Penn State being above average in defensive eFG% in the first chart of this post is because they have been good at contesting their opponents' two point shots this year. Like Iowa's defense, this is because they've been pretty good at blocking shots this season. 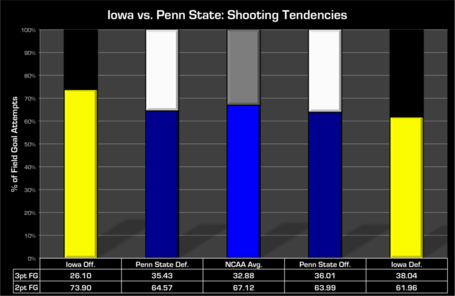 We already know that Iowa loves their transition game and prefers to score at the rim, while their opponents seem to really like shooting threes against them. Penn State, on the other hand, has an offense that likes to shoot the three ball about 3% more than average, and a defense that has opposing teams shooting them at basically the same rate. 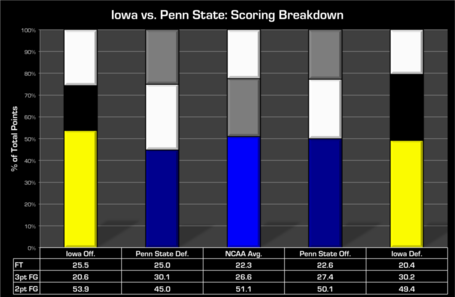 Because of their style of play, Iowa gets most of their points at the rim and at the free throw line. Penn State, on the other hand, has a pretty average offensive scoring profile, but gets about 1% more of their points than average from long range. On defense, their opponents get a greater than average amount of their points from threes because both teams' opponents shoot a greater than average number of three pointers against them. However, because Iowa's opponents have shot worse from three-point land this season, both teams are almost equal in the percentage of points they give up from downtown. Where they do differ is in the percentage of points given up from two-point range and the charity stripe.

Iowa is obviously the heavy favorite in this game, although I think we've all learned that a lot can happen on the road in the Big Ten this year. The worst case scenario for Iowa in this one is Frazier and Newbill going off against Iowa's defense coupled with Iowa shooting a mediocre percentage from the field, while having trouble getting the referees to blow the whistle on the road to get to the free throw line. If that scenario happens, Penn State could pull off the upset. More than likely, though, even if Iowa's defense has some trouble with Penn State's two main stars, the Nittany Lion defense should struggle to completely shut down Iowa's high octane offense. And in that case, I'll take Iowa's talent level and deep bench to come through with a win on the road.