Lost in the praise of Iowa's offensive performance against Michigan was the fact that they played some pretty good defense, too. Let's see how they defended Michigan's high-powered offense.

Since we have to wait until Saturday for another Iowa men's hoops game, I decided to spend some time going back and re-watching the Hawkeyes' glorious stomping of Michigan. In the recap of the game, I already mentioned how this was Iowa's best offensive output against Big Ten competition this year (1.34 points per possession), but I wanted to go back and praise Iowa for how well they played defense against a top-notch Michigan offense, too. Specifically, I wanted to look at how Iowa defended Michigan's ball screens. What follows is a look at five separate defensive possessions where Iowa defended Michigan's ball screens almost to perfection.

Our first scenario comes at the 15:35 mark in the first half. 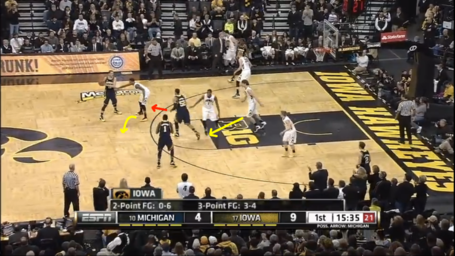 Nik Stauskas, defended by Devyn Marble, waits at the top of the arc for a Jordan Morgan high ball screen. 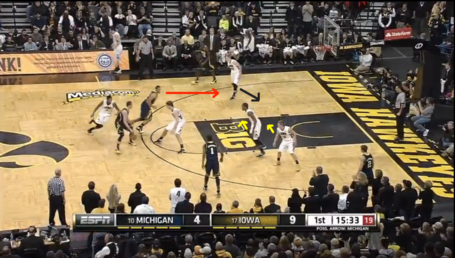 Marble goes over the top of the screen, while Adam Woodbury hedges out to take away the drive to the basket or an open three point attempt. Jordan Morgan rolls toward the basket, but Iowa plays great team defense and Basabe and Gesell take steps into the paint, allowing Woodbury plenty of time to recover down low. 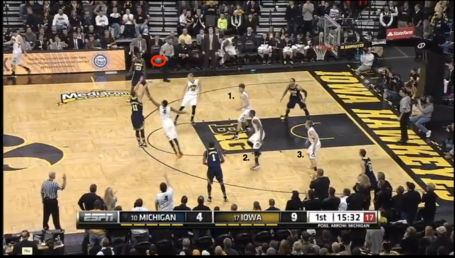 The result of Iowa playing together was a contested three point attempt by Nik Stauskas that missed the mark.

Play number two happens with 5 minutes left in the first half. 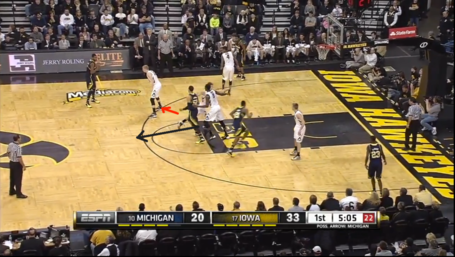 This time Glenn Robinson III has the ball in a similar spot to where Stauskas did in the previous play. Jordan Morgan again sets a high screen on the ball. 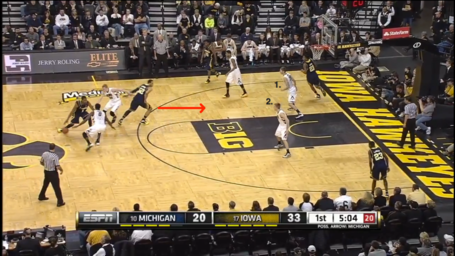 Aaron White goes over the top of the screen and Gabe Olaseni hedges very hard on the ball. Morgan again rolls to the rim, but, yet again, Iowa has two defenders waiting down low for him. 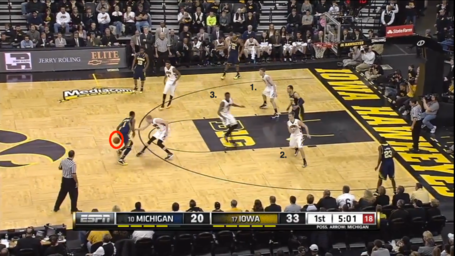 For our third defensive play, we move back to Mr. Stauskas. 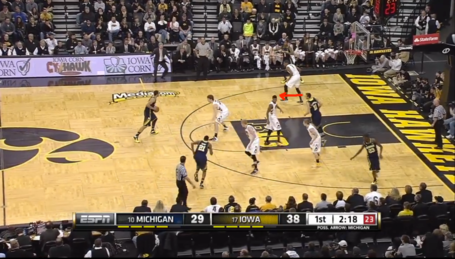 With just about 2 minutes left in the first half, Stauskas finds himself down low in the paint, with Jordan Morgan holding the ball at the top of the key. Obviously, Morgan is not a threat with the ball in his hands that far out, so Stauskas flashes to the ball. 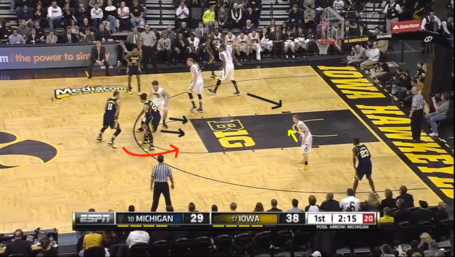 Once Stauskas receives the ball, Morgan immediately sets a high ball screen for him. Because this was so sudden, Woodbury found himself out of position to hedge on the ball. And with Marble caught on the screen, Stauskas is able to turn the corner and drive to the basket. However, Iowa again plays great help defense, with Mike Gesell stepping into the paint and Melsahn Basabe crashing down, as well. What made this play even better, though, was the fact that Adam Woodbury takes a great angle to the hoop and is able to recover on the ball-handler. 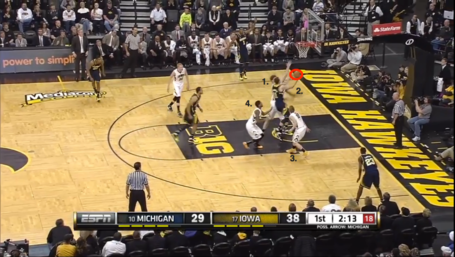 As you can see, Iowa surrounds Stauskas with four defenders and Woodbury comes up with the rejection that is rebounded by Basabe.

The next defensive possession isn't quite as successful as the other three have been, but I think it should have been. 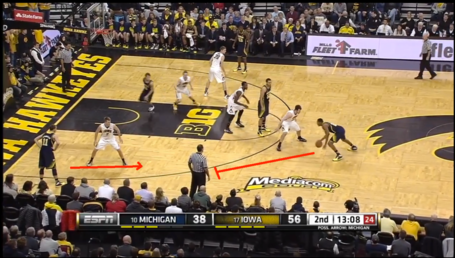 With 13:08 left in the game, Nik Stauskas flashes high from the corner, as Zak Irvin dribbles down and delivers the pass to Stauskas. After Irvin gives Stauskas the ball, he immediately sets a down screen on Josh Oglesby, who was guarding the Canadian sharpshooter. 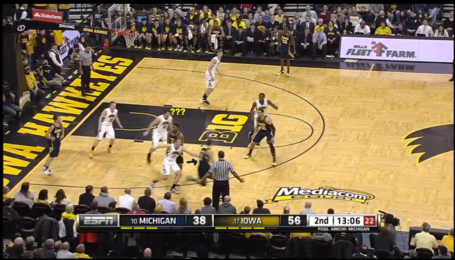 This was not great help defense by Zach McCabe who doesn't even attempt to help Oglesby on Stauskas. And, despite having no help underneath, Oglesby does a great job of fighting over the top of the screen. Michigan actually had a double screen set up, as Jordan Morgan awaited Josh Oglesby after he got past the Irvin screen, but Stauskas must have thought he lost Oglesby with the first screen and decided to shoot the three. 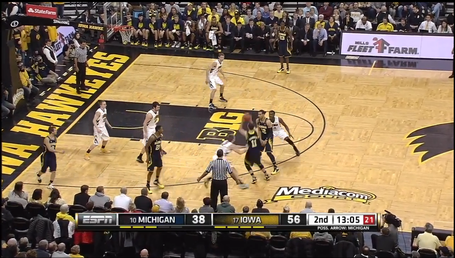 Now, Oglesby was called for a foul on this play. And I guess here is where the refs saw contact. But this was a pretty weak call to me. Oglesby never held onto Stauskas' jersey, and he never really pushed him either. Oglesby looked to make weak contact, and I think the only reason this got called was because of who Stauskas is. 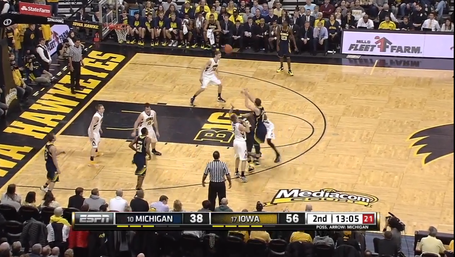 I mean, I don't really see a foul here. Instead, I see Josh Oglesby hustling through a screen and finding a way to contest a three point shot. Normally, coaches aren't fans of fouling three point shooters, but if I'm Fran, I applaud the hustle of Josh Oglesby on this play.

Finally, the last defensive possession happens at the 11:37 mark in the second half. 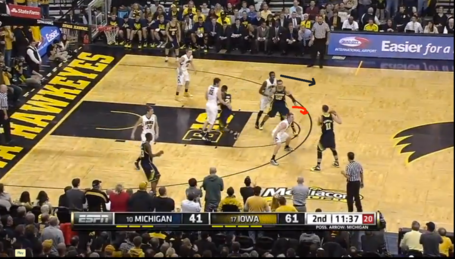 Stauskas again has the ball at the top of the arc, and Jordan Morgan again prepares to set a high ball screen. 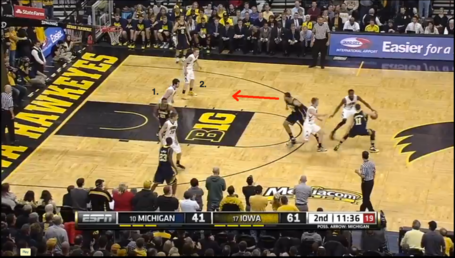 Olaseni again hedges hard, cutting Stauskas off and allowing Oglesby plenty of time to get through the screen. 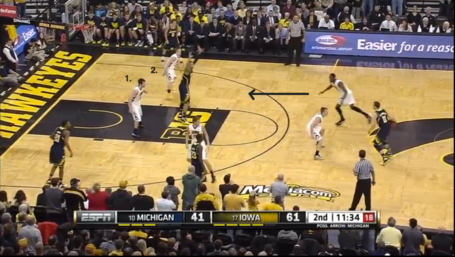 Jordan Morgan does the usual roll to the hoop, but Zach McCabe and Mike Gesell are both shading toward the rim, giving Olaseni enough time to be able to recover on Morgan. Meanwhile, Josh Oglesby is straight up on Stauskas in a one-on-one situation. 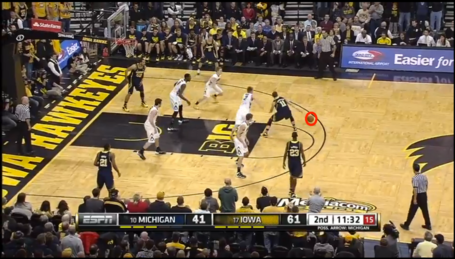 Stauskas attempts to break Oglesby down off the dribble, but loses his handle. Oglesby dives on the loose ball, calls a timeout and gets himself a steal.

There were more examples I could have picked out from this game, but I figured 17 pictures was enough to get the point across. The point being, Iowa put on one of their best offensive performances of the season on Saturday, but don't underestimate how well the defense played, either. They held a Michigan offense that averages 1.21 PPP (Kenpom adjusted) to just 1.06. And, actually, that's a bit misleading, as Michigan was able to score 7 points within the last 1:15 when Iowa emptied their bench, making the game deceptively closer than it really was. (If an 18 point blowout can be described in such a fashion.)  Iowa really held Michigan to 0.95 PPP in the first half, and that trend held up through basically 39 minutes of game time, as the Wolverines were still at 0.99 PPP when Max Biefeldt (Beilein started to empty his bench, too) hit a three pointer.

Basically, this was complete and utter domination on the both sides of the ball by the Hawkeyes. The offensive output was not all that surprising, considering Michigan's defense is good, but not great. The defensive shutdown, however, surpassed expectations against an offense that is usually prone to torching nets. Instead, the Wolverines were the ones who got torched in this one. Iowa frustrated them from the tipoff, and they did that by disrupting their screen game for 40 (really 39) minutes.