Franalysis: Iowa Lets Victory Slip Away in Second Half

The first half wasn't pretty, but after halftime was a damn mess.

Share All sharing options for: Franalysis: Iowa Lets Victory Slip Away in Second Half

Well, that was frustrating. 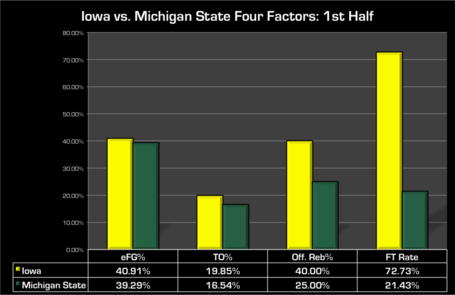 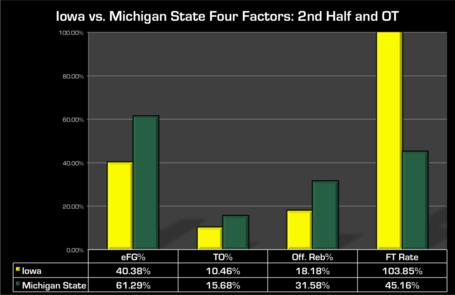 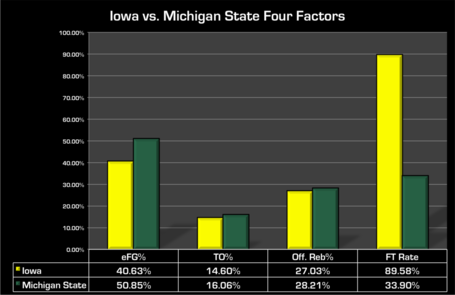 The first half was not pretty by any means, but holy hell, was it prettier than the second half and overtime for Iowa.

Against Northwestern, I didn't see the need to post four factor charts for each half. This game, though, woof. Look at the difference in shooting performance for Michigan State between the first half compared to the second half and overtime. For a reference point, the 39.29% eFG% Michigan State put up in the first half would be inferior to the worst shooting Division I basketball team this season, while their second half and overtime performance of 61.29% would be superior to the best shooting team in Division I this season. That increase in shooting prowess increased Michigan State's points per possession from 0.86 in the first half to 1.18 in the second half and overtime. After halftime, Iowa allowed the Spartans to go 8-10 from two point range and 6-16 from three point range. The second half conversion rate on twos for Sparty was downright terrible from an Iowa perspective, and even Michigan State's three point field goal percentage (which, was pretty much their season average) was still well above Iowa's season average allowed.

Which brings me to a quick aside. Iowa, under Fran, is always going to be vulnerable to teams who are able to knock down threes at a decent clip against them. Why? Because:

If you look inside the red oval, you will see the percentage of field goal attempts by Fran McCaffery-coached teams that were from beyond the arc. There has been only one year since 2005 in which one of Fran's teams finished better than 235th in the country in three pointers attempted. This isn't a knock on Fran. Clearly, he's been very successful with the system that he has in place. However, this game was a good example of the vulnerability of his team's to three point shooting. It's great and all that Iowa is able to get to the free throw line better than most teams in America, but their attack the rim and draw contact strategy only works well when they are able to defend the perimeter. That was an issue against Michigan State.

As for how Iowa shot ball themselves, ummm... not particularly well. The Hawkeyes were pretty terrible from the floor all throughout the game. Their ability to get to the line helped offset this problem, but it still wasn't enough to overcome them finishing the game 1-13 from the floor after Zach McCabe hit a three pointer with 9:56 left in the second half. Advantage: Michigan State

There really isn't much to say about this category. Michigan State came into this game not turning the ball over a whole lot, and that's what happened. As for Iowa, while not turning the ball over too much in the first half, they were able to do so even less in the second half and overtime. This helped them win the turnover battle, overall. Too bad it didn't really affect the outcome of this game, though. Advantage: Iowa

Michigan State came into this game in the middle of the pack in offensive rebounding and were even missing their best offensive rebounder in Branden Dawson. So, with Adreian Payne out, it was pretty rational to think that Iowa should be able to win the rebounding battle. Yeah, well, the hell with rationality.The first half went pretty much according to plan, with Iowa pulling down 45% of their own misses and limiting Michigan State to only 25% of theirs. The second half, though, Iowa came away with a paltry 18.18% of available offensive boards. And while the 31.58% offensive rebounding rate that Iowa gave up in the second half was pretty much the Division I average, it was still worse than their season average, and enough to tilt this category just in the Spartans favor. Advantage: Michigan State

As you can tell by the charts, Iowa won this category pretty handily. In the second half and overtime, the Hawkeyes actually had more free throw attempts (27) than they did field goal attempts (26). And while we may complain that they left too many points on the court by not hitting their free throws, if they would have hit their season average free throw percentage, they would have only been expected to score one more point, still leaving them a point short of Michigan State's 71. In other words, blame the defense and the terrible shooting performance from the field for this loss. Advantage: Iowa

Overall: Iowa Won 2 out of 4 the Factors (Unfortunately, Michigan State won the one that matters most) 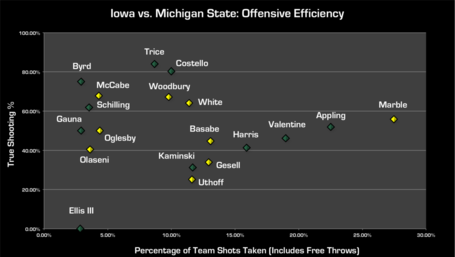 As you can tell by the chart, Devyn Marble attempted to put the team on his back, offensively. Although he had an ill-advised, forced three point attempt when Iowa was down three with a minute left in overtime, he did his best to will this team to a win with 21 points, 5 rebounds, and 2 blocks. His 0.57 points per minute was easily the best on the team in this one. Only Adam Woodbury came even remotely close with 0.50. (9 points and 4 rebounds in 18 minutes) Some nice rules of thumb for points per minute (at least for me) are: anything over 0.50 is great, anything over 0.40 is good, anything over 0.30 is average, and anything under 0.30 is not real good.

With that being said, I should probably mention that nobody else on the team had a higher points per minute than 0.29 in this game. That includes Aaron White, who, while putting up 10 points and 7 rebounds, wasn't able to be the second scorer that Iowa needed when the rest of the team (outside of Marble) seemed to struggle to get going.

Meanwhile, Mike Gesell went 1-6 from the field, Jarrod Uthoff went 2-7, and Melsahn Basabe went 3-8. I'm glad Uthoff was more aggressive in this game than he was in some of his more recent games, but out of these three and White (who went 1-4 from the field), somebody has to step up and help out Marble in terms of offensive production against top tier teams like Michigan State.

In the end, I'm not sure what to think about this game. Iowa was the favorite at home against a banged-up Spartan team. However, Michigan State continues to play extremely tough, despite the many injuries they have faced this season. And I really want to chalk this loss up to an off night by Iowa. This is why I like numbers because I feel like they keep me from having too irrational of feelings when it comes to the teams I care about. And, after this game, Iowa only fell from #4 in the country to #6 by my numbers. (Coincidentally, Kenpom's too.) Anyway, after this game, my numbers still have Iowa favored in all of their remaining games except for when they travel to East Lansing in March: 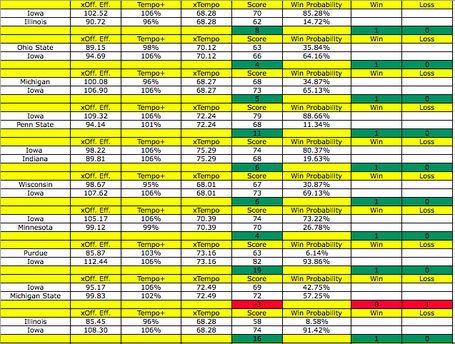 So, as much as this loss hurts, it's done and over with. Now, it's time to move on and get a win in Champaign on Saturday. 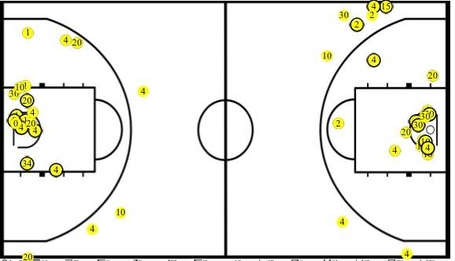 First half is on the left, second half on the right. Made field goals are outlined in black, while missed field goals have no outline.