Where did Iowa fall in the rankings after losing to Michigan last week?

The Hawkeyes soared to poll heights that hadn't been seen in Iowa City in years last week, ascending to 10th in the nation.  Alas, they've fallen from those lofty heights this week after losing to Michigan last Wednesday in Ann Arbor. Iowa still remains ranked fairly highly, though, and has a great opportunity to reclaim a spot in the top 10 next week if they can win this week's big game with Michigan State (Tuesday night, 6 PM CST, ESPN).

Iowa falls from 10th to 15th in the AP Poll, which is only the third steepest-drop in those rankings this week (tied with Villanova and Wisconsin, who also fell five spots in the poll).  Ohio State dropped seven spots in the AP Poll, from 17th to 24th, although their freefall was arrested by a 62-55 win over Illinois over the weekend.  UMass fell even further, dropping eight spots (13th to 21st) after losing to Richmond, 58-55.

Iowa's fall was less pronounced in the Coaches Poll, dipping just two spots, from 10th to 12th.  Interestingly, Iowa remains ahead of Michigan in that poll, despite having the same number of losses and having just lost fairly convincingly to the Wolverines (who followed that up by beating a top-10 team on the road -- not too shabby).  Perhaps the coaches are just avid KenPom subscribers.

Through Sunday's games, Iowa sits at 4th in the most recent KenPom rankings: 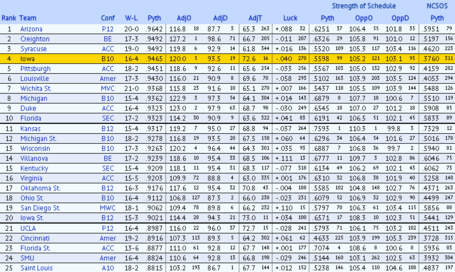 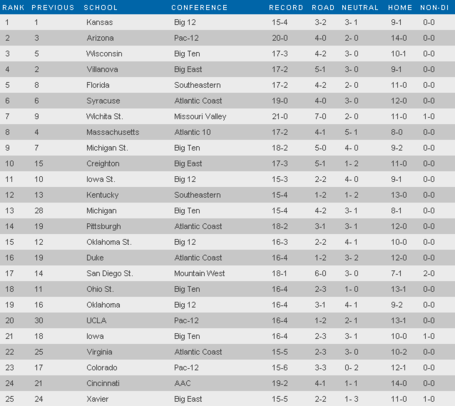 As Iowa fans know all too well, guady KenPom rankings are nice, but what truly matters on Selection Sunday is where you sit in the RPI, however flawed a system it might be.  Iowa's been on the wrong side of the RPI bubble in recent years, but they're in much better shape this year, sitting at 21st in the most recent official NCAA RPI rankings.  Of course, while Iowa's RPI is such that they're in no danger of not making the tournament as things stand, it would still be very nice to keep that number ticking up, so that Iowa can hopefully get a more favorable seeding.

Also, in terms of Iowa's records versus certain groups within the RPI rankings...