The Hawkeyes came out of Evanston winners in basically every statistical category.

Share All sharing options for: Franalysis: Iowa Takes Care of Business in Evanston

ED. NOTE: Say hello to our newest writer at BHGP, TitoHawk.  You might remember him from his days at High Porch Picnic or on Twitter, where we can be found at @TitoHwk.  Give him a follow, won't you?  He's going to be assisting us with our basketball coverage, particularly from a stats 'n' graphs standpoint.  -- Ross

Note: Hello there. I have been asked to write for BHGP about basketball from a numbers perspective. So, here I am.

This game was never really competitive. Iowa looked like the better team from the tip, but only held a 6 point lead at halftime thanks to a turnover habit they found difficult to shake. Thankfully, the team kicked the turnover bug in the second half and, really, just dominated every facet of the game the rest of the way, outscoring the Wildcats by 20 in the second half on the way to a 26 point road win. Huzzah. 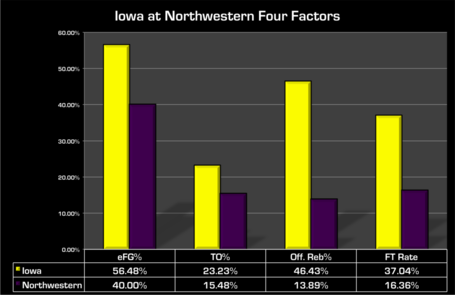 Northwestern was able to slow the tempo down from Iowa's average of about 72 possessions per game. However, it really didn't matter, as Fran's squad did whatever they liked when they weren't giving the ball away.

Iowa shot the ball well throughout the game. They finished the first half with a 53.57% effective field goal percentage (eFG%) and came out hot in the second half to the tune of 59.62%. Northwestern, meanwhile, was their usual self when it came to putting the ball in the cylinder, which is a nicer way of saying they did not excel in this category. They finished the game with a 40% eFG%. Advantage: Iowa

Holding on to the ball was difficult for Iowa in the first half. According to the official box score, Iowa had 9 turnovers in the first half. (ESPN said 10 at the end of the first half and they also differed for offensive rebounds. I'm not sure what was going on with that.) This amounted to a 29.6% turnover rate at the halftime break. Considering Iowa averaged a turnover on 16% of their possessions coming into the game, that was a little out of character. And, it's not like Northwestern has been good at creating turnovers this year; they were forcing a turnover on only 16% of their opponent's possessions this year, as well.

As for Northwestern, they do one thing well on offense, and that's hold onto the ball. In the first half, they only turned the ball over on 9.86% of their possessions. In the second half, Iowa was able to up that to 20.31% of their possessions. In general, the second half wasn't particularly kind to the Wildcats, but they still won the overall turnover battle. Advantage: Northwestern (thanks to the first half)

Unlike turnovers, this is one area where Iowa was consistently good throughout the game. Iowa's length showed from the get go, allowing them to grab 46% of their misses in both the first and second half. In the first half, Iowa also crashed the defensive glass, allowing Northwestern to only pull down 20% of their own misses. Somehow, in the second half, the Hawkeyes improved upon that already stellar number, leaving the Wildcats to collect just 6.25% of their misses. Advantage Iowa

So far, through Big Ten play, Iowa leads the conference in getting to the line, and it's not really close. With a 54.8% free throw rate (free throw attempts divided by field goal attempts), they are the only team in the conference over 50%, and Minnesota is bringing up a distant second place at 42.1%. The Hawkeyes are only one of four teams over 40% since Big Ten play tipped.

Northwestern, meanwhile, was their usual non-free throw shooting self in both halves. Advantage: Iowa

Overall: Iowa Won 3 out of the 4 Factors 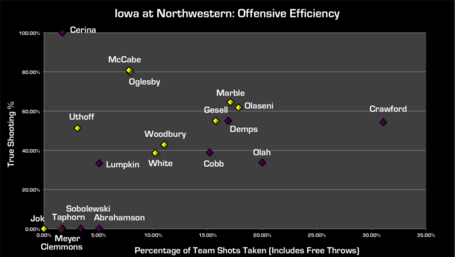 Note: I should explain how to read this chart. I borrowed this idea a while ago from Jeff Haley at Burnt Orange Nation. The horizontal access describes the percentage of the team's shots that a player is responsible for. "Shots" in this sense means a player's field goal attempts and free throw attempts. (Free throws are multiplied by 0.475.) The vertical axis is true shooting percentage, which is another fancy field goal percentage statistic. Where effective field goal percentage properly weights three pointers, true shooting percentage also adds free throw shooting. That would be why Marble is so high on the chart despite shooting 3-8 from the floor vs. Northwestern. Going 7-7 on your free throws helps. Basically, the further right a player, the more shots they took, and the higher the player on the chart, the better they shot.

Iowa's offense was pretty balanced today, as Aaron White never really got going and it took Devyn Marble until the second half to even get on the board. (Though Marble did end up scoring 14 points in the second half.) Instead, Gabe Olaseni was the offensive star, putting on a dominating performance today with a double-double of 14 points and 10 rebounds. Mike Gesell had a nice day too with 11 points and 6 assists, while Josh Oglesby went 2-3 from three point range and had a nice drive and finish in the lane. And, last but not least, Melsahn Basabe, who isn't pictured on the chart because he had a true shooting percentage of 101.27% (yes, that's possible when you hit all your shots and free throws), put on a nice show with 8 points, 4 rebounds, and 1 block in only 15 minutes of play.

White and Woodbury scored 5 and 6 points, respectively, but only shot 5-13 from the floor combined. Considering most of their shots came down low, that isn't real great percentage converted. Uthoff, meanwhile, made his only shot attempt (though he missed both of his free throws), but continues to have what used to be labeled "Josh Oglesby syndrome" meaning that he continues to be too passive on offense. Since Big Ten play started, his percentage of team shots has dropped to 7.32% from 10.32% and his usage rate (a measure of personal possessions used by a player while on the court) has dropped from 20.76% to 17.20%. Basically, he's just not shooting the ball as much as he was before conference play began. As a result, his points per game have dropped in Big Ten play to 6 from 10.85 and his points per minute have dropped to 0.33 from 0.52. He's still only in his first full season of playing Big Ten basketball, so an adjustment was to be expected. Here's to hoping that Uthoff's talent can make the learning curve less steep and we see some improvement as the season goes on.

In total, Northwestern wasn't supposed to be a major test, but the fact that Iowa went on the road and blew them out by 26 points was nice to see when they were only favored by about 10 points in Vegas. It's a good win, but nothing to get too excited about. Instead, the bigger test rolls into Iowa City Tuesday night. If the Hawkeyes want to win a Big Ten title, they need to make sure they protect their home court. 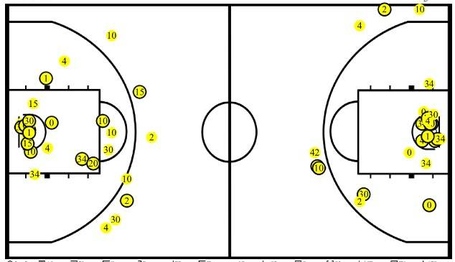 I've been messing around with trying to chart Iowa's shots for each game using an app on my phone. So far it seems to work well enough. Made field goals are outlined in black, while misses are the circles which have no outline. I don't know how often I will be able to do it (it's not as easy as it would seem), but when I do, I'll be sure to post it.