The 2013-14 college basketball season is a little over tow months away [insert scream of delight], but we still didn't know exactly who Iowa would be playing or what sequence they would be playing them in.  Today the Big Ten released the full conference schedule for 2013-14, and Iowa duly followed suit and released their own schedule.  Let's take a look, shall we? 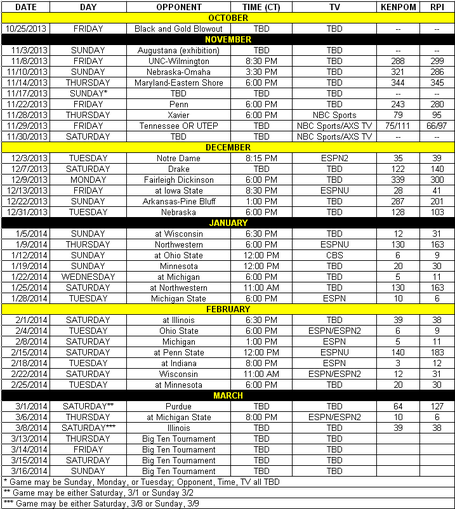 As you can see, there's still a few details to fill in -- we don't know exactly who Iowa will be playing on November 17/18/19 (SPOILER ALERT: It probably won't be a team you care about.), nor do we know whether Iowa's two March home games (against Purdue and Illinois) will be on Saturday or Sunday of their respective weekends.  And there's still a lot of game-time and TV information to fill in (although you won't go far wrong by assuming most of the games currently listed as TBD will end up on BTN).  But we have a much better idea of Iowa's 2013-14 schedule now, so huzzah!

The first thing that jumps out: holy crap, that's a lot of nationally-televised games.  (And by "nationally-televised" I mean games which are widely and easily accessible to folks on the most basic cable packages -- in this case, CBS, ESPN, and ESPN2.  BTN and ESPNU aren't quite as readily available.)  Iowa is slated to have 8 games on CBS/ESPN/ESPN2... which is a lot, especially for an Iowa program that's been in the hoopyball hinterlands of late.  The last time Iowa appeared on CBS/ESPN/ESPN2 that many times was the 2005-06 season, when they made 10 appearances on ESPN/ESPN2.  This is great for several reasons.  One, it means Iowa games should be more easily accessible this year for Iowa fans.  Two, it gives Iowa more visibility nationally, which is good for recruiting.  Three, it's a tangible sign of the program's progress under Fran.

For instance, take the CBS game; in today's media landscape, with viewership so fractured, being on CBS versus ESPN isn't quite the coup in terms of visibility and exposure that it would have been in the past.  But the Big Ten's games on CBS are status symbols: while ESPN is contractually obligated to air every team in the Big Ten at least once, CBS gets to pick and choose -- and they pretty much always choose good games between good teams (because, surprise, Jim Nantz and Clark Kellogg aren't going to Lincoln to cover Nebrasketball versus Northwestern).  Getting the CBS stamp of approval is a clear sign that Your Program is Good.  How do we know this?  Because Iowa hasn't had a game on CBS since 2007. 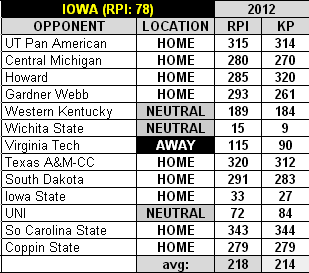 And here's Iowa's non-conference schedule this year, with KenPom and RPI rankings from last season: 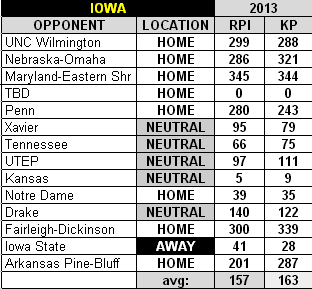 NOTE: Obviously TBD will be replaced with a real team.  Iowa will also only play Tennessee OR UTEP (not both).  And there's no guarantee that they'll play Kansas in the B4A final (or that Iowa will make the B4A final), obviously.

Part of the non-conference schedule is somewhat out of Iowa's control; the Big Ten and ACC (with input from ESPN) set the Big Ten-ACC Challenge matchups, while Iowa State is an annual opponent, and Drake/UNI will be playing Iowa every year so long as the Big 4 Classic exists.  Take out those teams and the Battle 4 Atlantis tournament and this is who Iowa went out and scheduled:

Look, I understand the financial reality of scheduling -- it's not like I was expecting to see Iowa's non-con schedule filled with home-and-aways against teams like Gonzaga, Stanford, Maryland, Florida, Georgetown, etc.  That's not realistic.  I get that.  And that's fine.  But I thought we would at least trade the really rancid teams for teams that suck in a slightly more respectable fashion.  My hope was that we might use Minnesota's schedule from last year as a model for our own. 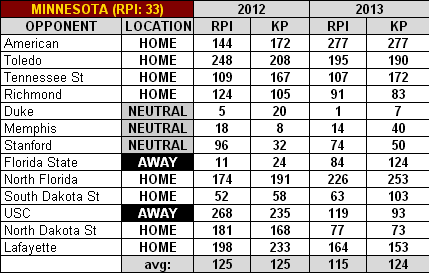 Notice something?  Minnesota scheduled ZERO teams that had RPIs of 280 or worse in 2011-12.  Of course, you can't predict how a team will do in the year you play them (American did them no favors last year), but for the most part, if you schedule a team that was really, really bad the year before, there's a pretty decent chance that they're going to be really, really bad this year, too.  If you schedule a team that was bad but not embarrassingly so (say, in the 200s of RPI), they're probably not going to hurt you too much.  The problem with playing the really bad teams is that they can be anvils on your RPI, something Iowa found out to our chagrin last year.  And, frankly, they don't do much for a team from a competitive standpoint, either.

The good news is that even with some of those dog teams on Iowa's schedule this year, RPI shouldn't be the bouncer crushing Iowa's hopes of hitting March Madness dance floor this year.  As I said above, Iowa's non-conference schedule really is improved; there's a realistic possibility that Iowa will play five RPI Top 80 teams this year (versus the one they played last year), which is huge.  The other thing that will help Iowa in terms of RPI?  The Big Ten schedule.  Just with Michigan, Michigan State, and Ohio State all flipping from single-plays to double-plays on Iowa's schedule, Iowa will play three additional games against RPI Top 10 opponents.  In all, Iowa's 2013-14 Big Ten schedule has 13 games against teams in last year's RPI Top 40 -- that's a lot of quality games.  Obviously some of those teams won't be as good this year (I'd earmark Illinois and Minnesota for some regression), but in general, Iowa's conference schedule should make the RPI folks very happy.

Maryland-Eastern Shore is so goddamn bad.  Like, worst/second-worst team in the entire nation bad.  They were 2-26 last year.  2-26!  Unless Fran owes someone a favor, I have no idea why this Iowa team is playing a team that terrible.  On the bright side, if you like watching Darius Stokes and the two Kyles (Denning and Meyer), this could be the game for you.  Assuming you get video.BTN.com, that is, because BTN proper isn't touching that game with a 10-foot pole.  Anyway.  The early part of the schedule sets up for a lot of blowout wins.  The end of the month sees Iowa heading to the Bahamas for the Battle 4 Atlantis tournament; the teams they face there will be by far the best teams they will have at that point -- hopefully they're ready for the uptick in competition.  And fingers crossed that the TBD for the 11/30 game gets replaced by Kansas and the Fightin' Wigginses.

December is the back-half of Iowa's non-conference schedule, which is a mix of ugh (Fairleigh Dickinson) and intrigue (Notre Dame, Iowa State).  Iowa also gets to ring in the New Year with a visit from Nebrasketball -- yay? That's Iowa's one and only game against the Huskers this season as well.  Also, between Nebraska and Nebraska-Omaha, Iowa is hitting two-thirds of the Nebraska Trinity -- if they could find a way to work Creighton in here, too, they could hit all of it.

Yeah, this is when shit starts getting real.  Iowa's first three road games: at Wisconsin, at Ohio State, at Michigan.  GULP.  The good news is that they're balanced out by home games against Northwestern and Minnesota (and Nebraska, including the 12/31 game).  Wisconsin, Ohio State, and Michigan figure to be very tough road games, but hopefully Iowa can manage to win one of them -- for this team to be as good as we think/hope they can/will be, they need to win more than just the games they "should" win.

February sees the schedule reverse a bit, with Ohio State, Michigan, and Wisconsin all visiting Iowa City.  Hopefully we are rude hosts and send them home with losses.  February also has a few of Iowa's more winnable-seeming road games, although Penn State and Minnesota will probably be feisty on their home floors.  (I would include Illinois in that group, too, but Assembly Hall has been such a house of horrors for Iowa over the years that I just assume that game will be an extraordinarily dfficult game for Iowa, regardless of how good either team is.)  Iowa's lone game with Indiana is also this month.  Tom Crean and his butt-cut won't be making a trip to Iowa City this winter.

Finally, Iowa wraps up the season with a trio of games, two very winnable home games sandwiched around a late season trip to East Lansing to take on the Spartans.  How great would it be if the Big Ten title was on the line (for both teams) in that game?

I think this team can definitely get to around 22-23 wins in the regular season: 11-12 wins in the non-conference slate and 11-12 wins in Big Ten play.  The trickiest non-conference games look like the final two games in the Battle 4 Atlantis tournament (especially if those are against Tennessee and Kansas) and the games against Notre Dame and Iowa State.  There are several challenging games in B1G play, but if Iowa can defend their home court and poach a few on the road, 11-12 wins in the league seems doable.  Is that enough to win a regular season title?  Probably not. Contending for a Big Ten title would be fantastic, but this team may not be to that level yet.  The goal I would definitely like to see them attain is a bye in the Big Ten Tournament, though -- that's a top-4 finish in the league, which would be pretty impressive.  Iowa hasn't had a bye in the Big Ten Tournament since (you guessed it) 2005-06.

So what do you think?  How many wins do you see for Iowa?  What games are you most excited about?  What do you like about the schedule?  What do you dislike?  How big is the winning margin going to be in that Maryland-Eastern Shore game?