Face front, true believers: the Hawks are taking on the X-Men at the Battle 4 Atlantis tournament.

The field for the preseason Battle 4 Atlantis tournament was released several weeks ago and while we were excited about seeing Iowa play in a tournament with teams like Kansas, Xavier, Villanova, and Tennessee, we didn't yet know what the bracket would look like for the event. Until now. 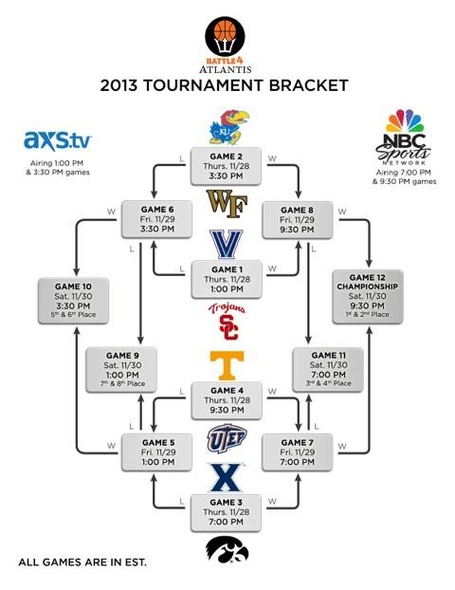 Yes, that bracket also doubles as a flowchart. That's what happens when you guarantee all teams three games in the competition and play to determine 7th and 8th place finishers.

If Iowa beats the winner of the Tennessee-UTEP game, they would be in the championship game at 8:30pm CST on Saturday, November 30th. They'll face the team that emerges from the other half of the Battle 4 Atlantis bracket, which includes Wake Forest, Villanova, USC, and Kansas. It would be a pretty big shock if The Fightin' Andrew Wigginses Jayhawks didn't represent that half of the bracket in the title game, but we'll have to wait and see.

The Battle 4 Atlantis tournament is certainly the highest-profile preseason tournament that Iowa hoops has participated in for several years, as well as the most competitive one Iowa's been in for quite some time. It should be an excellent early season test for an Iowa team that will enter the season with higher expectations than any Iowa team since the 2005-06 team and, if nothing else, it will be an excellent boost to Iowa's RPI (Xavier, Tennessee, UTEP, and Kansas were all RPI Top 100 teams last year, per RealTimeRPI).

Incidentally, Thanksgiving weekend should be one of the busiest weekends of the year for Hawkeye sports, between the Battle 4 Atlantis tournament, the football game with Nebraska, and the wrestling team's early-season Iowa City Duals event (which may be a bit more competitive than it's been in the past; rumor has it that UNI could be one of the teams in this year's field). BHGP will have you fully covered that weekend and we'll have much more on the Battle 4 Atlantis tournament as it draws nearer.