Iowa Hoops to Battle for Atlantis

Share All sharing options for: Iowa Hoops to Battle for Atlantis

I was in the midst of working on a piece about Iowa's non-conference scheduling and, lo and behold, a key piece of new information about next year's hoopyball non-conference schedule dropped: Iowa's trading one A-named pre-season tournament (the Great Alaska Shootout) for another A-named pre-season tournament (the Battle 4 Atlantis).

(NOTE: Neither Iowa nor the Battle 4 Atlantis organizers have announced this yet, but Goodman is very clued-in, so if he's saying it's a go, we feel comfortable running with it. -- ed. NOTE 2: And now it's official. -- ed.)

For the sake of reference, here's the 2013 Great Alaska Shootout field, including their final 2012-13 RPI and KenPom numbers: 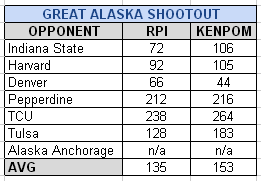 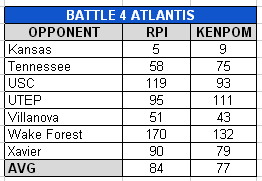 Meanwhile, in case you've forgotten, this was the 2012 Cancun Challenge field: 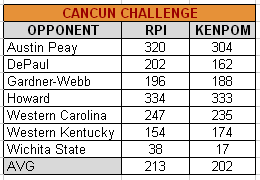 The Great Alaska Shootout was a step-up from the Cancun Challenge -- it lacked sexy names, but it had some very solid teams like Indiana State, Denver, and Harvard -- but the Battle 4 Atlantis tournament is a sizable improvement on both tournaments. Mind you, the Battle 4 Atlantis field features only slightly more 2013 NCAA Tournament teams than the Great Alaska Shootout (it has two, Kansas and Villanova to the GAS' one, Harvard), but the overall depth of the field is far superior. Iowa will be guaranteed three games against some combination of the teams listed above, depending on their results in the tournament, but any combination will be a boost to Iowa's RPI. A middling RPI (weighted down in part by Iowa's cupcake-heavy non-conference schedule) was a key factor in Iowa being shut out of the 2013 NCAA Tournament, but participating in a field like this should be a very nice boost for Iowa's RPI next year. (And, yes, RPI is still dumb, but so long as it remains a key factor in the NCAA Tournament Selection Committee's decision-making process, it's important to know how to work it to your advantage.)

This development also looks like yet another example of McCaffery backing up his words with clear actions. Fran has maintained since the early days of his tenure that he would set the non-conference schedule accordingly, based on what he deemed to be best for the team he had available. When that was a team that was still deep in the rebuilding process (see: the last few years), that meant a schedule heavy on Hostess products, even if fans grumbled (and the Selection Committee turned up its nose). But now that he has an Iowa team with more experience (and talent), he seems to be adjusting the difficulty of the non-conference schedule accordingly. A better team begets better opposition.

The 2013 Battle 4 Atlantis tournament will be held on November 28-30 on Paradise Island in the Bahamas. It certainly looks lovely there. TV information is TBA; I think last year's final was aired on the NBC Sports Network.