Iowa ran into a motivated team with three NBA-level players, and the result was not pretty 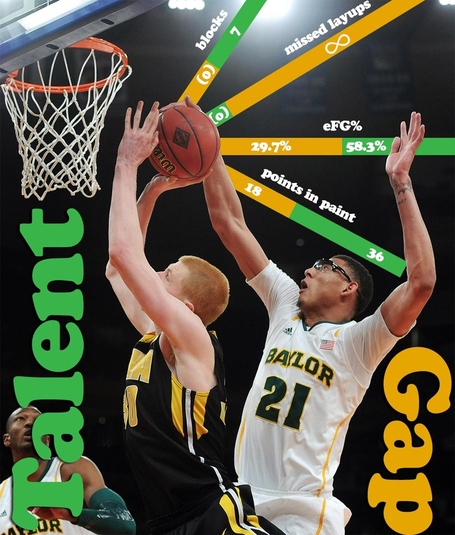 The nice thing about staying alive in a tournament is that you get to keep playing; the bad thing is that the longer you keep playing, the more likely it becomes that you will find your match (sort of a Peter principle for basketball). Iowa met a team that was better than them last night, and got a totally just, comprehensively deserved butt-kicking. The Hawks didn't play a particularly sharp game, but their play wasn't the story last night: the story was the Baylor Bears.

Specifically, how did the Baylor Bears not make the NCAA tournament? How, indeed, did they not go deep into the NCAA tournament? The Bears feature the #15, #80 and #93 prospects on DraftExpress.com's top 100 list for this year's NBA draft in Isaiah Austin, Cory Jefferson and Pierre Jackson (not to mention a feisty defensive two guard in A.J. Walton and a bruising backup PF in Rico Gathers). Just to get an idea of how talented the Bears are, the only Big Ten teams that have three players on the top 100 of that draft list are Michigan and Michigan State. Indiana, Ohio State, and Minnesota all have two, and Illinois has one.

Iowa, needless to say, has zero.

I see that Baylor had a mediocre 18-14 record, that they had bad losses to College of Charleston, Northwestern (!?) and Texas, that they lost to Iowa State twice, and that they had a pretty mediocre defense (87th in the country per KenPom)... and it just doesn't compute. They were bigger, faster and more skilled than Iowa at four out of five positions last night, and it didn't feel close. Austin and Jefferson, in particular, owned the paint on both ends of the court like some latter day Dale Davis/Antonio Davis duo, intimidating Iowa on defense and combining for 14-18 shooting and 38 points on offense. And Iowa is not a small team (for college)! Or bad at defense!

Of all the teams Iowa played this year, Baylor most resembled Michigan State. They had the same twin tower lineup, with the same combination of a tremendously strong player (Jefferson/Nix) and a tremendously quick and long-armed player (Austin/Payne). The Bears were weaker at the two and three than the Spartans, but Jackson looked much stronger than Keith Appling, and Gathers was more impressive than anyone coming off Tom Izzo's bench. How this team didn't leverage all that talent into a tourney bid is a mystery.

You can point to things Iowa did wrong: they missed open jump shots – shots that were going down against Virginia and Maryland – and played far too carelessly with the ball in the first half (Anthony Clemmons had two very bad in the first half, as did Aaron White and Devyn Marble); they missed so, so many layups (most glaringly a point-blank miss by Adam Woodbury) and made silly mistakes, like Gabe Olaseni not guarding the rim on an out-of-bounds play (Austin promptly threw it down on him) or Melsahn Basabe guessing that Austin would give up the ball and hedging high while Austin dribbled leisurely to the rim. All that happened, and it wasn't pretty, but ...

It didn't really matter. All the things Iowa did poorly they did poorly because Baylor made them do so. The turnovers were the result of the tight defense Walton and Jackson applied to Iowa's guards; the missed layups were due to Iowa's constant, justifiable fear that Austin might be lurking somewhere within a five foot radius of the ball. And the majority of the turnovers came in the first half, when Iowa kept the game somewhat close. By the end of the game, the Bears had only one fewer turnover, but turned on the jets

The simple fact was that Iowa sent out some nice, talented college players, and Baylor sent out some future NBA players. Apparently Baylor hasn't been focused or motivated for much of the year, but they were last night, and the result was pretty much what you would expect from an encounter between focused, motivated pro players and a team like Iowa.

With that said, some players deserve a lot of credit for continuing to fight as the game got away from the Hawkeyes. Mike Gesell, in particular, displayed a facility for getting his shot off over much taller defenders and finished with a very efficient 13 points on six shots. Maybe Baylor didn't quite expect the little white guy to be so skilled, but Gesell has a good awareness of how to manipulate space and timing to get off quality shots even when you wouldn't expect him to. Eric May also played extremely hard in his last game as a Hawkeye, throwing his body all over the court in an effort to get deflections. Aaron White had a couple bad turnovers, but was still Iowa's best interior player, grabbing six rebounds and drawing several fouls against much bigger competition. And as bad as Anthony Clemmons' two turnovers were, I think he still deserves a lot of credit for making two threes and giving Iowa 17 minutes at the point that they desperately needed. With Gesell limited by injury and Marble out with foul trouble, Clemmons was the only one left, and he did did ... okay, not great, both on offense and defense. He needs work as a point guard, but the potential is there. His three-point shot, in particular, has been very encouraging, and he has good size and speed. His defense is good enough that if he can become merely adequate as a starting point guard, he'll be a very valuable player for Iowa.

That's a wrap for this team, which made a lot of progress over the year and really came close to maximizing their level of talent, especially on defense. I'll write a more comprehensive overview later, but as bad as this loss was, the team still has to feel pretty optimistic about next year. Baylor exposed some important weaknesses – weak point guard play and the lack of NBA-level speed and athleticism – but at least one of those should improve over the summer, and as for the other, Iowa is still a very young team and still has room to grow, which is exciting.