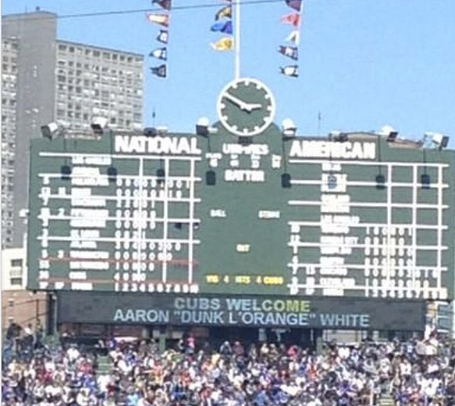 Aaron White took in a Cubs game yesterday. Someone in the Cubs media office was kind enough to welcome Mr. White to the Friendly Confines with a message on the scoreboard, a message that happened to feature a certain BHGP-spawned nickname. White took a pic of the message and sent it out via Twitter, along with the following message:

So apparently Aaron White hasn't seen the light on the awesomeness of "Dunk L'Orange" as a nickname – he's tweeted in the past that he thinks of himself as a strawberry blonde, not a redhead, so that's not too surprising – but apparently someone in the Cubs organization is a Friend of the Pants.

This is one of the greatest triumphs in BHGP history. A throwaway joke has become a nickname has become a meme has become an actual Wrigley Field message has become a thing that Aaron White has publicly proclaimed ambivalence toward. This didn't just go viral, it went SCOREBOARD. To whoever is the anonymous BHGP aficionado responsible for that message, thank you! It made our collective day here.