Devyn Marble had such a good game that we thought the only way to honor him was with a cheesy 90s-style poster. 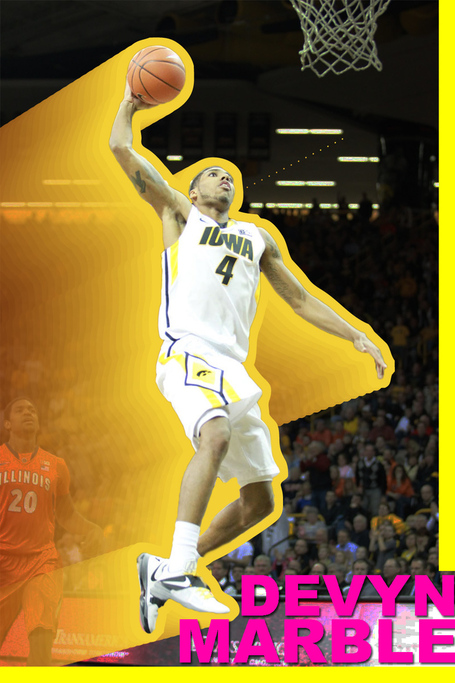 There was a lot to like offensively in this game, especially Devyn Marble schooling folks and Josh Oglesby calmly draining two threes in the second half, but the star for Iowa, once again, was their defense. Despite the offense providing an eFG% of just 43.5% and .94 points per possession, the defense made it work, holding Illinois to even lower numbers: an eFG% of 35.7 and .82 points per possession. The Hawks recognized that Illinois likes to shoot threes, and apart from a few head-scratching forays into zone, managed to keep a close track of Brandon Paul, D.J. Richardson, Tracy Abrams and the rest. The Illini made nine threes, which is a lot, but also took 29, so on a per-shot basis, the three-point defense was pretty good (.93 points per shot).

But the two-point defense? Ridiculous. Iowa held Illinois to 9 of 34 shooting on twos (26.5%), or .53 points per shot, and blocked 12 (!) shots. The credit goes all around: to the guards, especially Eric May, for chasing Paul and his cohorts around the three-point line, to Adam Woodbury and Zach McCabe, for holding down the defensive glass, and to Aaron White, for his typically versatile two block, three steal day. But the revelation of the game was Olaseni. On multiple occasions, Illinois guards beat Iowa's tight perimeter defense and made their way to the paint, only to meet Olaseni. His presence allowed Iowa to cover the three-point line as closely as they wanted, and he made a huge difference on defense while he was in the game. He looked so good, in fact, he really deserves a nickname. So here are a few proposals:

Thoughts? Other suggestions? Olaseni is still a work in progress, but that's almost more encouraging -- he still has room to get better. Illinois was pretty much the ideal match-up for him: they have no real post-up players (he really struggled against Cody Zeller, by contrast), they don't have a lot of weight inside, and so the one-on-one demands on him were pretty limited. If he can get a little stronger and nail down the finer points of one-on-one post defense, he could be a very special defensive player.
But back to the game. Devyn Marble had maybe his best game of the seasons (or second best next to the UNI game). He scored in a variety of ways, had a couple of sweet dunks, and broke down the Illini defense for a crucial and-one late in the second half to push the lead to 11. He also had six rebounds, four assists, a steal and made all ten of his free throws. Iowa really struggled to score most of the game, and it's hard to imagine them getting to 60 points without Marble on the court. Not only did he score himself, but he was one of the few players that was able to break down Illinois trapping defense and their zone.
And Oglesby deserves credit for having the confidence to take those threes late in the game. He had a pretty miserable first half, going 1-5 and looking in general like he didn't want the ball in his hands, but he shot without hesitation on those crucial threes and effectively sealed the game. It's always going to be a nerve-racking experience watching him shoot, but it's important to remember that a 33% shooting game for Oglesby is functionally equivalent to a 50% shooting game for, say, Melsahn Basabe.
With this win, Iowa moves up to 31st in the country in KenPom's ratings and 35th in Sagarin's, but their RPI remains stubbornly low at 86th. Selection committee chair Mike Bobinski recently said that he "personally" uses the more advanced rankings (like KenPom and Sagarin) "fairly extensively", so that's a ray of hope for Iowa, but if recent history is a guide, their RPI is just too low for them to merit consideration.
Stray observations: