Hawkeyes face Indiana State in the NIT first round Wednesday.

The Iowa Hawkeyes received a #3 seed in Sunday's NIT draw, and will face Indiana State out of the Missouri Valley Conference at Carver Hawkeye Arena Wednesday night at 6:00. ESPN2 will be handling television coverage.

Earlier in the day, Iowa had been mentioned as one of the five final teams in the NCAA field, but the NIT selection committee clearly did not agree. The #3 seed takes on special importance, as the NIT games are generally played at the lower-seeded team's facility. A #2 seed is guaranteed two home games barring a loss; a #3 seed would need an upset to get an additional home game. 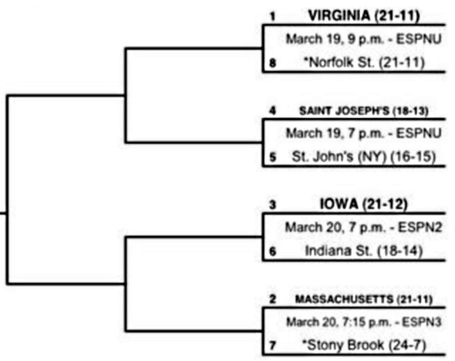 Iowa is drawn into a bracket headed by top seed Virginia, with #2 seed UMass on Iowa's side of the bracket. The Minutemen face Stony Brook for a spot in the second round, but Iowa is looking at a trip to Amherst next week should they win. St. John's and St. Joseph's face off in the #4/#5 matchup in the Virginia bracket. The full bracket is available here.

Current season ticket holders can order tickets for Wednesday night's game immediately, according to the University Athletic Ticket Office. Tickets will go on sale to the general public at 1 p.m. CT Monday. Tickets are $15 for adults, $5 for UI students and fans under 18 years old.