Northwestern dared Iowa to make a million easy shots, and Iowa nearly obliged them by missing 600,000. 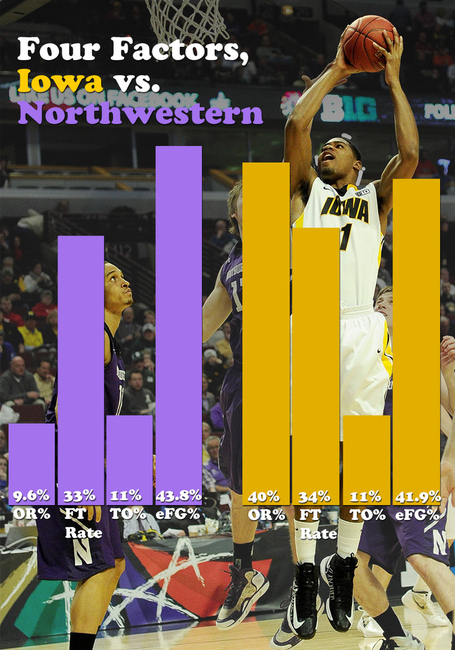 After a half of getting shredded on defense, Northwestern changed tacks and decided to offer Iowa the following Mephistophelean bargain: "We'll let you take as many six-foot jump shots as you want, BUT you can ONLY take six-foot jump shots." Iowa accepted the bargain, then proceeded to clank about ten short jumpers at the rim.* It was a smart gambit by a team with a defense as foamy and insubstantial as some sort of purple meringue, and it helped the Wildcats to cut into Iowa's lead and make the end of the game scarier than it ought to have been. Iowa managed to fend Northwestern off, thanks to some clutch shooting by Devyn Marble and Mike Gesell and the continuing domination of the paint by Melsahn Basabe, but it would have been nice if the Hawks could have put the Wildcats away earlier and gotten some rest.

* As a side note, Northwestern actually had some solid science on their side in allowing those short jumpers. Kirk Goldsberry of ESPN has used visual tracking data from the NBA to determine the efficiency of shots from various areas of the court (in terms of points per shot), and produced this interesting chart for the league for 2011-12. If you click on the chart, you'll see that three-pointers and layups are both highly efficient shots, but that as soon as you get a few feet beyond layup range, all shots are just about equally inefficient. In other words, players shoot just about as poorly from six feet as they do from 18 feet. Which makes sense, really. It's an awkward shot that players don't practice much, and you never know if someone is behind you trying to block it, so it's often rushed. Plus it's only worth two points.

In an odd way, Northwestern played defense in the second half in the same way that Iowa football has for so many years: they stayed in zone the whole time, gave Iowa short, easy shots, over and over, and dared them to execute consistently. It made for a grueling, boring game, which worked in Northwestern's favor, but thankfully it was not enough. The zone, plus Northwestern's decision to go with a four-guard lineup of Hearn, Sobolewski, Demps and Marcotullio, meant that Iowa's big men were allowed to feast on the boards: the Hawks pulled down a ridiculous 40% of the available offensive rebounds and 90% of the available defensive rebounds. No one thrived more than Basabe, who had five offensive rebounds of his own, to go along with seven defensive rebounds and five blocks.

The small ball-all zone gambit was a smart ploy by Bill Carmody, but it indicated the desperation of a team willing to try anything -- including rampant flopping (Sobolewski), hooking Aaron White's elbow and yanking it the wrong way (a very dangerous play, by Marcotullio), and bear-hugging a man on the fast break (Hearn on Marble). This may have been Carmody's last game as a coach, so I can understand his players were eager to do whatever it took to win a game and keep his career alive, but it was ugly nonetheless.

So Iowa moves on to face Michigan State at 8 pm tonight. The Spartans will offer considerably stiffer resistance than the Wildcats, especially for the big men. Adam Woodbury and Melsahn Basabe will have to contend with mismatches in speed and size respectively in Adreian Payne and Derrick Nix, and the Hawks will also have to match the size and athleticism of Garry Harris and Branden Dawson on the perimeter. Not to mention Keith Appling. Look for Eric May and Anthony Clemmons to get some serious burn as defensive stoppers. The only thing I would put in Iowa's favor is depth. Michigan State has five really good players who play a lot, and then it drops off pretty dramatically. If the Hawks can get Nix and Payne in foul trouble, and then make some jump shots, they might have a chance.