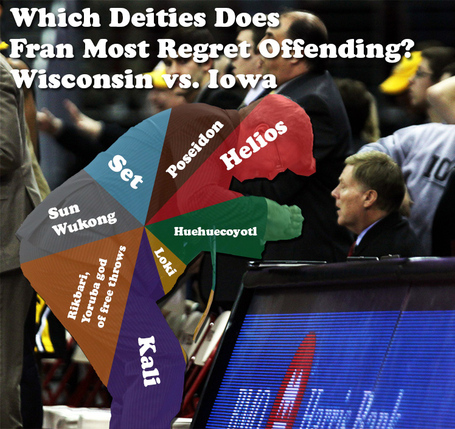 It's not clear yet whether this Hawkeye basketball team is an authentic sports collective or merely part of a vast psychology experiment designed to test the capacity of Iowans to endure mental pain and anguish. It would have been easier, and more expected, really, for Iowa to lose by 15 points last night. And at a certain point, that seemed likely. Wisconsin jumped out to an 11 point lead with six minutes left in the first half, and it seemed like the game could easily get out of hand. But true to form, Iowa hung on like grim death and clawed their way back into the game, which set them up for an ending that was all the more heartbreaking.

But let's put that to the side for the moment and focus on what was remarkable and good about this game for Iowa: the defense. Iowa went into a very hostile environment and held a good offensive team to an effective field goal percentage of below 40%, .94 points per possession, and just 27 points in the second half. They held the Badgers without a point for five straight minutes in the first half and three straight minutes in second half three times. You can fault their offense all you want, but their defense was nearly perfect all night. They denied Ben Brust any air space all game, kept Jared Berggren and Ryan Evans out of the paint, had a better offensive and defensive rebounding percentage, and generally had impeccable spacing and rotation. If their offense had provided any kind of a lift, they would have won in a rout.

Unfortunately, Iowa's offense is barely functional. Wisconsin played great defense of their own, especially Berggren, and Iowa didn't have any one player who could fight through the physical defense and generate quality shots on his own. Devyn Marble is looking more and more like a liability on offense (this was his sixth game on the year with sub-20% field goal shooting), and without his shot-creation, Iowa's possessions become a blur of dribble handoffs, contested shots, and prayers. If the team is not going to the line, not making free throws or not grabbing garbage points off the offensive glass, it's hard to say where the points will come from.

It's important to remember just how weird it is that Iowa is staying in games where they habitually shoot under 40% from the field. That is not normal. Usually when a team shoots that poorly, they lose, and badly. But Iowa's defense has been so damned good that they've managed to overcome the offense and get the Hawks just close enough to lose in maximally painful fashion. In a way, this team is a lot like the Iowa football teams of the 2007-2009 era. Those teams were littered with future NFL defensive players and routinely finished in the top 20 (or top 10) in most defensive categories, but because the offenses were so mediocre, the pressure on the defense to be absolutely perfect was immense. In the same way that the football team sometimes needed the defense to do the absurd and hold the opposition to six points or something, this basketball team needs the defense to do the miraculous every game and hold the opposition to sub 40% shooting and .9 points per possession to win. The fact that the defense is nearly pulling the trick off is pretty remarkable in and of itself.

I don't want to focus too much on the last moments, both because it was very painful and because there's not much to say beyond "we have some terrible luck." Fran pulled a very crafty move on the final possession, surprising Wisconsin with a zone and baiting Berggren into taking a midrange jump-shot. It caught the Badgers off guard and led to an ugly shot that fell short and caromed through the hands of three Hawkeyes on the way out of bounds. If the ball had bounced just a little differently, if Iowa had gotten their hands on that shot, the game probably would have been over. Unfortunately, Wisconsin got another shot, and that meant one more chance for Iowa's luck to turn sour. Traevon Jackson's three-pointer hit the front of the rim squarely, bounced straight up and then fell down. When Josh Oglesby got his own look from three to win the game, naturally the ball rolled around the rim twice and then fell out. What can you say? Iowa played the final possessions pretty well, but the vagaries of fate pushed the ball in on one end and out on the other. Once the game went to overtime, it felt like the Hawks had just run out of gas.