What happens when a lackluster effort by Iowa is matched by inspired play by the Nebraska starters? An invitation to the NIT. 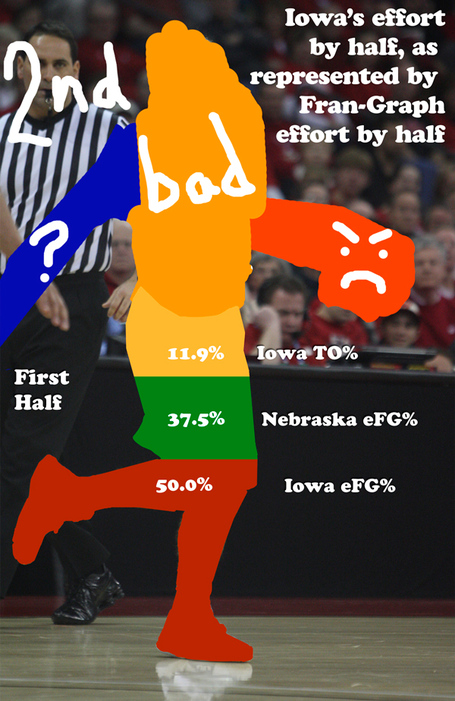 One thing that has helped me deal with the disappointment of tough sports losses is recognizing that teams usually get the result they deserve. And boy, did Iowa deserve to lose against Nebraska. After a very solid first half, they played one of their sloppiest, most lethargic halves of the year, allowing the Cornhuskers to shoot a blistering 68.5% effective field goal percentage while shooting a miserable 30% eFG% themselves and frittering away a lead that had grown to 19 points at its height. In the second half, Nebraska's starters played harder, shot better, defended more ferociously, all despite not getting a second of rest. Iowa's players, on the other hand, looked like they had just woken up from a long nap.

This loss didn't come from one big mistake, but rather a series of about forty small errors that cumulatively served to erode Iowa's lead and put Nebraska back in the game. There was the time Melsahn Basabe brought his man directly into the path of an Aaron White drive, leading to a charge; or the time Zach McCabe let a guard slip around his trap, exposing the entire defense and leading to a wide-open three; or the time Mike Gesell over-pressured at the half court and allowed his man to catch a pass behind him; or the various times Basabe, Marble and White let passes slip through their hands as they went up for what should have been layups. Iowa missed out on probably ten second half points because of fumbled or outright missed layups, which is indicative of the carelessness that made this loss a reality.

Nebraska, meanwhile, played great. They seemed to realize that if they probed at Iowa's zone for a little bit -- if they set up a pick and roll up high, or dribbled into it, then faked they were coming out, then dribbled back in -- they could open up space in the middle. Iowa has been admirably disciplined all year about denying clean looks from the three-point line, but Nebraska took what Iowa was giving them, namely space at the free throw line and on the baselines, and managed to convert a series of contested midrange shots. Dylan Talley had 16 points in the second half, continually beating Mike Gesell with his size and patience, Brandon Ubel scored eight crucial points on some very difficult short hooks, and Shavon Shields kept beating whatever big man was forced to mark him with his speed.

Their defense was also very solid. David Rivers didn't do much on offense, but made several crucial energy plays that turned potential Iowa scores or stops into Nebraska points: he blocked a Gesell layup (arguably fouling him, but we'll leave that to the side), triggering a fast break and leading to a Talley jumper on the other end, he stole the ball from Zach McCabe, leading to a foul and free throws for Nebraska, and he got an offensive rebound and put-back that cut the lead to ten. He played with all the energy Iowa lacked.

The point is, Nebraska did just as much to win this game as Iowa did to lose it. They played well. Iowa shot poorly because Nebraska made it hard to shoot. They shot well because they ran their offense crisply and because they made tough shots. They deserve a lot of credit for playing a dominant second half with zero rest.

With that said, Iowa did make their share of mistakes. The most crucial one came in their defense of Talley. Gesell got the assignment much of the time, but if there's a type of player that Gesell has shown himself incapable of defending, it's a big guard. Talley is 6'5", 216 pounds, and he used his five-inch, 30 pounds advantage on Gesell to get a variety of clean looks at the basket. He was tall enough to shoot over Gesell if he sagged off, but fast enough to get by him if Gesell applied too much pressure. The winning three that Talley made was a perfect example of the problem Gesell faced guarding him. He sagged off, afraid of letting him by him into the paint, but then didn't have the height or reach to recover when Talley pulled up for a three. The biggest question I had was why Gesell had that assignment at all. It was a bad mismatch, and Devyn Marble or Eric May or even Aaron White would have been better on him. For a few possessions down the stretch, Marble was switched onto Talley (incidentally both possessions led to missed shots), and he was assigned to him on Nebraska's crucial second-to-last possession, but after Iowa trapped Talley and forced him to call a time out, Gesell got the assignment again. I heard Fran McCaffery say after the game that they wanted to force a long jump shot and not help, but putting Gesell on Talley meant that the shot was not disrupted in the slightest. It was a long shot, to be sure, but it was an open shot.

Beyond that one mistake, Iowa just played a very sloppy, non-composed game. In fact, they were probably lucky to be in the game at all with less than a minute left. They needed quite a few tough jump shots, including Aaron White's tying three, to go in to get there. Nebraska is far from a terrible team, especially at home, but Iowa played a second half as if they thought they were, and that wasn't good enough.

A note on the tournament and RPI:

So that's probably it for Iowa's NCAA tournament chances, barring an upset at Indiana and a lengthy Big Ten tournament run. Their RPI is .548, 90th in the country right now, and that's not nearly good enough to make the tournament. If they had won against Nebraska, that number would have moved up to around .570, which would be good enough for around 70th in the country and would put them just on the edge of the range where teams make the tournament. If you plot RPI against seed # for at-large teams that made the NCAA tournament in the past ten years (2003-2012), here's what you'll see (I did this research as part of a separate post that I'm working on): 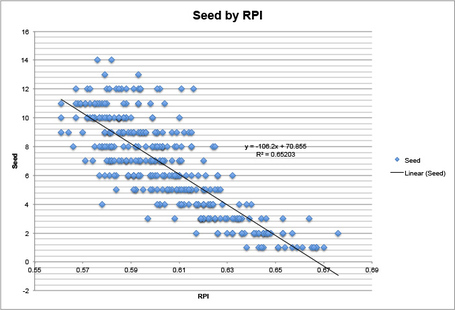 You can see the clear relationship between RPI and seed: as RPI increases, the seed improves, pretty linearly. Also, you can see that the cut-off line for RPI in the tournament is about .56, and only three teams in ten years have gotten a seed with an RPI that low. To comfortably make the tournament, it looks like an RPI number of around .57 or .58 is needed. Iowa was edging toward that number, but now things look quite a bit bleaker. RPI Forecast now has Iowa finishing with an RPI of .5471, which is well below the .56 line that the tournament committee seems to use. Maybe if they beat Indiana on the road, won all their other regular season games, and two games in the Big Ten tournament, they would have a shot, but they're on the way outside looking in.

Which is another reminder of how important it is for Iowa to schedule a tougher non-conference slate of opponents. Iowa's non-conference strength of schedule is currently rated 340th in the country out of 347 teams according to Ken Pomeroy. Only five major conference teams have weaker schedules. Iowa rates very highly in the more sophisticated ratings systems -- 37th in Ken Pomeroy's ratings, 41st in Jeff Sagarin's -- but the NCAA selection committee is attached to the RPI, and the RPI gives teams a disproportionate amount of credit for playing a selection of good opponents, regardless of whether they win or lose and regardless of the margin of victory. Iowa played very, very few good teams in the non-conference (they played very few mediocre or even merely bad teams, too -- they really scraped the bottom of the barrel) and it's coming back to bite them now.

For comparison's sake, a team like Nebraska, which ranks 138th in KenPom's ratings, is only seven spots behind Iowa in the RPI at #97 right now. In the eyes of the NCAA selection committee, Iowa and Nebraska are roughly similar teams, even though Nebraska has a losing record, and the reason is that Nebraska played a very good non-conference schedule. They played the following teams by RPI range:

Iowa, by contrast, played the following lovely schedule:
Five teams from the bottom fifty teams by RPI in the country! No wonder Iowa looks like a mediocre team according to the RPI. Nebraska did a good job of not only scheduling genuinely tough games, but also "tough" easy games: Kent State instead of Coppin State, for example, or Southern instead of South Carolina State. Nebraska isn't going to be making the tournament this year, but they played the RPI game well enough that a slightly better record would have put them in the conversation. Whoever is doing Iowa's schedule, on the other hand, looks like he almost went out of his way to make Iowa's road to the tournament as difficult as possible.