What a difference a zone makes 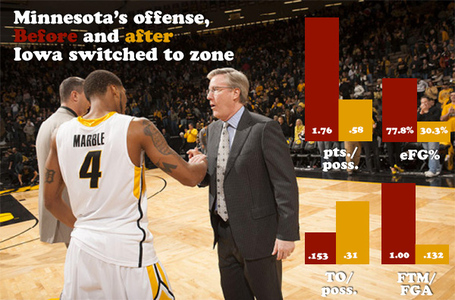 It's rare for a single coaching decision to effectively determine the outcome of a game, but Iowa's switch to zone defense at around the 11:30 mark in the first half did just that. Up until that point, Iowa's defense had looked slow and inattentive, giving up two three-pointers, nine free throws and a 77.8% effective field goal percentage. The Hawkeyes were attempting to apply their usual pressure, but Minnesota was too quick and managed to rotate the ball around it, leading to numerous open looks and Iowa fouls to prevent layups. When the Gophers went up 21-5, it felt like the game was a blowout and, what's worse, that this loss would eliminate the Hawkeyes from NCAA tournament contention. That all changed when Devyn Marble got fouled and went to the line.

Iowa applied a full-court press that transitioned into a zone defense when the ball passed half court. The Hawks do this fairly regularly, and the zone is usually just a way to smoothly transition from the zone-y press and the half-court defense. On the first possession, the zone forced a turnover. Perhaps on the strength of that possession, or perhaps because Iowa's coaching staff remembered how the zone completely flummoxed the Gophers in Minneapolis last year, the Hawks stayed in the zone. Then Minnesota didn't score for the next five minutes. Then they only scored six points in the final six minutes of the half. The zone completely transformed the game. It turned what had looked like a team of athletic high fliers into a group of indecisive basketball know-nothings. It was brilliant.

The zone also served to reignite Iowa's stagnating offense. In the final 11 minutes of the half, the team forced seven turnovers, which lead directly to four points but more importantly renewed the spirits of a moribund crowd. Mike Gesell by himself had four steals and a block (at the rim!) during that stretch. When Trevor Mbakwe tackled Zach McCabe out of bounds on a three-pointer to end the half, you knew the Gophers were in trouble.

There was more to the game than the zone, though. Iowa's offense recovered from an atrocious first seven and a half minutes, scoring a sterling 1.42 points per possession the rest of the way and shooting an eFG% of 58.8%. Devyn Marble regained his three-point stroke, Aaron White kept dunking on fools, and Iowa got some surprisingly impressive offense from Eric May, who not only had perhaps the dunk of the year and a three-pointer but a nifty step-back jumper off the dribble. And Iowa got to the line. A lot. They had two free throw attempts in the first seven and a half minutes of the game, and 29 thereafter. They also made their free throws, going 25-31 for the game from the line.

But it's really hard to get away from the way the zone transformed that game. Up until the switch, Minnesota's offense was scoring 1.76 points per possession (for reference, the best offensive team in the country, Indiana, averages 1.17 points per possession); after the switch, they scored a measly .58 points a possession. And it felt like they were lucky to get that. Their offense looked completely stymied and indeed mystified by the zone, almost as if they had never seen anything like it before. Their reaction was so amazing that only verse can do it justice (with apologies to John Keats):

On First Looking At Iowa's Zone

(Or the Confounding of the Tubby Smith by Fran McCaffery)

Much have I travell'd in the realms of black and gold,
And many goodly zones and defenses seen;
Round many one-three-ones have I been
Which coaches in fealty to Clair Bee hold.
Oft of one wide expanse had I been told
That deep-browed John Chaney ruled as his demesne;
Yet did I never breathe its pure serene
Till I heard McCaffery speak out loud and bold:
Then felt I like some watcher of the skies
When a new planet swims into his ken;
Or like stout Cortez when with eagle eyes
He star'd at the Pacific - and all his men
Look'd at each other with a wild surmise -
And said: "We'll never score again."

The thing is, none of this was surprising. As I said before, Iowa did exactly the same thing last year. My only question was why Fran McCaffery didn't go to the zone sooner. It all worked out, but that first seven and a half minutes was bad enough to sink most teams. And I hate to be critical after such a resounding win, but this is another data point that the current Iowa starting lineup stinks out loud. There's simply too much size (Woodbury and Basabe and White), too little quickness, and too little shooting. Basabe was frequently forced to guard a quick player like Rodney Williams, who took him far away from the basket and his normal strengths of rebounding and blocking shots, and Mbakwe was a terrible matchup for Woodbury. The team looks miles better when they have more balanced lineups in, with May or Anthony Clemmons in for one of the big men.

But any error Iowa's coaching staff made in the tepid start of the game doesn't compare to what Minnesota's coaching staff did. I almost feel like Minnesota fans should be preparing a coaching malpractice suit against Tubby Smith. I'm no expert in basketball strategy and I know that beating a matchup zone can be tricky, but Minnesota looked like they had zero idea of how to proceed. A quick Google search revealed this advice from a coach on beating the matchup zone: "In short - spead them out, reverse the ball, look to the screener." It seemed like Minnesota didn't do any of that. I almost hesitate to make suggestions about how Minnesota should improve, because it is awfully fun to watch the Hawks play them this way, but suffice it to say that the Gophers could have done a better job spacing Iowa out, moving off the ball, setting screens and lobbing ball over the zone to any one of their athletic leapers. Iowa played the zone well, don't get me wrong... but they didn't play that well.

In all, though, it was a very satisfying win, and one that provides a great deal of encouragement for the future going forward. Not only does Devyn Marble look like his old self, Eric May looks rejuvenated and just as spry as he was as a high-flying freshman. Mike Gesell seems completely comfortable in the starting point guard role and the team has displayed an ability to win in a variety of different ways. They're still on the outside looking in, but if they can win four of their next five games, they should stand a decent chance of making the NCAA tournament.