We've seen this movie before: Iowa builds a lead, then fritters it away late in the game in a calamitous combination of missed free throws, bad defense, stagnant offense, and (usually) one or two "how the hell did that shot go in?!" makes from the other team. 95% of that scenario played out again tonight -- and when D.J. Newbill's 3 went up with Iowa clinging to a 70-68 lead with 30 seconds to go, I was sure we were going to see the last 5% play out, too, with Newbill's three swishing through the net and Iowa suffering another gut-wrenching loss. But then a funny thing happened: the script changed. Newbill's 3 rimmed out, Iowa got the rebound, and the Hawkeyes made just enough free throws down the stretch to scrape out a 74-72 win, the first Iowa victory in State College since 2006.

Tonight the main beneficiary of those leaks was D.J. Newbill, who torched Iowa for 26 points (on 11/20 shooting), 8 rebounds, 2 assists, and 2 steals. The remarkable thing was actually that Newbill didn't do more damage to Iowa: he started the game making 9 of his first 12 shots, but made only 2 of his final 8 shots. Jermaine Marshall, Newbill's backcourt mate, added 14 points and 10 (!) assists on miserable 3/13 shooting (thankfully, he was also just 6/10 from the charity stripe), and Sasa Borovnjak tied his season-high with 14 points. At times, Penn State was the beneficiary of a little good luck and some fortuitous bounces (like the three that Newbill banked in), but Penn State's offensive eruption was helped by an Iowa defense that looked a little out of sync at several points during the game. At too many points, Iowa's defense looked out of position or had to scramble back to their positions. That was bad.

For the second straight game, Iowa was led on offense by Roy Devyn Marble, who had a team-best 22 points on 6/12 shooting to go with 3 rebounds and 3 assists. It was Marble's second straight game over 20 points (he had 21 versus Northwestern on Saturday) and over those two games he's definitely managed to shake out of his shooting funk: he's made 14/25 field goals in those games. Tonight, Marble also made hay at the free throw line, converting 9/11 attempts (and one of the misses was an intentional miss at the end of the game to bleed a little extra clock and prevent Penn State from having any hope of getting off a decent final shot), including several clutch free throws down the stretch. Marble got help from Melsahn Basabe (11 points, 6 rebounds, and 4 blocks, including one critical one at the end of the game) and Mike Gesell (13 points, 3 rebounds, and 3 assists), although it was strange that Gesell only attempted two shots after going 4/6 and looking great in the first half. After erupting for a career-best 27 points on 8/15 shooting in Iowa's first game with PSU this season, Aaron White had a much quieter game last night, scoring just 9 points on 2/4 shooting and again missing some key free throws down the stretch (which has developed into a very unwelcome trend).

For much of this game, Iowa appeared to be on pace to score 80+ points: they had 38 points at halftime on almost 50% shooting and had pushed their lead to 60-49 after an Eric May three-pointer with 11 minutes to play. Unfortunately, Iowa made only two field goals the rest of the way, a tough Marble floater in the lane and a Marble dunk moments later. Other than that, Iowa made no field goals, which is how a game that was 60-49 and looked to be the verge of a sizable blowout turned into a nail-biter in the last few minutes. At that point Iowa's shooting went ice-cold: a tough Marble pull-up floater and a Marble dunk. Iowa went 2/10 from the field over those last 11 minutes. They shot 50% from the field the rest of the game (22/44); had they managed to maintain that down the stretch, we wouldn't have needed to nervously gnaw off any fingers.

Still, the most important thing about this game -- the only thing that matters, frankly -- is that Iowa won. It was an ugly, ugly win. But style points don't really matter. Margin of victory doesn't really matter. They just needed to beat Penn State and they did that -- barely. On to the next game.

BONUS! And after the game, they celebrated the win (per Basabe's Instagram): 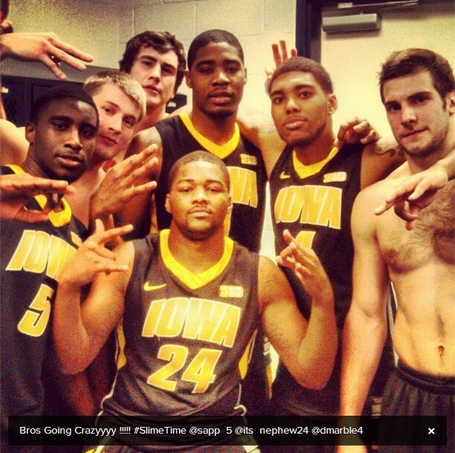 * Patrick Ingram can't buy any game-time, but his celebration game is flawless.

* Anthony Clemmons tells us exactly how many fucks he gives.

* Josh Oglesby is down, y'all.

* Eric May is still trying to figure out where he is and what is going on, because this never happened with Brennan Cougill and John Lickliter.