Like a Panzer III tearing through the lowlands of northern Europe, D.J. Newbill destroyed Iowa's defense. 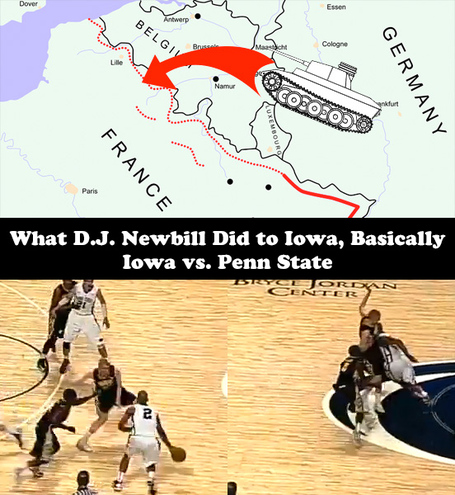 Iowa's pick-and-roll defense is predicated on one thing: convincing the ball handler to give up the ball. Last night, D.J. Newbill refused to cooperate, and it nearly won the game for the Nittany Lions. Normally, when Iowa sends a hard hedge at a pick and roll, the ball-handler evades it for a second and then tries to rotate the ball around the hedge. But this is exactly what the defense wants: the time it takes for the pass to travel through the air gives the defense time to recover; plus the pass itself is usually from deep in the back court to deep on the wing -- not usually a threatening position.

Newbill took a very smart approach to the defense, though. He recognized that once the defenders start to hedge, they pretty much have to stay with it no matter how far the ball handler takes them. If the ball-handler is strong enough and fast enough to get the hedge moving horizontally (i.e. toward the sideline) and not vertically (i.e. back up-court), then he can make it stretch out like a rubber band until it eventually breaks. Time and again, Newbill bulled his way through the man hedging on the pick and roll and did one of three things: 1) got around the hedge and exposed the soft underbelly of Iowa's defense, 2) drew a foul, or 3) split the double-team and, again, exposed the soft underbelly of the defense. He really had a fantastic game, from his opening throw-down on a backdoor alley-oop to his three three-pointers, eight rebounds, two steals and one block. The announcer mentioned on the broadcast that Penn State will have a formidable back court next year, with Newbill, Jermaine Marshall and a returning Tim Frazier, and he was right. Iowa has had the most trouble this year with guards who can make them pay for their attacking defense, and Penn State will have three of them next year.*

*Just last game I was complimenting Mike Gesell for his defense, but he got eaten alive by Newbill. Partially this was because it was a terrible matchup for him and he probably shouldn't have been guarding him. Newbill is 6'4", 205 pounds, and Gesell is listed at 6'1", 185 and is probably a little shorter than that. Anthony Clemmons did the best job of anyone on Newbill, and it's no coincidence that Iowa built their biggest lead midway through the second half when Clemmons was running the point.

This was the rare game where Iowa's offense won the game for them. Penn State is fairly small and weak on the interior, and Iowa did a good job of moving the ball around and finding open looks. The Nittany Lions are actually fairly similar to the Iowa team of two years ago. They play hard (especially on defense) and don't give up, but they are a little lacking on overall talent and depth. Iowa got good shooting from Devyn Marble and Mike Gesell, and just enough bonus offense from Melsahn Basabe (who has developed a pretty reliable 18-foot jump-shot) and Eric May to push them over the hump. There were plenty of nervous moments along the way, though.

Newbill had a very clean look at three with 33 seconds left that would have given Penn State the lead, and after the game he had had up to that point, I expected that shot to go in. Luckily for Iowa, the shot missed, and that was as close as Penn State got. For once, luck generally went Iowa's way. That shot missed, plus Jermaine Marshall, a normally good free throw shooter, missed three of four late.

Also, Iowa took some smart tactical steps that helped close out the game. With Penn State down three, they applied a full court press and then, when the ball got past half court, Marble fouled Newbill. After getting burned twice by threes late against Minnesota and Wisconsin, they finally adjusted and sent the opposition to the line instead. They did make some curious choices, though, including leaving poor free throw shooters like Aaron White and Melsahn Basabe in the game when they knew that they would be fouled, and not making defense-for-offense switches when Penn State got the ball back.