Devyn Marble went into the post, Mike Gesell shut down Dave Sobolewski, the team shot better than 40% from the field for once, and the result was a solid victory over jNW. 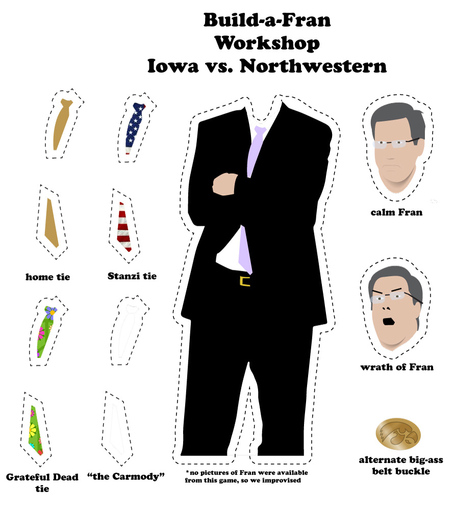 Do you know who is a good defender? Mike Gesell. He's gotten lost a few times on out-of-bounds plays, but his on-ball defense has been superb. He's aggressive and stays in close contact with his man, but he also has the quickness and positioning to recover on drives. He had a quiet game in the box score against Northtwestern (1-4 shooting, two assists, two points), but he may have been the MVP of the game for what he did to Dave Sobolewski. Sobolewski, who was Northwestern's only real scoring threat for long portions of the game, struggled to find room to breathe all night and ended up going 2-12 from the field and 0-6 from three. Iowa wound up winning handily, but remember that their lead was only two with 12 minutes left in the game. If Gesell's defense had been a little less focused and if Northwestern hadn't lost two starters to injury in the second half (Jared Swopshire suffered a knee injury and Alex Olah suffered a Woodbury clout to the back of the head), the game could have turned out very differently.

Iowa also benefited from a strong offensive game from Devyn Marble. Part of that was due to the quality of Northwestern's defense, which was refreshingly soft after a week of Minnesota, Purdue and Wisconsin, but part of it was due to improved shot selection. Twelve of his 21 points came on dunks or layups, four on free throws, on five on jump shots. He posted up more and in general played more like a small forward than a shooting guard, and it helped. The worst shots in basketball (percentage-wise) are long, contested two-pointers, and Marble has taken and missed a lot of those shots this year. He seemed to make a decision to get closer to the basket this game, and that could be the best thing for Iowa's offense going forward. Not only because Marble has a crafty post game and usually some size on the two-guards who mark him, but because anything that eliminates long twos that go in about 30% of the time will improve the team's efficiency.

The offense as a whole looked considerably better, but I'm willing to chalk that up to playing a poor defensive team for the first time in a while. The real story of this game was Iowa's continuing strong play on defense. If you want to feel better about this year's team, just go back and look at how many points per possession Iowa gave up to some teams last year: 1.22 to Creighton, 1.38 to Michigan State, 1.39 to Indiana, 1.38 to Northwestern, 1.42 to Oregon. This year, they've had two major slip-ups: Virginia Tech, who went for 1.27 points per possession on them, and Michigan, who went for an ungodly 1.42, but apart from that, they're pretty clean. They've kept Michigan State, Indiana, Minnesota, Purdue, Wisconsin, Penn State and Northwestern under a point a possession. Right now they're giving up just .903 points per possession on average, and rank 27th in the country in Ken Pomeroy's adjusted defensive efficiency rankings. It's been a sight to behold.

And their play against Northwestern was characteristic of the way they've made the leap forward: by blitzing the pick and roll on the perimeter and then switching and scrambling like crazy to recover once the ball is rotated. By sending Adam Woodbury or Melsahn Basabe out to double-team the ball-handler, Iowa has managed to limit clean looks from three and to force the ball out of the hands of the other team's best ball-handlers. This defense puts some heavy demands on Iowa's big men, who are regularly called on to pressure the ball 30 feet out and then recover back to the free throw line. It also calls on a lot of coordinated switching and rotating, which Iowa has gotten pretty adept at.*

* And as improved as Marble looked on the offensive end, he still looks a bit lost on defense. It's hard to tell sometimes who exactly is responsible for a defensive breakdown because of all the switching, but Marble was a part of several Saturday, usually due to ball-watching or slow rotation. If he is indeed playing injured, this could be one consequence: whenever Marble is forced to choose between switching on one of two men, he tends to choose the one that involves less running. Sometimes the man on the other end of the switch seems to expect him to make the alternate choice, and someone gets left wide open as a result.

All in all, another solid effort by these Hawkeyes. They definitely benefited from some injury luck (Swopshire in particular was giving them fits), but they also had about six layups rim in and out, so this seems like about the result they deserved on the day.