Despite the ugly nature of the game, Iowa learned a few things: about their new lineup, about Zach McCabe, and how they're going to generate points going forward. 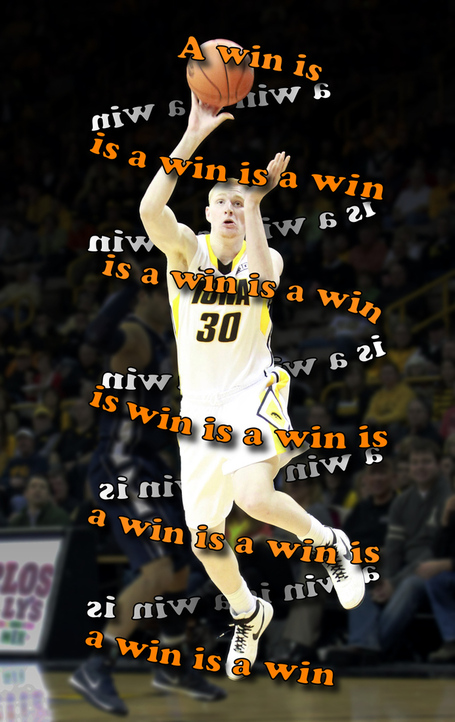 You sort of have to grade games like this on a curve. Yes, Iowa won, which is great, but they were supposed to win. Jeff Sagarin's "Predictor" ratings says that Iowa should beat Penn State by 11.5 on a neutral court, and home court advantage is usually worth about four points, so the Hawks should have won by 14 or 15 points. They won by nine, and looked kind of sloppy doing it. So, maybe a B- game. Not fantastic, not terrible, but good enough.

The game was ugly, but there were some interesting developments for the Hawks going forward. For one, we saw the new-fangled gigantor starting lineup of Woodbury, Basabe and White (along with Marble and Gesell). In terms of shooting, this lineup leaves a lot to be desired (also note that Iowa quickly gave up a 10-3 lead to Penn State to start the game), but perhaps this is Fran's way of rewarding Basabe's strong play while also not alienating Woodbury. I don't really see this lineup working as a long-term solution, for two reasons: 1) it's too easy to defend, and 2) it forces Mike Gesell to play point guard. Gesell is a perfectly good point guard, but he's a much more dangerous player as a shooting guard. He's simply too short to get his shot off one-on-one against most defenders, but coming around picks he can find space. Considering that he's the one shooter on Iowa who has been somewhat reliable lately, it's a shame to waste him by sticking him at point guard.

The other interesting development was the solid play of Zach McCabe. His line doesn't jump out at you, but five points, four steals, three rebounds and two assists in 12 minutes is pretty impressive. What was really encouraging, for me at least, was seeing McCabe and Aaron White work together again in the pick and pop. This was something that Iowa started doing late last year, when McCabe was dragooned into the role of center (it was a horrible defensive unit, but that's another story). Because both players are good enough outside shooters, and because White is such a strong finisher at the rim, it's tough for teams to figure out just what to do when White goes around a McCabe screen. Usually both defenders sag under, leaving McCabe unguarded at the three-point line. And it's easy to reverse it (White setting the pick and McCabe driving) and reset it. It's not guaranteed points, but it kind of works. If you think of an offense as a collection of modules that connect together and produce points at varying degrees of efficiency, the White/McCabe module is one of the few in Iowa's offense that works at all well.*

* There's also the "Aaron White gets fouled" module and the "Mike Gesell runs around screens module", but that's about it.

The announcers kept talking about how impressive it was that Iowa had assists on almost all their baskets (18 assists for 20 made field goals), but I took another lesson from that stat: Iowa does not have the ability to score one-on-one. At all. If they want to score, it has to come through methodical movement and screen-setting. McCabe and White work well together in that context, so it was a hopeful sign to see them doing their thing once again. McCabe continues to be an iffy defensive player, so that lineup might need Olaseni, Basabe or Woodbury in to protect the rim, but generating some offensive movement might be worth a small amount of defensive softness. Put it this way, if it comes down to a contest for minutes between McCabe and Josh Oglesby (1-5 last night), I would opt for McCabe.

A quick note on Oglesby. The shots are not going down for him, obviously, but the thing that struck me was how slow he looks out there, especially for a two guard. Ideally, he should be like Matt Gatens last year, or Ray Allen or Rip Hamilton -- someone who sprints around screens, catches and shoots, and wears out the defense keeping track of him. Right now, he makes those cuts, but they're not fast enough. That means fewer open shots for him, and fewer shots in rhythm. He also looks a little bigger than he did last year -- not overweight or anything, just more solid. It almost seems like a case of Melsahn Basabe redux: a player who worked to get bigger and stronger but got too big to do what he does best. Maybe that's just the speed we have to expect from Oglesby, but it seems to be hurting him on offense and on defense, where he is not very quick running out at shooters.