Share All sharing options for: A Tale of Two Halves: Iowa beats UAPB 86-61

There is not much to take away from Iowa's 86-61 dismantling of Arkansas-Pine Bluff Sunday afternoon.  The Hawkeyes opened a 52-15 lead at halftime, sat the starters for almost the entire second half, and coasted to a comfortable victory.  All of this was expected.  After all, UAPB is terrible.

For analysis purposes, the game was a non-entity. Aaron White played just eight minutes; Roy Devyn Marble played ten.  In fact, the only player to be on the court for more than 20 minutes for the Hawkeyes was Jarrod Uthoff, who not coincidentally led the team in scoring with 16.  Arkansas-Pine Bluff decided to stick with their 1-2-2 spread zone, pressuring perimeter passing lanes but leaving them woefully thin on the baseline.  Note to other teams playing Iowa: Do not be woefully thin on the baseline.  For the first half, Iowa found interior holes in the zone at will and converted those to open looks, either in the lane or on the perimeter after another pass.  For the first time in a long time, the Hawkeyes were able to convert perimeter opportunities at a high rate, thanks in no small part to the return of Josh Oglesby.  The junior from Cedar Rapids made his first four three-point attempts, finishing 4/5 on the day.  In total, Iowa went 10/17 from behind the arc, a 59 percent rate.  Zone defenses -- a bugaboo of this program for five years before this fall -- don't seem to be a problem anymore. 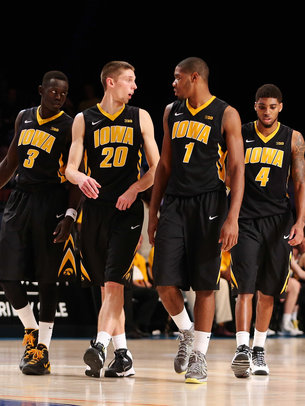 Where do the Hawkeyes sit as the non-conference schedule comes to a close, and just how close are we to a trip to the Big Dance?

As for the second half, in which Iowa's field goal percentage plummeted and turnovers skyrocketed, it was the inevitable byproduct of a 37-point halftime lead, a starting backcourt on the bench, and a host of guys who don't usually play getting their most significant playing time of the season.  Of Iowa's 27 turnovers -- yes, it was that bad -- 17 were committed by the bench.  Melsahn Basabe had four, mostly because he's Melsahn Basabe and that is what you trade to get his scoring and rebounding.  Gesell's three turnovers is high, especially considering how little he played, but his track record is good enough to ignore this one blip. Otherwise, there isn't an individual turnover number that is particularly concerning, and the total is not that far off of what UAPB has done to other teams.

Sunday's win puts Iowa 26th in the projected RPI rankings, well within the projected margin for an NCAA berth.  Normally, we could expect some slippage during Iowa's extended Christmas break -- the Hawkeyes get nine days off before conference play opens against Nebraska on December 31 -- but the teams around Iowa are also closing up the non-conference season.  If there was going to be a downward move, it would have been last week, with teams scurrying to finish the December schedule and Iowa sitting tight off a loss to Iowa State.  That didn't happen, which is a good sign for March.  It's all systems go now for the Big Ten.