Well, that got out of hand quickly 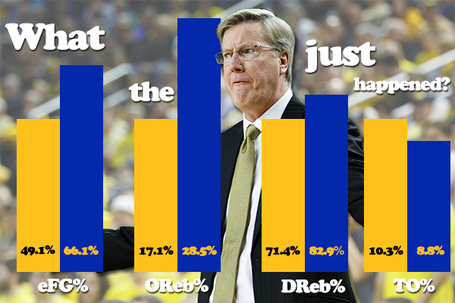 One minute and 18 seconds: that was all the time it took for Michigan to push its lead from three to 11 at the end of the first half, and to turn what had been a closely contested game into an incipient blowout. And the way Michigan scored those 11 points tells you a lot about why Iowa lost: first, Eric May fouled Tim Hardaway Jr. off the ball, giving the Wolverines two foul shots; second, Josh Oglseby missed a three and then failed to get back on defense, allowing Michigan to run out and get an easy dunk; third, Dev Marble missed a three, and Adam Woodbury gave an unnecessary foul on Glen Robinson III, negating what would have been an easy put-back by Aaron White; lastly, Marble took a three with six seconds left on the clock, giving Michigan just enough time to push the ball down the court for one more layup (Iowa failed to get back when the shot went up, natch).

Michigan is a good team. They have a future NBA player in Trey Burke, skilled slashers in Robinson and Hardaway Jr., good shooting across the lineup, and solid interior play with Jordan Morgan and freshman Mitch McGary. They will go far into the tournament this year. But still, Iowa made it very, very easy for them to pull away in this game. All the little things that Iowa needed to do to hang around -- fighting through screens to contest shots, getting back on defense, rotating quickly -- they didn't do, and that was enough to make a close game into a romp. You'll notice that all of those little things came on defense. Iowa didn't actually play that poorly on the offensive end. Their 49.1% effective field goal percentage* was a little better than average for Iowa, and 67 points in 68 possessions is mediocre but not terrible. No, it was the ridiculous 66.1% eFG% and 1.43 points per possession Iowa allowed to Michigan that was out of character for the Hawkeyes. Iowa put no pressure on the ball (Michigan had just six turnovers), allowed Michigan open looks from three, and failed to control their defensive glass. It was a pretty comprehensive demolition job.

More than anything, it felt like Iowa gave its all to hang with Michigan for the first 19 minutes, then got tired. They let up for a few minutes, and that was enough to open the floodgates. Fran McCaffery, displeased with the defensive effort to start the second half, put in five substitutes (Ingram, Oglesby, May, McCabe and Olaseni, I think), but that offensively-challenged group scored just three points in five minutes and failed to cut into the lead. By the time the starters came back in, the lead was close to insurmountable, and the team looked spent.
Stray observations: