A game that was painful to watch in many, many ways 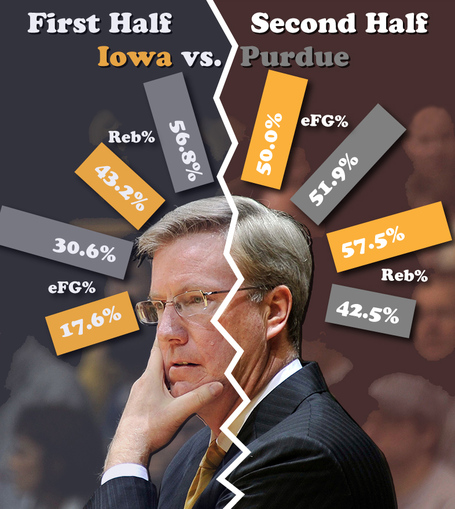 That one is going to sting, no two ways about it. Iowa was in position to win on the road, despite having played what might have been the most horrific half of offensive basketball this side of Northern Illinois, and they let it slip away. We could focus on all the little things that didn't go right at the end of the game -- the offensive rebound Iowa gave up that allowed Purdue to cut the lead to one, Devyn Marble's missed free throw with 47 seconds left that kept it a two-point game, his missed shot as time expired -- but that would mean ignoring the portion of the game where everything really went wrong for the Hawks: the first half.

Sixteen points. That's the number of points Iowa had in the first twenty minutes. About half a point a possession, or, to put it another, more depressing way, one basket every four trips down the court. It was painful to watch. Iowa went without scoring for five minutes ... three times. In part, it was the result of the usual harassing Purdue defense, but mostly, it was due to the fact that Iowa couldn't do two things: beat anyone off the dribble or make open shots.

The beating people off the dribble part probably isn't going to change. Marble was the one player who had a knack for that, but he seems to be a greatly diminished player since his ankle injury. Anthony Clemmons sometimes shows flashes of driving ability, but doesn't quite have the lightning quick speed or finishing ability to compensate for his diminutive stature. And as far as shooting goes, what can you say? Iowa had decent looks from three, and they didn't go in. Josh Oglesby went 0-5, Marble went 2-11, Zach McCabe went 1-5, Clemmons went 0-3. The offense did an adequate job of generating open looks, but Iowa seemed to collectively lose the ability to shoot in the first half.
It's a tribute to Iowa's defense that they went into the locker room only down three. As bad as the offense was, the defense was equally good. Iowa threw a mix of man and zone at Purdue and forced the Boilermakers into a series of ineffective jump shots from the midrange. Purdue is not a good three-point shooting team, and Iowa did a mostly good job of keeping track of their one good shooter, D.J. Byrd. It really was a heroic effort by the defense to keep the game close even though the offense wasn't doing anything (in this respect it was sort of like an Iowa football game).
The second half was more recognizable as the sport of basketball, and two players really stepped up for Iowa: Mike Gesell and Melsahn Basabe. Gesell settled into a Matt Gatens-esque role of running around screens and taking long jump shots. He's not ideally suited for the role, given his height, but he does have the speed and craftiness to use picks well. For long stretches, it felt like he was the only player on Iowa who was capable of making a jump shot. Coming up with some reliable offensive attack will be Iowa's great challenge for the rest of the year, and Gesell could be the key to solving that riddle. It's not that he's an unstoppable weapon, but he's just good enough at making threes that teams respect him and guard him out to the three-point line. That generates just enough movement and space that Iowa's offense can break free of the static gridlock that so often afflicts it.
And Melsahn Basabe is playing like the starting center. It's not just that he looked better than Adam Woodbury against Purdue -- he looked more athletic than everybody. If he continues to play 30+ minutes, it doesn't really matter whether he starts or not -- he'll be the de facto starter -- but he needs to be in the game as much as possible. He's blocking shots, grabbing rebounds, running the court and finishing at the rim. He looks like the Melsahn of his freshman year.
Aaron White also had a strong game, especially down the stretch, when he had a tough and-one and a difficult pull-up jumper. In the early parts of the game, the offense was too congested for him to get free, but as the game went on and the flow of action improved, he got more space to use his athleticism.
Beyond that, there was not much to brag about from Iowa's offense. Purdue did its usual job of almost-fouling-but-not-fouling, and Iowa unfortunately obliged them by not even attempting shots if Purdue restricted their shooting space. By the end of the game, Iowa seemed to have figured out that they just needed to take the shots and force Purdue to foul them rather than wait for a wide open shot.
So this one will hurt. This was a gettable road win in conference, against a team that, frankly, is inferior to Iowa in terms of talent. There are eleven conference games to go, which means Iowa will need to go 7-4 to finish with a .500 record in conference. There are six games left that Iowa probably should win -- Northwestern at home, Penn State home and away, Nebraska home and away, and Purdue at home -- which means they'll need to sweep those games and find a win against Minnesota (home and away), Indiana, Illinois and Wisconsin. Doable, but one game harder now.
Stray Observations