Iowa came out inspired and played basically a perfect defensive game for the first 20 minutes of the game; the last 10? Eh, not so good. 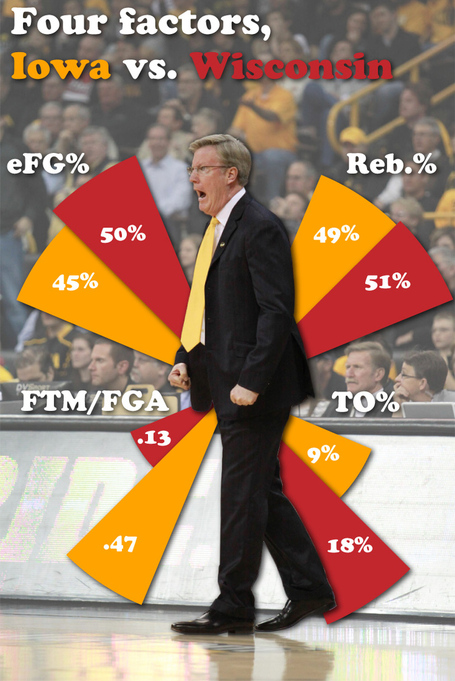 To get a true sense of this game, you need to break it up into two portions: the first 30 minutes and the last ten. In the first 30 minutes, Iowa played like maniacs, harassing Wisconsin up and down the court, denying three-point shots and owning the interior; in the last 10, they looked like a team that had used all of its energy up and was hanging on for dear life. You can see the difference in the quality of Iowa's defense by looking at a few offensive statistics for the Badgers for those two portions of the game:

As shockingly good as the Iowa defense was in those first 30 minutes, it was equally bad in those last 10. Everything that had been done perfectly at the beginning of the game was just a split second late at the end, and that was enough to give Wisconsin the space to make threes, get rebounds, and get the ball inside for easy scores. Iowa's offense stayed pretty much on an even keel the whole game, hovering around a point per possession, but the bottom of the defense really dropped out.
A lot of this has to do with emotion and intensity, of which there was an abundance at Saturday's game, for obvious reasons. Iowa came out and expended a tremendous amount of energy to start the game, especially on defense. Anthony Clemmons and Mike Gesell deserve particular credit for their tight perimeter defense on the Wisconsin guards, but Fran McCaffery's scheme requires that every player be prepared to sprint out to the three-point line to show on a ball screen and then sprint back to the paint to cover his man. It can produce some amazing results, but it also takes its toll. Once the team's caloric reserves drop below the level needed to keep up that manic intensity, the defense can start to unravel with remarkable speed. This game was a striking example of it, but so was their recent game against Michigan and last year's NIT game against Oregon. On multiple occasions, the Hawks have expended almost all their energy in the first half/two-thirds of a game and then had to hang on for dear life as the clock wound down to zero.
In a way, the Iowa coaching staff is facing an interesting game theory-type problem. If we imagine (simplistically) that each team has a high, Level A of energy and a low, Level B of energy, and that the coaches can demand that Level A for a certain amount of time (say, 15 minutes) at any point in the game, the question becomes: "When should a coach tell his team to go to Level A"? If he asks them to use Level A to start the game, the team will likely jump out to an early lead, but may face a furious comeback in the final moments. And if he asks them to use Level B to start the game, his team may get so far behind at the start that going to Level A late won't be enough to bring them back. In this game, it looks like Iowa "chose" to come out at Level A and Wisconsin "chose" to come out at Level B, giving the game its lopsided quality.* It's sort of like in the old arcade game, Ivan "Iron Man" Stewart's Super Off-Road, where you could blow through all your nitro boosts right away and send your miniature truck hurtling across the mud track to an early lead, but then would be forced to fend off your opponents as they slowly caught up as the race went on.
* Of course there's also the possibility that the two coaches will both choose to come out at the same level of intensity, which would presumably give a more even result throughout.
I'm not sure if there's any obviously superior option here -- taking the lead in any way you can is a pretty good strategy, whether early or late -- but I thought it was worth mentioning that Iowa, especially at home, tends to use up a lot of energy early. Some teams, especially in the NBA, seem to engage in a kind of rope-a-dope strategy, wherein they conserve energy and wear their opponent out in the first three quarters, then blitz them with startling energy in the fourth quarter. The Miami Heat tend to do this, for example. It's a good way to not wear players out too much, but it obviously has risks attached with it -- observe Miami's somewhat disappointing 26-12 record and their losses to teams like Washington, Milwaukee and Toronto.
But back to the actual game, especially the good first 30 minutes and not the terrifying last 10. Iowa played simply the best defense they have all year. They denied the three-point shot, they rotated like crazy to cover the ball when it swung, and Adam Woodbury played Jared Berggren to a standstill in the post. It was a thing of beauty. Wisconsin, of the 22nd best offense in the country (per KenPom), had 10 points with three and a half minutes left in the first half. Ten points! Zach McCabe blocked a guy's shot, Aaron White pulled off a nifty Euro-step layup and-one on the break, I think I saw Josh Oglesby kill a guy -- it was insane!
But it couldn't last. It felt like all the emotion was building to the Chris Street tribute at half, and after that, a bit of the lunatic intensity went out of the building. Wisconsin got a few lucky bounces that gave them open threes, which they made, and then George Marshall went bananas, and Iowa looked like a team that desperately wanted the clock to tick down to zero as fast as possible. They made it work in the end, thanks in large part to some great free throw shooting by Aaron White down the stretch. It will probably never be easy with this team, but their highs are pretty exhilarating to watch.