Why yes, I did just drop a reference to a Jay-Z movie that nobody has ever seen in this title.

Share All sharing options for: Streets Is Watching: Iowa Holds Off Wisconsin 70-66

The Iowa Hawkeyes jumped out to a 30-10 first half lead, then held on through a furious Wisconsin comeback to defeat the Badgers 70-66 Saturday night at a raucous Carver Hawkeye Arena. Four Iowa starters scored in double figures, led by 17 points from forward Aaron White and 13 from Roy Devyn Marble. White also led Iowa in rebounds. Wisconsin got 20 points from reserve guard George Marshall in defeat.

Carver Hawkeye Arena was filled to capacity for the Saturday night contest, and for good reason. Not only was Iowa's fiercest basketball rival making its annual trip to Iowa City, but the game fell on the 20th anniversary of the death of Iowa basketball star Chris Street. Iowa channeled the emotion into a blazing start, building an early lead and extending it to 20 points over a four-minute stretch late in the first half. Halftime festivities included a number of former Chris Street Award winners, including BHGP favorite Duez Henderson, as well as a tribute video. Iowa also took the opportunity to needle Ryan and the Badgers over the Jarrod Uthoff transfer saga: 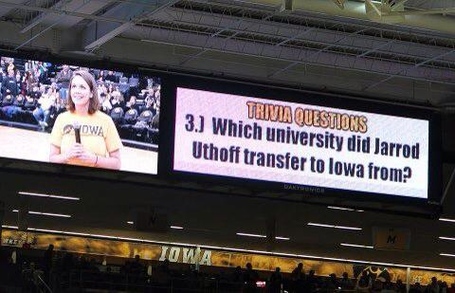 The second half played out in total reverse, with Iowa slowing the game's tempo and Wisconsin finding its outside range. The Badgers whittled an 18-point Iowa lead with 17 minutes to play down to three points in the game's final minute, primarily through the red-hot shooting of Marshall. Iowa stood strong at the free throw line, however, and a late steal by Eric May cemented the Iowa victory.

The win moves Iowa to 13-5 overall and 2-3 in the Big Ten, catapulting the Hawkeyes into the Kenpom top 30 for the first time this season. Wisconsin suffered their first conference loss of the year, falling to 4-1 in league play and 13-5 overall.

Other observations from CHA Saturday:

Adam Woodbury again struggled, scoring just 2 points while fighting foul trouble throughout the game. Part of his recent trouble has clearly been the grind of his first collegiate season, but Big Ten coaches have also figured out his game rather effectively. On the defensive end, Woodbury is great at altering shots but occasionally commits fouls on second-chance opportunities. On offense, he is wholly dependent on his left handed hook shot as an offensive weapon. Jared Berggren, who primarily drew the duty of defending Woodbury, played the freshman cener heavily toward his left hand, effectively nullifying Woodbury on the offensive end. That tactic will persist until he can show he can make other shots.

Marble had one of his finest games of the season, letting the game come to him, distributing the ball as he did in 2011-12, and nailing a step-back three point basket to stop a Wisconsin rally in the second half. When he plays like that, he's the most complete player on most courts.

Wisconsin is such a perfect foil for Iowa: Stark contrast in styles, constant battles on the recruiting trail, and Bo Ryan as loathsome face of the entire operation. Ben Brust, who committed to Iowa when Todd Lickliter was coach and changed his commitment to Wisconsin after Lickliter's termination, was booed lustily every time he touched the ball. Same went for Zach Bohannon, a Cedar Rapids native and son of a former Hawkeye, though on a lesser scale. And the Uthoff trolling just added fuel to an already-raging fire in CHA. When Berggren and Mike Bruesewitz began complaining to officials about interior contact -- after 15 years of Badger basketball predicated on the idea that the refs can't call a foul on every possession -- the roof almost came off the place. Just a wonderful game to watch live.

Basabe's dunk was probably the best slam I've ever seen live, and it came at the end of one of the greatest sequences I've ever witnessed. Anthony Clemmons, at 6'1, blocked 6'6 Ryan Evans on a drive to the hoop, then recovered the ball and ran the break culminating in Basabe's jam. If you watch it again, watch Clemmons draw the defender out of the way with that subtle move into the lane. He's still extremely streaky, but Clemmons is playing beyond his years at this point.

With that said, Iowa's offense stunk out loud for most of the second half, as McCaffery tried to milk the clock. Doing so allowed Wisconsin to dictate not just the tempo, but the flow of the game. They got better looks, and they made them count. Iowa's a great perimeter defensive team -- more on this later -- and does an excellent job of converting that into transition baskets. But they're still a poor outside shooting team and a work-in-progress in half-court sets. This team had flaws, but they aren't the same talent-related flaws that we are used to seeing.