What is Dispatches from Blogfrica? Pretty simple: I ask questions of a blogger for an opposing team; he answers. A truly revolutionary idea, no? Next up: Phil from Bucky's 5th Quarter, SB Nation's excellent Wisconsin blog.

1) So -- 4-0, beating Indiana in Assembly Hall, alone on top of the Big Ten. Well done. Did you see that coming after a slightly rocky non-conference season?

Starting before the season, all the way up until the Illinois game, I had the Indiana game chalked up as a loss, no questions asked. After battering the Illini, I knew there was hope. In all honesty, I thought giving the Hoosiers a tough game would be a moral victory. The thing about the Big Ten is that 4-0 isn't even a quarter of the way to contending for a league title, so I'm not willing to put Wisconsin in the driver's seat yet. And the kicker? The eventual Big Ten champ has not lost to Iowa since the 2006 season. This one's big.

2) Along those same lines... the Badgers seem to be getting better with every game lately: from struggling through an ugly 47-41 win over Nebraska to shredding Illinois to knocking off Indiana in Bloomington. Has anything significant changed? Or are guys just riding hot streaks right now?

Things have changed. For one, after switching from George Marshall to Traevon Jackson at the point, Jackson has shown an increased comfort level and confidence. Team defense has picked up noticeably. Lastly, we've seen a lot more aggressiveness than we're used to. The number of Badger-related highlight-reel dunks, mostly from Jared Berggren, is at an Alando Tucker-era high. Dare I say, white-boy swag?

3) Seriously, how does Bo Ryan keep finding guys like like Jared Berggren, Jon Leuer, and Brian Butch? Is there a secret farm up there? Did Alvarez sanction an illicit cloning operation? Are they really the same guy and he just keeps changing jerseys every 3-4 years? It's uncanny.

The secret Minnesota farm may have closed up shop, but it did produce Leuer and Berggren. Outside of Bo Ryan's day-to-day teaching of the game, one of his best attributes is knowing what he wants in recruits and sticking to it. Harder to find those attributes in 7-footers, but his success rate is relatively high. Hopefully Frank Kaminsky can continue the line.

4) I suspect the Uthoff-Iowa-Wisconsin stuff won't really heat up until next season, when he's actually playing, but do you think Bo is ready for a slew of Uthoff-related chants on Saturday night?

Serious question: What could they possibly chant? "He loves it here -- take that!" ... "Bo's an a-hole, CLAP, CLAP, CLAP-CLAP-CLAP." Hopefully it's something clever. Bo will never acknowledge hearing a single thing the crowd says; didn't you hear how much tougher life was growing up in Chester, PA?!?

With all the hubbub over the IU win, I actually hadn't thought about Uthoff until seeing some of Bo's non-answers to Uthoff inquiries from the media Thursday. You're plenty right about it heating up next year, but even Uthoff's trip to Madison will be much more interesting.

5) So why hasn't Ryan Evans gone the full Nerlens Noel yet? 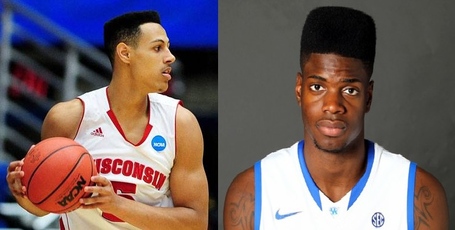 Because Evans is a smart cookie. A student of hip-hop history, he obviously has seen the Will Smith Fresh Prince flattop is more palatable to mainstream America and far more marketable over time than Chris Reid' "Kid" look. This is a business decision.

Tough one. Iowa really has no bad losses and we know the Hawkeyes give Wisconsin problems pace-wise. Like Pomeroy, I thinks it's a toss-up. I'll take the improving Badgers in a 1-2 possession game, but won't be surprised at all if Iowa wins at home.

Thanks for being a good sport, Phil. You can check out Phil and the rest of the B5Q crew at Bucky's 5th Quarter. You can also follow him on Twitter at @hoopsmarinara and Bucky's 5th Quarter at @B5Q. The Iowa-Wisconsin game is in Iowa City in Saturday, January 19 at 7:00pm CT, with television coverage from BTN.