If Iowa plays Northwestern in basketball and nobody sees it, did they really play? 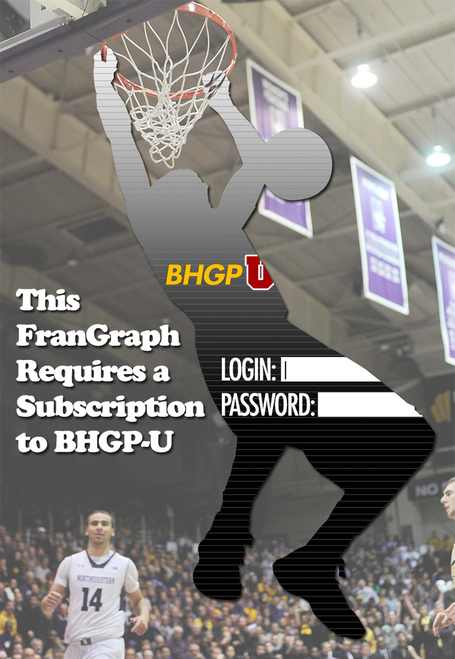 Maybe we should be grateful that ESPN kept this game away from most of the viewing public, because it was pretty hideous. Northwestern looked like a much diminished squad from last year, absent John Shurna (graduated), Drew Crawford (injured) and JerShon Cobb (suspended). When Dave Sobolewski is forced into an Allen Iverson volume-shooter role for your team, you know you're in trouble. But to Iowa's credit, the team played patient basketball and finished the Wildcats off with smart passing and lots of dunks, including several by Big Red, Dunk L'Orange himself, Aaron White.

It's interesting to watch White as he develops from an offensive rebounder/dunker into a more well-rounded offensive player. Teams are fearful enough of his dunking ability now that he is given a little space on the perimeter, and he's starting to take a few steps toward using that space to develop a low-post/pull-up game. In a way, his development is akin to Blake Griffin's (although at not quite the same insane athletic level). After a season of Griffin dunking on people's faces and Mozgov-ing and what not, defenses started to sag back and force him to take jumpers. At first that worked to frustrate him, but this season he has developed a reliable enough jump shot that teams pay a price for leaving him open on the perimeter. White is working on some unorthodox post moves, which is great, but it's that jump shot that will make or break him as a primary scorer. Can you imagine if teams had to respect Aaron White out to 18 feet? Or to the three-point line? He would be very hard to stop. I have a feeling that White will be forced to take on that kind of scoring role soon, especially if Devyn Marble goes out with an injury again.

Also, he threw a shoe, right at Fran's head! Easily the highlight of the game.