A game with no order, continuity or flow gets the flow chart treatment. 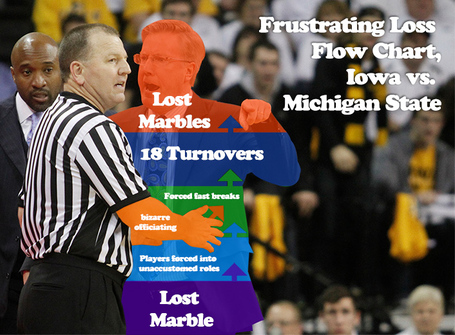 There's not too much to add to Ross's great recap of this miserable game, but I will add just a few notes.

This game exposed, more clearly than most, how much of a problem Iowa has merely creating open shots on offense. Getting an open shot usually comes down to having some appreciable difference over one's defender -- in height, in speed, in strength -- and then using that advantage to create space to get a shot off. For Iowa, the players with advantages in those three areas generally aren't shot-makers, and the players who are shot-makers don't have any of those advantages. The team's best shooters -- Mike Gesell, Josh Oglesby ---- are either too short or too slow to get their own jumpers, and the taller players -- Aaron White, Adam Woodbury, Gabe Olaseni, Melsahn Basabe -- aren't too threatening as shooters. That's why Dev Marble is so critical to this team. He's the one player with the height, speed and strength to manufacture a decent shot without much help. Without him, the team is really lost on offense, and it showed against Michigan State.

The poor quality of Iowa's half-court offense directly contributed to many of those ugly turnovers. Iowa's coaches and players know that the team's chances of getting a quality shot in the half court are low, so players are constantly on the look-out for chances to throw the ball ahead for easy fast break baskets. I would be shocked if this isn't something Iowa practices, because they do it all the time. Whenever a player gets a defensive rebound or a turnover, their head is up and looking for an outlet pass. Too often, they force a bad throw that is deflected, and because Iowa's players are all streaking down the court for the fast break, there's usually no one back to defend when the ball winds up in the opposition's hands.

This is pure conjecture, but I would guess that Iowa's mediocre defensive rebounding statistics (103rd in the country in opponent's offensive rebounding rate) are connected with this desire to fast break. Players are taught to leak out and look for the break, which leaves fewer players back to cover the glass. When opponents do manage to grab offensive rebounds, those leaked-out players are up the court and in no position to help on defense.

Just to be clear, I'm not saying that this emphasis on fast-breaking is necessarily a bad thing. Iowa truly is wretched in the half-court, and it could be that taking these kinds of gambles to generate points is worthwhile, especially in a game where the team's one reliable shot-creator is out with an injury. And of course the players could do a better job of judging when it's smart throw the ball ahead for a fast break and when it's not. In this game, the Hawks had 11 turnovers that led directly to 22 Michigan points on dunks or layups -- that's unacceptable. If just a handful of those turnovers were excised from this game, Iowa would have probably won.

It's worth considering the possibility, though, that Iowa's current emphasis on pressing, causing turnovers, and sparking fast breaks, is misguided, given the makeup of the team. The big surprise this year has been how dramatically the team has flipped from a good offense/bad defense team to a good defense/bad offense team. But what's really interesting is how, exactly, the team has become a good defensive team. It's not by forcing turnovers (they're 192nd in the country in opponent turnover rate), and it's not by limiting opponent's offensive rebounds (as mentioned above); rather, it's by limiting opponents to poor shooting percentages (27th in the country in opponent's eFG%) and not fouling very much (40th in opponent's free throws made per field goals attempted).

When you think about the personnel Iowa has, it's not the type of super-athletic, long team that you would typically think of as a pressing team (e.g. Missouri, Arkansas in their glory years). The Hawks are pretty tall, pretty strong, and kind of slow. They are, in other words, a lot like Wisconsin. And when you think about how Wisconsin succeeds on defense, despite these limitations, it's by getting back on defense, limiting fast breaks, playing sound team defense in the half-court and then securing the defensive rebound before even thinking about moving the ball up court (which they then proceed to do in a staid fashion). Iowa has the personnel to do that.

The only problem, of course, is how the Hawks are ever going to score if not in transition. Without a reliable half-court option, they will always be tempted to move the ball up the court recklessly in the hopes of getting an easy shot. And that's a recipe for the kind of ugly turnovers that plagued them against the Spartans.