The boiled-down essence of the game, poured in graphic form over the form of Iowa's head coach 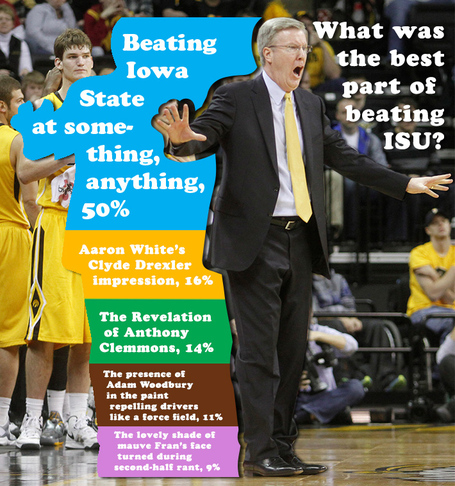 Greetings! It's been a while, but now that Iowa has started to play some more high-profile games, the photos of Fran are flowing into the BHGP offices again, and with them, the key link in the Fran-Graph supply chain has been reestablished. Just a few thoughts on Iowa's impressive win over Iowa State last night:

It was just one game, but this felt like a real step forward for the team. Clemmons seems to be gaining confidence at the point, Aaron White is showing no regard for human decency, and Iowa even survived an off night by Devyn Marble. It was a complete team effort, with everyone scrapping for loose balls and playing focused basketball on both ends. Good stuff!