What's in store for Iowa now that conference play is upon us?

(EDIT: I added a poll, so you can weigh in on how many B1G wins you think Iowa will get this year.) 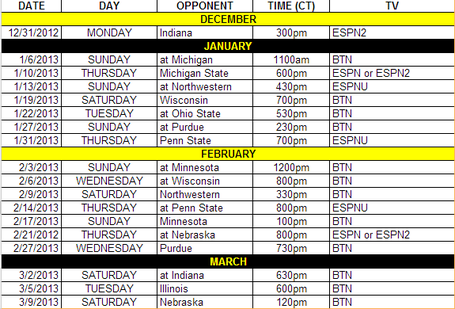 Iowa ended non-conference play with an 11-2 record, their best record heading into Big Ten play since going 12-1 in 2004. (Iowa started the year 11-3 in their standout 2005-06 season.) And yet that's about what we were expecting from that non-conference schedule, honestly. It was really a 4-game schedule (Wichita State, Virginia Tech, Iowa State, UNI) and Iowa went 2-2 in those games. The other nine games were all games in which Iowa was solidly favored and they simply managed to take care of business against overmatched opponents -- which, admittedly, is something they've struggled to do in recent seasons. Avoiding bad losses (coughcoughCampbellcoughcough) was a priority for Iowa and they managed to do that nicely.

But now the Big Ten season is upon us and things are going to get rougher. What does Iowa need to do in league play to put themselves in contention for an NCAA berth? Twenty wins overall should put them squarely on the bubble, and quite possibly on the good side of that bubble. A .500 record in a the best conference in the nation and twenty overall wins would be a strong statement. Getting to that mark would require a 9-9 record in Big Ten play -- is that feasible? With Iowa's schedule... yes.

Much has been said about the brutal opening kick to Iowa's B1G schedule and it is pretty nasty: four of their first six games are against teams currently ranked in the top 20, including the first three. But after that it's an exceedingly manageable schedule. The unbalanced schedule is very kind to Iowa, with just one game apiece against Michigan, Michigan State, Ohio State, and Illinois -- aka, arguaably four of the five-best teams in the league. Among the teams Iowa plays home-and-away this year, Indiana, Minnesota, and Wisconsin look like the stiffest competition. But Iowa also gets eight games against Penn State, Northwestern, Purdue, and Nebraska -- aka, the soft underbelly of the league.

And that's the key difference: the top-to-bottom depth of the league took a definite hit with the season-ending injuries sustained by Northwestern's Drew Crawford and Penn State's Tim Frazier, plus the rebuilding blues Purdue is suffering through this year. The top of the league still looks very, very daunting... but the bottom of the league looks much, much more vulnerable than it did earlier in the season. If Iowa can win even 6/8 against PSU, jNW, Purdue, and Nebrasketball, they'd need to find just three more wins from their remaining 10 league games.

Obviously Iowa can ill afford to overlook a team or assume wins against anyone -- they lost at Northwestern and Penn State last year and lost at home to Nebraska. Winning at West Lafayette (something Iowa hasn't done since 2006) doesn't figure to be easy, even against a rebuilding Purdue squad that's struggled mightily in non-conference action. Iowa went 4-0 against Minnesota and Wisconsin last year, but it's hugely unlikely that they duplicate that feat this year, particularly with Minnesota's noticeable improvement with a healthy Trevor Mbakwe. But ten games against injury-depleted Penn State and Northwestern teams and Nebraska, Purdue, and Wisconsin teams going through rocky rebuilds? That's a definite opportunity and one that Iowa would do well to exploit.

Of course, the corollary of this argument is whether or not Iowa can make it into the NCAA Tournament if they only beat teams they're "supposed" to beat. Presently, their three best wins are over Iowa State, UNI, and Western Kentucky. Big Ten wins will be good, but wins over Purdue, Penn State, Northwestern, Nebraska, and even possibly Wisconsin are unlikely to boost their standing with the selection committee. Can Iowa snipe a win or two over a superior opponent in league play? Maybe. Their best bets are probably home tilts with Indiana, Michigan State, Minnesota, and Illinois. Even if Iowa hadn't struggled away from Carver-Hawkeye this year (and they have), road trips to Ohio State, Michigan, and Indiana would look very daunting. But let's break down the league schedule game by game for Iowa.

INDIANA (12/31/12) -- Call me crazy, but I have a good feeling about this game. Iowa has played Indiana well in recent years, the outside shooting has really been coming around for the Hawks, and I think the atmosphere at CHA will be pretty special for this game. Bring your track shoes, though -- these teams are going to run and they are going to gun. W

at MICHIGAN (1/6/13) -- Things come crashing back to earth in this game, though. Trey Burke and Tim Hardaway Jr. overwhelm Iowa's freshman backcourt and Glenn Robinson shows Iowa just why he's one of the favorites for Big Ten Freshman of the Year. L

MICHIGAN STATE (1/10/13) --The good news is that this looks like a more beatable Sparty squad than we've seen in recent years. The news is that they'e still very good. I think Iowa wins either this game or the Indiana game, but not both. I already called for a win over Indiana in CHA, so... L

at NORTHWESTERN (1/13/13) -- Evanston has brought just as much pain to the Iowa hoopyballers as it has the Iowa gridiron gang. in recent years. Iowa's lost five straight to jNW, home and away, and hasn't won in Evanston since March, 2008. A Crawford-less jNW team is quite beatable, though, and I think Iowa is able to shake this particular monkey off their back. W

WISCONSIN (1/19/13) -- Defending home court in league play will be vital for Iowa's tourney aspirations and I think McCaffery runs it to three in a row over the Badgers with this game. Plus, this game will be the 20th anniversary of Chris Street's death -- if ever there was a time for Iowa to receive a little intangible boost... W

at OHIO STATE (1/22/13) -- This year's Buckeye squad hasn't looked like the all-consuming devourer of Big Ten hopes and dreams this year, but they're still very good and Columbus has not been kind to Iowa over the years (no wins since 2004), a trend I don't see changing this year. L

at PURDUE (1/27/13) -- Two years ago Iowa scored what was then (and still may be) the biggest win of Fran's Iowa tenure in their regular season finale win over Purdue, but West Lafayette has been another destination unkind to Iowa (no wins since 2006) and I think road jitters will do in Iowa here. L

PENN STATE (1/31/13) -- A critical "taking care of business" game for this Iowa team; Iowa probably can't afford any bad losses on their resume and a home defeat to a Frazier-less Penn State would almost certainly qualify as a bad loss. I think Iowa does take care of business in this game, though. W

at MINNESOTA (2/3/13) -- Iowa swept Minnesota last year and I doubt Tubby has let the Gophers forget about that. More importantly, this Gopher team is better -- much better -- with a healthy Trevor Mbakwe, who is likely to show Iowa what a talented and experienced big man can do. L

So at the half-way mark of the Big Ten season that would leave Iowa with a 4-5 record in league play, with no really bad losses (depending on what happens with Purdue this year, I suppose) and one really good win (over Indiana). That would probably be a decent start, especially since the schedule difficulty lets up in the back half of league play.

at WISCONSIN (2/6/13) -- That said, it doesn't let up immediately. Wisconsin has struggled mightily with injuries this year, but they're still going to be a very difficult test for Iowa in the Kohl Center -- a test that I don't see Iowa passing, frankly. L

NORTHWESTERN (2/9/13) -- Here is where the schedule looks to turn around for Iowa. Much like the Penn State home game, this is a game that Iowa likely cannot afford to lose... and I don't think they will. Their depth will be too much for Northwestern to handle. W

at PENN STATE (2/14/13) -- Road games in the Big Ten are always tough, but Penn State is a weakened team without Tim Frazier,and Iowa needs to take advantage of that fact. Here's guessing that they will, which will enable them to snatch a rare B1G road win. W

MINNESOTA (2/17/13) -- As noted earlier, an Mbakwe-led Minnesota squad is a fearsome-looking bunch; can Carver magic carry the day for Iowa? I'm going to say "no" for now. L

at NEBRASKA (2/21/13) -- Again, Iowa simply has to take care of business against teams like Nebraska to have a shot at the NCAA tourney this year. I think they'll make it 2-0 against Nebrasketball this year. W

PURDUE (2/27/13) -- Purdue looks like a very up and down team and while Iowa's young team may struggle with them in West Lafayette, I think the comforts of home will carry them to a win over the Boilermakers. W

at INDIANA (3/2/13) -- This should be another track meet, but Assembly Hall won't be as kind to Iowa as Carver-Hawkeye Arena. Hopefully it doesn't get as out of hand as last year's game at Indiana. L

ILLINOIS (3/5/13) -- This game should be a good test of Iowa's much-improved 3-point defense and if they can keep the Illini from torching them from deep, they can win this game. Here's guessing they'll do just that. W

That puts Iowa at 10-8 in Big Ten play and 21-10 overall, including a big win over Indiana. (EDIT: It also doesn't factor in any potential wins in the Big Ten Tournament, which would certainly be very helpful.) That would probably be enough to get into the NCAA tournament. And that record is by no means terribly far-fetched or pie-in-the-sky; the win over Indiana is the only projection that seems especially dubious, although Butler provided a blueprint for how to beat them last weekend: make a lot of free throws and have a strong shooting performance from long range. Well, Iowa's been a good free-throwing shooting team (more or less) all season and they've been good from deep lately; if those carry over to the Indiana game, a win seems quite possible.

On the other hand, I'm no psychic. The Big Ten season almost certainly won't play out just like this for Iowa (and if it does, I'm heading to Vegas, baby) -- they'll win games I have them losing and lose games I see them winning. This is a young Iowa team that relies heavily on freshmen; inconsistent play is just going to be part of the total package. They're going to have games where they look confused and overmatched, especially away from home.

But this Big Ten schedule is a real opportunity for Iowa, one that (on paper) sets up pretty nicely for them. If they can keep their heads above water through the tough early portion and avoid racking up too many losses -- or having too much damage done to their confidence -- then they might be able to make hay with the rest of the schedule.