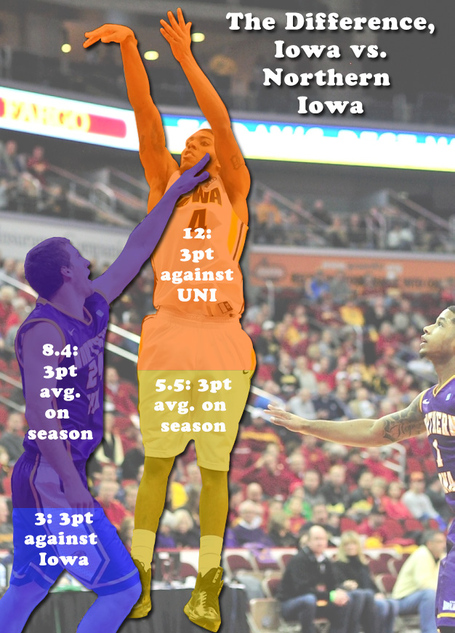 This game was a testament to the power of the three-point shot. On offense, Iowa benefited from some uncharacteristically good shooting from outside, with Devyn Marble and Mike Gesell both making four threes and the team far surpassing their previous average of 5.5 made threes per game with twelve; and on defense, the Iowa coaching staff made a strategic choice to deny outside shots at all cost, a choice which wound up stymying the Panther offense.

The offense for Iowa was a bit uneven (15 turnovers, 13 in the first half), but the team moved the ball crisply and found open looks throughout the game, creating 18 assists and leading to those crucial 12 threes. Apart from the long-range game and the free-throw line, things were downright ugly: Iowa shot 9-24 from two, with Adam Woodbury and Aaron White both struggling to make a dent in the game. Seth Tuttle played Woodbury to a standstill (with the help of some swarming double and triple teams), and Jake Koch locked up White by sagging off him and daring him to shoot from the outside. Both White and Woodbury have no doubt drawn attention from opposing coaches, and the recipe to frustrate them is clear: force Woodbury to pass under pressure and force White to shoot from the outside.

The one player that Northern Iowa didn't have an answer for, though, was Marble. Due to their use of three-guard line-ups (and a simple lack of size), the Panthers were frequently forced to put smaller players like Marc Sonnen, Anthony James or Deon Mitchell on the 6'6" Marble, which allowed Marble to rise and fire from the outside. Marble can struggle against players who match him in size and speed, but UNI didn't have anyone like that. They did their best to harass and double him, but he played a brilliant, controlled game, scoring 30 points on 14 shots and only turning the ball over once.

There were nice contributions from role players as well. Eric May led the team with seven assists and played good defense throughout, and Gabe Olaseni provided some valuable minutes at center, blocking two shots and making two of his own (including a jumpshot!).

But the real story of the game was Iowa's defense. The coaches made a strategic choice that Northern Iowa would not beat them from the three-point line, and it paid off. On pick and rolls and dribble hand-offs, Iowa's defenders fought to stay above the pick and trap the shooter at the three-point line. The Panthers frequently got around the hedge and into the lane, and shot well once they did (25-46 (54%) from two) but Olaseni, White, Marble and Melsahn Basabe did a good enough job recovering and blocking shots in the lane to make the gamble worthwhile.*

* Northern Iowa's two-point shooting is a bit inflated by the end-of-game layup fest Iowa allowed in the final two minutes. The Hawks were so intent on preventing Northern Iowa threes in the final moments of the game that they basically conceded twos. Iowa's free throw totals are also inflated from the foul fest of those last few minutes.

Let's not get too carried away: a lot of Iowa's success boils down to the fact that they made their open threes and Northern Iowa's didn't. Flip a few of those Gesell or Marble makes with a few Rank and Mitchell misses and this would have been a very different game. But the fact that Iowa played competent three-point defense, that they executed a defensive game-plan and worked as a cohesive unit, is a very positive development. Last year, Iowa's opponents took 35% of their shots from three and made 34.5% of those shots; this year, those numbers are down to 33.4% and 28.2%. It's early, so we can't read too much into that, but compared to last year's sieve-like three-point defense, this year's team looks miles better -- which is to say, not terrible.