Discussing the official announcement of Iowa's participation in the 2013 Great Alaska Shootout.

It should come as absolutely zero surprise -- Fran let this particular cat out of the bag several weeks ago, when he mentioned that Iowa would be playing in the Great Alaska Shootout in 2013 -- but it was made official yesterday: Iowa will be competing in the 2013 Great Alaska Shootout. It's an event that's been good to the Hawkeyes in the past -- they won it in 1986 with three wins in three days, capped off by a 103-80 win over Northeastern in the title game. Iowa went on to finish 30-5 that year, with only a ghastly second half collapse against UNLV preventing Iowa from playing in the Final Four.

Iowa returned to Alaska for the Shootout in 1995 and though they didn't win it that year (they lost to Duke in the title game, 88-81), they did record one of their more famous wins of the '90s, a 101-95 upset over then-#1 UConn. Iowa finished 23-9 that year, bowing out in the second round of the NCAA Tournament to Kentucky, 75-69. In those days, the "great" in the Great Alaska Shootout was well-deserved; it attracted top-quality teams and was one of the premier pre-season tournaments going. Sadly, those days are far in the past. Here's what the last three Great Alaska Shootout fields have looked like:

(click to embiggen; the numbers on the right are the current or final KenPom ratings for each team in that respective season)

Those are not great fields. The last two tournaments have featured zero major conference opponents, although 2011 at least featured a decent group of mid-major opponents. Next year's field (featuring Iowa) doesn't look too dissimilar: 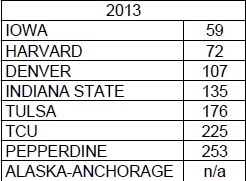 There are two major-conference teams in that field (Iowa and TCU), although one of them (TCU) appears to be one of the worst major-conference teams in the nation this year. There's an obvious caveat to these numbers, of course -- I used the current KenPom ratings for these teams, even though 1) those numbers will change by the end of this season and 2) they don't do much to tell us how good these teams will be next year. Still, on paper, this does not look like a field that will boost Iowa's RPI much. In fact, it looks a bit like the field Iowa faced in the Cancun Challenge this year: 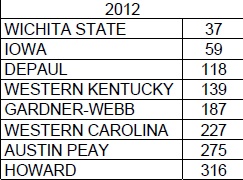 None of the teams in the 2013 Great Alaska Shootout field look as good as this year's Wichita State team, which should boost Iowa's odds of adding another Great Alaska Shootout championship trophy to the trophy case. On the other hand, does a field like this do much for Iowa's RPI? Probably not. Does it do much to prepare Iowa for the rigors of the Big Ten season? Hard to say. Early season tournaments can be an easy way to get experience against solid competition and boost your RPI... but only if you're in a good early season tournament. If Iowa is going to eschew participation in one of those "good" early season tournaments, then I think it increases the pressure on Iowa to try and schedule better opponents for some of the remaining non-conference dates on next year's schedule. We'll have to wait and see on that front. In the meantime... Alaska? WE COMIN'. Lock up your igloos.