The Jamboree 2012: The Pendulum Swings Back

Share All sharing options for: The Jamboree 2012: The Pendulum Swings Back

The Jamboree is your two-week preseason guide to the 2012 Iowa basketball season.

I see the enthusiasm in the ability to actually have an event like the Black & Gold Blowout this year -- and to have a pretty decent-sized crowd turn out for it. I see the enthusiasm in the comments around here -- barely a thread goes by these days without someone pining for hoops. And I see it in the enthusiasm of my fellow BHGP writers to write about the basketball season -- it's no coincidence that this year is going to feature the most comprehensive and (hopefully) interesting preview of Iowa basketball since BHGP started. BHGP began when Iowa hoops was in the infancy of the Lick Era. As that era dragged on, interest in Iowa basketball -- among fans, commenters, and the BHGP braintrust -- steadily eroded. Lickliter's exit halted that trend and interest has steadily been rising since Fran McCaffery took over as captain of the H.M.S. Hawkeye.

The last time there was so much positive interest in Iowa basketball before the season began was probably before the 2005-06 season, when Iowa was coming off an NCAA Tournament appearance and returned two well-liked seniors in Jeff Horner and Greg Brunner (soon to be joined by Iowa State transfer Adam Haluska). But even then the excitement was tempered by the fact that Steve Alford was the coach. On a personal level, ol ' [REDACTED] was a deeply contentious figure among Iowa fans, a figure disliked so intensely by so many fans that it colored their view of the team itself. And on a professional level, there was an aspect of "once bitten, twice shy" with his teams; Iowa fans had played the "high expectations" game with him already and been burned badly (oh, 2001-02 season, you wound me still).

In fact, you'd probably have to go back to the cusp of that 2001-02 season to truly find the last time there was so much enthusiasm and interest in Iowa basketball. At that point, public opinion had yet to turn against Alford. He hadn't yet alienated fans with his behavior during the Pierre Pierce scandal. He hadn't yet presided over a disappointing team -- in fact, that team was coming off one of Alford's greatest triumphs at Iowa: the four wins in four days delirium of the 2001 Big Ten Tournament, followed up by an NCAA Tournament win at the time (Alford's one and only NCAA Tournament win at Iowa, as it turned out). The bloom was very much still on his rose at that point and Iowa basketball was the beneficiary of that love.

Of course, there was another factor that played into the love the basketball was getting in those days: the football team stunk. In the fall of 2001, Kirk Ferentz was in the midst of turning things around -- Iowa was on its way to its first winning season in almost five years -- but at the time no one had any idea of what was coming, of an 8-0 Big Ten season, or an Orange Bowl trip, or three-straight 10-win seasons, or the The Catch. At the time we knew we had a hotshot basketball coach coming off a ridiculously exciting Big Ten Tournament win and a win in the NCAA Tournament, with a team that returned several key figures from that team. We had a football team that had lost three straight games to Iowa State, hadn't had a winning season since 1997, and had a coach that hadn't impressed anyone yet.

So yeah, fall 2001 -- that was probably the last time Iowa fans were seriously, unreservedly enthusiastic about Iowa basketball prior to a season. It was also probably the last time that Iowa fans cared more about Iowa basketball than Iowa football. At least until now. Now things have come full circle -- interest and enthusiasm for football is reaching its lowest ebb in years, while interest in basketball is as high as it's been in a decade. [REDACTED] decried Iowa as a "football school" when he left in a huff for New Mexico; five years later that claim rings far less true.

There's also a curious phenomenon that's taken hold at Iowa over the last fifteen years: the inability to field both a good football team and a good basketball team at the same time. It's something I'd intuitively known, but never really analyzed at length until a reader (thanks, Jason C.) sent me some data this past summer. I tinkered around with it for a while and eventually came up with this: 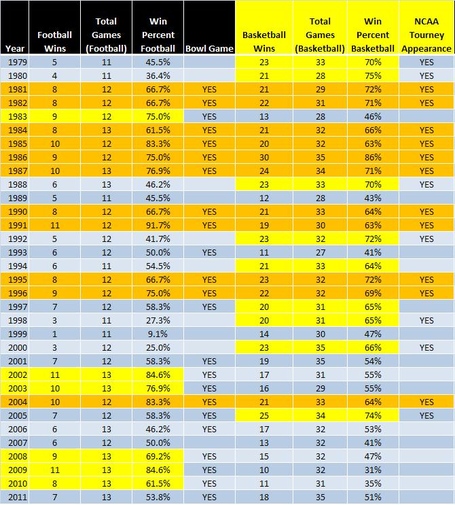 We'll consider any season where Iowa won at least 60% of their games to be a good season. Since 1997, six football seasons and five basketball seasons meet that criteria -- but only one season (2004-05) featured both a good football season (Iowa football went 10-2 and won the Capital One Bowl on the back of The Catch; Iowa basketball went 21-12 and made it back to the NCAA Tournament for the first time in five years). Otherwise, when the fortunes of one program rose, the fortunes of the other sunk. (For the most part; there were also a few years when both teams sunk, relatively speaking.)

As you can see from the table, though, it wasn't always this way: there were four years in the '90s when Iowa football and Iowa basketball each had good seasons and the '80s were such a golden age for Iowa sports that both teams had good seasons at the same time six times and only once (1989) did both teams have a not-so-good year. Returning to those salad days of sustained success in both sports would be nice, although recent history suggests it will be difficult: in the twenty-five years since the 1987-88 season, Iowa football has had just 10 good seasons (defined as winning 60% or more of their games; it's not looking good for 2012 to join that list, either) and Iowa basketball has had just 12 good seasons, with only two coming in the last decade (and none coming in the last six years). In the meantime, though, perhaps we can take solace in the fact that as one sport struggles, the other sport often ascends.

When Kirk Ferentz arrived at Iowa, enthusiasm for Iowa football was at a low ebb while enthusiasm for Iowa basketball was at a fairly steady high. (Remember, if you will, that Steve Alford was brought in to take Iowa basketball "to the next level." Iowa was no rebuilding job or reclamation project; it was perceived as a consistent winner with a strong foundation, a "solid" program that just needed a push to enter into the realm of more elite programs. As it turned out, that foundation was flimsier than it seemed and it was harder than it looked to win consistently at Iowa.) During Ferentz's tenure at Iowa that relationship reversed completely, with enthusiasm for Iowa basketball dipping to its lowest levels ever (perhaps best exemplified by the Illinois game in 2010, when Illinois fans were able to take over an entire section of Carver-Hawkeye Arena) and enthusiasm for Iowa football reaching enormous heights (perhaps best exemplified by 40,000 Iowa fans invading Miami for the Orange Bowl). And now it's flipped again, closer than it's been in over a decade to the situation that existed when Ferentz took the Iowa job. Someday, no doubt, the pendulum will swing back toward football again. But for now it looks like it's Iowa basketball's turn in the spotlight.