Iowa has four veteran linemen returning. After that? It's kind of scary.

Share All sharing options for: ASSUME THE POSITION 2014: OFFENSIVE LINE

Assume the Position is our offseason guide to the Iowa Hawkeyes football depth chart. The math is difficult, so take it from us: As time moves on, we'll know more. That's why we rank the positions from most certain to least certain.

Iowa returns the Big Ten's -- and maybe the nation's -- top lineman, two other starters with all-conference potential and an experienced tackle that has just been waiting for a spot to open.  After that?  Let's ask Kirk Ferentz:

KF on OL: It’s 4 guys who are pretty experienced and then after that, it’s feast or famine. It’s pretty much like the JV outfit after that.

That was KF Lou Holtzing, BTW. He likes his younger OL. It's an OL factory between KF and Brian Ferentz. Seriously.

And that may well be true.  All of those redshirts in a perfect half-Christmas tree pattern above are proof that Iowa has recruited, retained, and trained its offensive linemen well over the last few years, and Iowa should be fine in the near future.  But none of that changes the fact that the backup to the Big Ten's best lineman is a redshirt freshman that was converted from tight end to tackle last year, or that the listed backups at three other positions are former or current walk-ons.  If injuries hit this offensive line, the entire offense could implode before our very eyes.

Yes, he is a former high school quarterback that can lift something like 600 pounds right over his head and spent last season demolishing fools as the best offensive lineman in the conference for anyone that was actually paying attention.  He might be the Big Ten's most valuable player entering the season, and he's 13 unfettered games from hearing his name called on the first night of the NFL Draft.  But is there a comparason to what Brandon Scherff is?

Kirk Ferentz got asked this question at Big Ten Media Days, and his answer was interesting.  Ferentz, who shows each Signing Day how his brain instinctively compares current players to their predecessors, said that Scherff reminded him of Marshal Yanda.  There are obvious similarities.  Both Scherff and Yanda like fishing.  Both are also fond of beards.  And both are mean as hell.  Yanda did this, of course:

...while Scherff had his own moment last year against Western Michigan:

But Yanda blew up that Iowa State guy from the right tackle spot, mostly because he didn't play left tackle until halfway through his senior season.  And as good as Yanda was at Iowa (and despite how good his NFL career has been), he wasn't ever as good as Scherff is now.  Other recent Iowa tackles, Bryan Bulaga and Riley Reiff, were every bit as good technically as Scherff is (probably better, actually) but weren't as strong or as mean as 68.  Bulaga and Reiff weren't making this play when they were at Iowa:

The search for a comp keeps coming back to Robert Gallery, then, and Scherff might be in that class.  He's arguably the Outland Trophy frontrunner, he'll be on almost every preseason All-America two-deep in coming weeks, and he's the somewhere between the second- and third-best overall player in the Big Ten.  And if Iowa is going to do anything in 2014 (just as 2002 and 2003 needed Gallery and 2009 needed Bulaga) against defensive ends like Randy Gregory, it's going to have to be behind Scherff.

That section about Scherff? That was supposed to be Andrew Donnal at year five.  Donnal was rated higher out of high school (a four-star recruit to Scherff's three stars) with the offer sheet to match (Michigan, MSU, South Carolina, Stanford, Wisconsin, etc.)  But Donnal struggled after his obligatory redshirt year, and Scherff quickly moved past him in the offensive line pecking order.

There were flashes of something in a short stint as right guard during 2012; Iowa was at its finest with him and Scherff in the lineup.  But when he went down injured just minutes after Scherff had left the game with a broken leg, Iowa's offense was kaput; by the next fall, Donnal was back down the line.  Brett Van Sloten graduated, and Iowa doesn't have much at tackle, so Donnal finally gets his opportunity on the right flank.

Iowa is holding itself out as "O-line U" these days, and with good reason.  Iowa's track record of getting linemen into the NFL is virtually unparalleled (Alabama might be the only comparable) and Scherff's inevitable selection will only solidify that.  But Iowa's track record with elite linemen is oddly middling.  Here are the four- and five-star linemen that have come to Iowa from 1999 to 2009:

Blake Larsen: Arguably the best line prospect in the country; never started a game
Chris Felder: Four-star tackle from Oelwein; left for medical reasons after two seasons
Mike Jones: Unquestioned success, three-year starter but lost on the 2005 letdown and 2006 meltdown
Dan Doering: Five-star recruit; started one game in four years; if you Google his name "Dan Doering bust" is the first autofill result
Rafael Eubanks: Won the starting center job as a sophomore, lost it as a junior, and won it back as a senior
Dace Richardson: Would have been great had it not been for injuries; put together a solid senior season
Bryan Bulaga: Godlike; played as a true freshman, went pro after three years
Andrew Donnal: See above

That's eight four-star linemen that led to two success stories (maybe a third with Eubanks).  Not exactly a stellar track record.  Fortunately, there are some young linemen on the current team changing that trend.

Blythe was a four-star recruit.  He's also a former first team freshman all-American who received Big Ten all-conference honorable mention plaudits as a sophomore and might well spend four seasons as a starter at Iowa.  There hasn't been a four-year starter on the offensive line in a long, long time.  He also looks like Jaws from the James Bond movies. 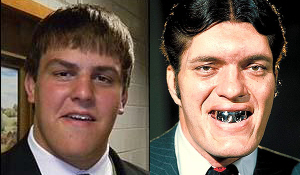 Blythe somewhat surprisingly won the starting right guard spot in 2012, although that might have said more about the state of Iowa's offensive line recruiting in 2008 and 2009 than anything about Blythe as a wunderkind.  He suffered an injury in late September and lost his spot to Donnal, but returned after Donnal's injury to finish the season.  Last year, he replaced James Ferentz and started every game at center.  Now he's in year three, with 22 career starts under his belt and a pretty damn good line around him to coordinate.  The sky's the limit.

Noted college football pundit and insane person Phil Steele loves to analyze returning offensive line starts.  While a running back can pretty much walk in and play in any offense from the first day, an offensive line needs time to develop both individually and as a collective unit, so a line that has played for years together has a huge advantage.  You know how Iowa fielded the best offensive line in the history of the program in 2002?  Almost all of those guys were getting mauled to death in 1999 and grew into that juggernaut.

So when Iowa brings back Scherff (23 career starts), Blythe (22 starts), and Donnal (3 starts) in the most important spots, Ferentz has the solid base he wants.  Now factor in Jordan Walsh's 14 returning starts at guard and it suddenly looks like Iowa's line is less 'competent to good' and more 'good to great'.  Walsh struggled early in his first season as a starter -- as most do at guard in Iowa's zone blocking scheme -- but had settled in by the end of the year and built an obvious rapport with Blythe.  With Donnal's relative inexperience on the edge, Walsh could be extremely important to keeping Iowa's offense running this season.

Welsh, on the other hand, came out of nowhere and staked his claim to the final starting position in spring.  He had a solid-but-unspectacular offer sheet -- Miami, Louisville, West Virginia, Cincinnati, and the parade of basketball schools and MAC schools a three-star recruit out of Ohio can expect -- but the heavy interest/contingent offers from the likes of Alabama and Ohio State might have tipped him as better-than-advertised.  His high school tape highlighted his mean streak on both sides of the ball; if that carries over to this season, Iowa might have the nastiest left side of any offensive line in the nation.  He's a redshirt freshman, so mistakes are to be expected (which is likely why he's being sandwiched between Scherff and Blythe), but his situation could not get more ideal.

Here's a good sign: After coming to Iowa as a 230-lb. tight end, Boettger redshirted, put on 40 pounds, and moved to tackle.  Then he moved in with Brandon Scherff for the summer, which has to be a boot camp on playing offensive line and eating animals you have killed with your bare hands.  He's on the fast track to replace Scherff in 2015, though he probably needs another 20 pounds to be truly ready.

Here is another test of whether the four-star curse remains on Iowa's offensive line.  Ward was a highly-coveted recruit out of the Chicago suburbs and made his way into the depth chart last season as a redshirt freshman.  By spring, though, he'd been passed by other tackles who don't look the part like he does.  He's the co-second string right tackle at the moment, though we think he'd play on the left ahead of Boettger should the worst thing in the history of the world happen.  He is likely -- and inevitably -- destined for right tackle in the long term, regardless.

Iowa got in on Keppy, then a 280-lb. interior line project, extremely early in the process.  His dad is a former Iowa defensive lineman, and he became Iowa's first commitment for the 2012 class.  He was also a top wrestler in Illinois, which likely cemented Ferentz's interest.  There's no doubt he has the frame and the knowledge of leverage.  Now he just needs a spot, a spot that might not open until Walsh leaves after 2015.

Croston walked on in 2012, then surprisingly got some playing time late in the season during comfortable wins over Purdue and Nebraska.  It might have been garbage time, but there are far more coveted recruits on this list that didn't get that opportunity.  Adding 40 pounds as a redshirt freshman and having a dad who was an all-American for Ferentz during his first stint in Iowa City certainly didn't hurt.  But Croston has walked through the door that those things opened, and should be in the mix at tackle in 2015.

Gaul has played in three games over four seasons after walking on in 2010.  And as an undersized backup center with both Jaws and Simmons ahead of him, that likely won't change in his fifth season.  It's heartening to watch a former walk-on make his way onto the depth chart, but that's about as far as the trip will go for Gaul.

Myers, yet another walk-on, surprised everyone with his inclusion in last week's two-deep as second string left guard behind Sean Welsh.  All I know is that he is from Webster City, which has a fairly decent public golf course.  So maybe he's a fairly decent golfer.  More on this story as it develops.