The Hybrid is a weekly preview of every Big Ten game, plus relevant or whimsy games from the national slate.

One of the better opening weekends of college football we've had in a while. Top teams got tested, funny/stupid stuff happened, Wisconsin tried, and we definitely got some memorable performances. Florida State looks vulnerable, Alabama isn't Alabama Alabama yet, and what do we really know about teams like Oregon and Oklahoma? The future may be unwritten, but we 'bout to learn a thing or two this week, boy howdy.

Man, boy howdy is a tough expression to integrate into a sentence.

Washington State at Nevada: Shout out to my Cougars for losing a shoot out at home* to Rutgers in Week 1. I'm only about 30% over Wazzu QB Connor Halliday's 'goal' to limit his interceptions to "one or two" a game, so we're debuting this new feature until I forget about it...

Did Connor Halliday limit his interceptions to one or two a game? Yes.
How many interceptions did he throw? One.
Who did Washington State lose to? FUCKING RUTGERS, MAN -- I ALREADY SAID THAT.

Oklahoma (4) at Tulsa: Normally like to give attention to any Top 5 team playing on the road... but not when a 24.5 point spread is involved.

Western Illinois at Wisconsin (18): Sconnie passed a point in the second half of last week's LSU collapse where I don't think a single good thing happened from said point -- let's call it 'middle of the third quarter' -- until the game mercifully ended. If reading about former starting QB Joel Stave's yips doesn't bum you out enough, allow me to break down the Badgers' final drive against LSU: with 2:24 left in the game and down just four points, Wisconsin needed to drive the length of the field to win the game...

- WHY ARE YOU HUDDLING.

- Fourth down, about 1:30 remaining in the game: they punted.

- After the punt, LSU picked up one first down after three plays and never gave the ball back.

MGoBlog's Brian Cook said the Wisconsin offense's attempted comeback was more painful to watch than a flailing triple option team, and it's hard to disagree. The lesson? You have to develop some semblance of a passing attack to compete in big games. Power running will only get you so far. Even a team like Alabama -- the ultimate "we will bludgeon you" philosophy -- still consistently has QBs, gulp, make plays from time to time. Prime example? Their 2012 game against LSU, ironically. Alabama was up on the Tigers all game (hi, Wisconsin), only to lose the lead late. From there, A.J. and his chest tattoo drove back up the field and led the Tide to victory on the strength of a few necessary big throws. So you got it, Wisconsin? Be Alabama. It's that easy!

McNeese State at Nebraska (19): I know it was just Florida Atlantic, but the Nebraska O was hummin' last week en route to a 55 point showing. Even if none of that impresses you, this Westy catch is undeniable.

Unrelated/related: "Workaholics" star Adam DeVine explained the roots of his Nebraska fandom in an interview with Rolling Stone:

I moved to Nebraska from Waterloo, Iowa when I was 9 years old. I guess I was a Hawkeyes fan but the Hawks sucked asshole at football, so I really didn't care, and truthfully, neither did the rest of the state. Nebraska was a different story though. People were bonkers for Big Red football.

Kansas State (20) at Iowa State: Jesus, Clones -- what an opener. Instead of shitting on Iowa State (sorry, BHGP readership), I'd rather give credit to North Dakota State for Week 1's thrashing. Yes, they took Iowa State to the woodshed at Jack Trice (34-14, holy wow), but almost more impressively is the extension of their FCS winning streak to five games. We can act surprised this keeps happening, but at some point, the small pattern becomes a full blown trend.

Missouri (24) at Toledo: So, the Rams drafted Michael Sam, making him the first ever openly gay player selected in the NFL Draft... but then they cut him. So if he ever ends up getting PT with the Cowboys, which team gets the credit for breaking that barrier in the NFL? The Rams made the initial "bold move"... but, again, they cut him. And yes, the Cowboys might be the ones to get him on the field... but Jerry Jones is a maniac who probably deserves nothing. Will he become our generation's Branch Rickey?! We need a way to sort this one out.

Western Kentucky at Illinois: MIKEY MANIA. Sure, Illinois almost lost to Youngstown State at home in Week 1 (they were trailing in the fourth quarter), but my guy Mikey Dudek caught a TD in his first collegiate game.

I, uh, think it was a blown assignment.

But then he did this!

I promise to stop talking about it when it stops being so awesome.

Akron at Penn State: If you missed the ending of the UCF-PSU game in Ireland, do yourself a favor and watch this 1:55 highlight. In summation, that game was batshit, and Hackenberg is looking more and more like The Man every game. They say he could be the first Big Ten QB drafted in the first round in 20 years. Imagine if Penn State had weapons around him... or if they were allowed to play in bowl games... or if-- yeah, they're still screwed for a while. The good news is they'll probably be in more than a few cardiac-type games from here on out; Hackenberg has achieved must-watch status.

Did New York City survive the overnight party after the Rutgers win?

Seriously. Why are they in our conference, Jim Delany?

South Carolina State at Clemson (23): After a drubbing from Georgia last week, I didn't get a Week 2 preview e-mail from Clemson Tom. Let's hope for the best.

USC (13) at Stanford (14): Does the Pac-12 usually do these weird/cool early-in-the-season conference games? It feels unfamiliar. This is looking like it'll be a tight one, and I like USC and do not like Kevin Hogan.

I listened to the newest Black Heart Gold Podcast, and I'll be damned if the Ball State blogger (Alan Rucker) didn't fully talk me into the Cardinals being a threat. Promising QB, talented WR, speedy d-line, disciplined team football... there's a lot to like. But, man, is this what we're going to do every week? If we're worried about home games against UNI and Ball State, what happens when we go to Pittsburgh, or Purdue, or Maryla--man, our road schedule is so not daunting.

I'm choosing to wrap myself up in the 17.5 spread like it's a protective blanket. Talent, scheme, and execution, be damned -- we're winning this game because we're supposed to win this game. If the BSU defensive line is sacrificing size for speed, maybe this is the week the Iowa running game gets going.

Middle Tennessee at Minnesota: This is gonna sound weird after how headline-y he has been over the years, but last week, I almost kinda forgot Jerry Kill was Minnesota's head football coach.

Michigan State (7) at Oregon (3): Game of the Week. What makes this game so great is it's the Rose Bowl match up we should have gotten last season. My MSU coworker is saying Oregon blowout is most likely, possibly a close game, but no chance Sparty dominates. I love Oregon's O/hate MSU's style so much, it's impossible for me to not be biased when analyzing this game, but let's just say spread for lyfe, peace out Sparty, it's pseudo Rose Bowl comeuppance time.

(That said: Michigan State has proven me wrong on just about everything these past several seasons, so why should it stop now?).

Michigan at Notre Dame (16): For the last three years, my buddy/Notre Dame fan/disgraced SB Nation writer Z.W. Martin and I have made humiliation bets on the Michigan-ND game. This has resulted in...

- 2011 (Michigan win): Z.W. singing Josh Groban's "You Raise Me Up" at a karaoke bar to mock RichRod's banquet crying -- and Groban found out about it 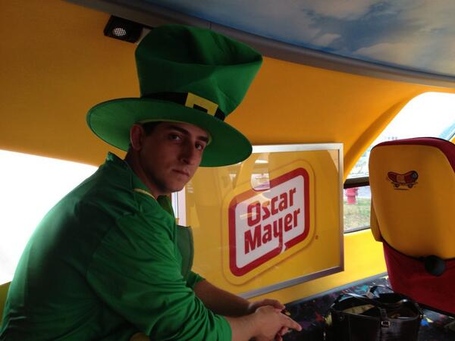 Fights were nearly had, threats were most definitely made, and I found safety in an Oscar Mayer Wienermobile.

- 2013 (Michigan win): Z.W. writing a love poem to Tommy Rees on Twitter and sending it to Touchdown Tommy in individual tweets. The full version can be found on his Tumblr. Here's an excerpt:

Your droopy eyes, not of a stoner, but a leader
One who studies play books until 4 a.m.
A senior who now neglects parties and cops’ groins
You lived
You learned
You will now prevail

So yeah, we haven't made a bet this year, but with it being the last time M and ND are playing for the foreseeable future, I feel like we gotta do it big. Game-wise, ND still has guys suspended, and I'm not ready for Michigan to fuck up everything yet, so I like the Wolverines, and I don't think they'll sweat it too badly. Funchess till we can't Funchess no more.

A&M is breaking in new QB Kenny Hill, and as long as he's exactly as exciting as JFF, I'll be pretty happy.

Boy howdy, did that ever come true. Hill gave us thee signature moment of Week 1: A&M rolling into South Carolina, ripping their hearts out, and announcing to the rest of the SEC (and college football as a whole) that they were most definitely still a force in the post-Johnny Football era.

The offense shredded the Gamecocks defense, and Hill was at the epicenter, amassing a school record 511 passing yards. Johnny christened him "KENNY FOOTBALL" on Twitter, and just as that nickname started to pick up traction, "Kenny Trill" entered the conversation. While I love Kenny Trill -- particularly the fact Bun B weighed in on it -- there's something so charmingly unoriginal about Kenny Football. Seems like Trill is the clubhouse leader for now, though I really don't think we can go wrong at this point. He's a lock to be a Hybrid favorite this season.

Virginia Tech at Ohio State (8): We're in a weird place with Ohio State. I mean, obviously Urban is Urban and the framed contract is the framed contract and the pizza is the pizza, but Braxton is out, this team doesn't have a national championship ceiling anymore, and... I don't know, is it really worth the energy hating on them (all the time)?

In Week 1, someone on some network was talking about Urban Meyer's 25-game regular season win streak since becoming the coach of Ohio State, and... are you kidding me? Context free, sure, it's impressive. But with an ounce of knowledge? It's "everyone go home right now". No conference titles, no bowl wins, no glorifying. Come on, bros.

I do love me some J.T. Barrett, though. Maybe he can be our middle.

Seriously, any ideas on the Michigan-Notre Dame bet, please chime in down below.

Bobby Loesch is a weekly contributor to Black Heart Gold Pants. He is a University of Iowa graduate who also has Michigan fandom (sorry.) and Washington State ties (you don't care). Follow him on Twitter @bobbystompy.